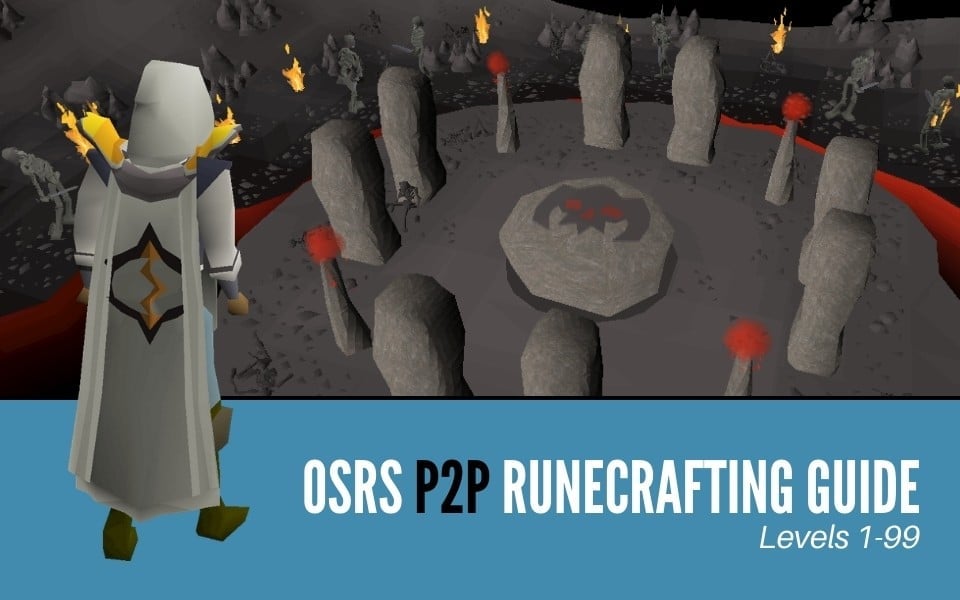 The Free Dictionary defines the word rune as “Any of the characters in several alphabets used by ancient Germanic peoples from the 3rd to the 13th century.” Alternatively, it can mean “A similar character in another alphabet, sometimes believed to have magic powers.”

In Old School RuneScape, runes are the elemental building blocks of all magical spells across the fantasy realm of Gielinor. Sort of like an alphabet that enables you to blast goblins with fireballs by properly spelling words.

Runecrafting, however, isn’t akin to spelling words. It’s more like constructing hundreds and thousands of individual letters you can use to forge any arcane word you wish until the letters run out. And doesn’t that sound way cooler than countless cycles of running between Runecrafting altars and banks?

If you’ve already perused our Free-to-Play Runecrafting guide, some of this section will be a review. But of course, being a member brings with it all manner of novel and stimulating ways to level even the most well-worn skills.

Runecrafting is no exception.

The Essence of Runecrafting

In order to imbue some runes, you’ll need some rune essence and talismans. Mining rune essence requires completion of the Rune Mysteries quest. It’s a fairly short quest with no requirements, so it should be easy to knock out at any time.

As a member, you’re going to want to focus on pure essence instead of rune essence, as it’s required to make any member specific runes. While non-members can purchase pure essence off the Grand Exchange, only members can mine it (with 30 Mining).

There’s a third type of rune essence called Daeyalt essence — introduced with the Sins of the Father quest — that grants a 50% experience boost for crafting runes with it. It’s untradeable, however, and requires both 60 Mining and completion of the aforementioned quest with all its chunky requirements, so it may or may not factor into your 99 Runecrafting grind.

Finally, we arrive at dense essence, which can be mined in the Arceuus essence mine and converted to dark essence by using it on the Dark Altar. To access the mine, you need 25% Arceuus favor, 38 Crafting, and 38 Mining, while converting the essence to dark essence requires 100% Arceuus favor. Dark essence fragments (made by using a chisel on dark essence blocks) are used to create blood and soul runes, so they may come into play late in your Runecrafting career. Dark essence can be time-consuming to obtain, however, so it may not be preferable if you want maximum efficiency.

Runecrafting also requires talismans — or tiaras — to harness the power of the Runecrafting altars and teleport to the realm of magical energies for turning essence into runes. Talismans will occupy an inventory slot and are required for combination runes, while tiaras can be worn. The Abyss can also be used to reach this realm without a talisman or tiara, but we’ll cover that in more detail later.

Talismans can be obtained as drops from certain creatures while tiaras are crafted and then charged with a talisman, granting some Runecrafting XP in the process. If you’re looking to bypass at least some of the grind, both can be purchased from the Grand Exchange.

Lastly, you can jumpstart your Runecrafting adventures with questing. Check out the list below:

Completing these two quests gets you straight to level 23 Runecrafting and to the experientially lucrative lava runes. Another common early game Runecrafting quest is The Ascent of Arceuus, but the effort may outweigh the reward depending on your personal threshold for such things.

You may also wish to consider Lunar Diplomacy for your preparations. While the requirements are lofty, it rewards a healthy chunk of Runecrafting XP and grants access to the Lunar spellbook, which is incredibly useful for Runecrafting. But, like Daeyalt essence, it isn’t a necessity. Just a remarkably potent convenience.

The Perks of Membership

Membership offers a few more unique ways to interact with Runecrafting besides just grinding runes at altars. The first one we’ll look at, the Abyss, offers a high-risk, high-reward approach.

We All Skull Down Here

Access to the Abyss is rewarded upon completion of the aptly named “Enter the Abyss” mini-quest, which you should complete while preparing for the grind. By speaking to the Mage of Zamorak at the source of the River Lum in level 5 Wilderness, you can teleport to the Abyss — a twisted nether realm that connects all of the Runecrafting altars and houses a small menagerie of violent monsters looking to make things difficult.

Once inside, you’ll find yourself in the outer ring. All of the rifts that connect to the altars can be found in the inner ring. To move deeper into the Abyss, you’ll need to perform one of five possible skill checks. All while dodging Abyssal walkers, guardians, and leeches.

The skill checks are as follows:

For the Woodcutting, Mining, and Firemaking skill checks, you’ll need the associated item to make it happen. Thieves and the agile need no such implements to ply their trade. While there are no minimum skill thresholds, having a higher level gives you a higher chance of success.

Once in the inner circle, you can take the corresponding rift to your desired Runecrafting altar. It’s that simple — no talisman or tiara needed.

Note that upon entering the Abyss, all of your Prayer points are drained, so you won’t be able to use overheads to mitigate damage while you’re trying to make it to the inner ring. You’ll also find yourself skulled, which is where the real risk comes in. Just like a PKer, dying with a skull will completely empty your inventory (unless you have the Protect Item prayer active).

To access the Blood Altar and Soul Altars, you’ll have to use a dark essence block on their respective rifts and have previously created at least one rune of each type. Once done, the rifts will remain open for you to use in future Abyss runs.

Members can also craft combination runes, like lava runes and smoke runes. As the name implies, these runes combine several lesser elemental runes into a single rune of potent power. Lava runes are forged from a fire and an earth rune, for instance, and can satisfy a spell requirement for either or both types of rune.

In order to start slapping runes together, you’ll need several runes and a talisman of the base type, in addition to essence for the other half of the equation, then you’ll want to head to the altar of the second type. For example, lava runes require earth runes, an earth talisman, and essence to the fire altar, where you’ll use the earth talisman on the fire altar to produce the runes.

Be careful here, as wearing a tiara to enter the altar can save you an inventory slot, but clicking directly on the altar to create the runes instead of using the talisman will simply create that altar’s basic elemental rune.

Creating combination runes can be expensive as it will use up a talisman in the process. But for the cost, you can crank out some serious XP, even at lower levels. Note that like iron ore, there’s a 50% chance to fail at creating combination runes, in which case the talisman will be destroyed anyway. Wearing a binding necklace can mitigate that uncertainty and guarantee success.

Ourania So Far Away

A unique addition to this OSRS P2P Runecrafting guide is the Ourania altar.

The Ourania altar is an innovative, almost minigame-esque approach to Runecrafting located in a cave west and slightly south of Ardougne. Here, you can run a high-speed Runecrafting train producing randomized runes based on your Runecrafting level. It’s a great way to get quick XP and a lot of different runes stockpiled in your bank.

Speaking of banking, there’s even a bank right in the cave that houses the altar. In order to access it, you’ll need to offer twenty runes of any type. You can specify this type on the fly and even bind it for quick bank access, but this means you’ll need to keep an inventory slot filled with your selected rune. A word of advice: use cheaper runes like air, water, or earth for maximum return on investment.

Besides runes and essence, you’ll want to bring some weight-reducing gear as you’ll be doing a lot of running. Don’t skimp on the armor — you’ll be taking some hits too.

All along the path between the entrance and the altar are Zamorakian monks hoping to make things difficult for you. There is a more meandering, serpentine path that offers a safe route, but the extra time it costs may not be worth the investment in a bit of armor and prayer flicking.

As of the Runecrafting guide OSRS P2P edition’s writing, World 327 is flagged by Jagex as the Ourania Altar world. Make sure to jump over to the Ourania Altar world when making runs (if available) as there’s strength in numbers. With more players as potential targets, the Zamorakian monks are less likely to single you out from the crowd. And if you need a few runes for any reason, they’ll gladly leave a trail of them from the Ourania teleport spot to the entrance of the cave.

As long as you’ve completed Lunar Diplomacy, you can use either the Ourania teleport or teleport tablets to jump right outside the cave. Otherwise, you’ll be using rings of dueling, Ardougne teleports, or any other means of transport you prefer to get as close as you can before running the rest of the way.

Fantastic Runes and How to Craft Them

As you might expect, there are a few ways to proceed from here in our 1-99 P2P Runecrafting guide OSRS players aren’t likely to agree on. Some guides lean more heavily on one route while others take the road less traveled. For our guide, we’ll weave them together like a French braid into a route that certain to net you some solid XP. At least 13,034,431 XP. Any XP beyond that or variations along the way are up to you.

Note that we’ll assume you’re starting at level 23. One way or another, the real grind starts there.

At the end of the day, if you’re looking for the fastest experience, your grind will be lava runes from top to bottom. But perhaps you’ll find a little variety spicier than a bank full of lava runes and a faster 99. Whether you splash in some more Ourania Altar or double runes like nature and law in the later levels or go straight for the finish line, this is your climb. We can only show you the paths to the top.

To summarize, there are many ways to reach level 99 Runecrafting, but lava runes are simply the fastest. Throwing in some Ourania Altar runs or double runes in the later levels can offer some welcome changes in scenery and change in your pocket.

The Abyss is a great way to quickly reach any Runecrafting altar in the game if you can stomach some risk in the Wilderness with a skull and no prayer points.

It may not be the more exciting grind in the game, but for those who reach the peak of Mount Runecrafting, we salute you.

That’s it for our OSRS P2P Runescrafting guide. Until next time, we’ll see you in the next guide!