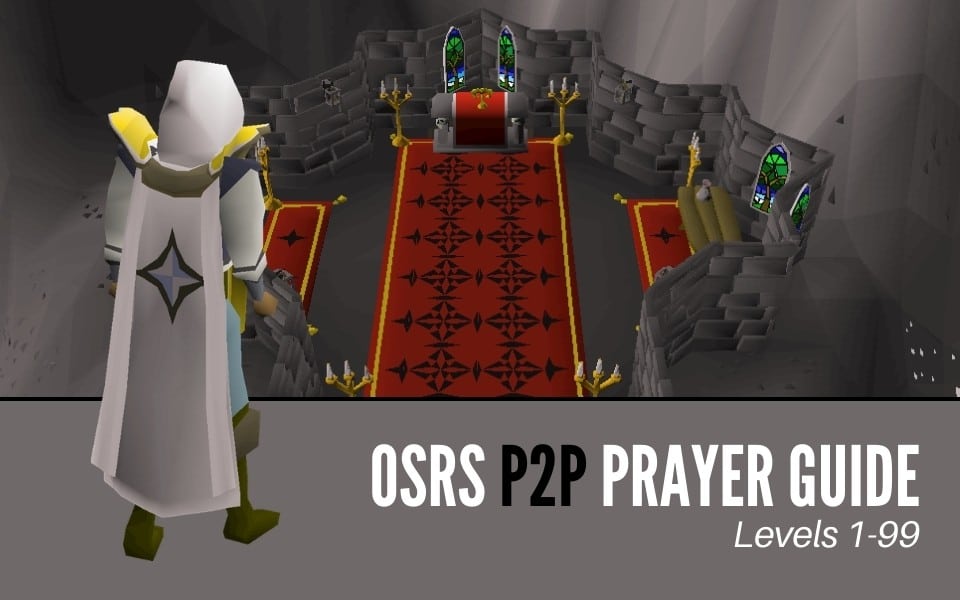 Fold thy hands in supplication, lest you suffer devastation.

Buffs and debuffs are a common trope in MMORPGs. With combat derived from the dice-rolling tabletop games that inspired the genre, one of the most potent tools in your toolkit is the ability to ensure that you roll higher and your enemies roll lower. In OldSchool RuneScape, at least some of ye olde buff/debuff systems can be found in the Prayer skill, whereby you call upon the gaggle of demigods that watch over the world of Gielinor.

But to get the best buffs, you’re going to be spending a lot of time with altars, bones, and ensouled heads. The High Ground Gaming 1-99 OSRS P2P Prayer Guide begins after the break.

Help from On High — Or Low

In OldSchool RuneScape, the Prayer skill provides a pool of points you can tap into to do everything from buff your stats, save an extra item on death, or mitigate damage from any corner of the combat triangle. Your Prayer level unlocks more prayers as you go while also serving as your maximum number of prayer points. Run out of points from too much praying? Run to the nearest altar and recharge or down a Prayer potion if you’re in a hurry. No need to worry about which specific deity — as far as Prayer is concerned, they’re all the same. It’s that easy.

Making the most of the Prayer skill, however, requires some finesse.

Items like the Helm of Neitiznot, the Amulet of Fury, and weapons like the Dragon Mace offer decent Prayer bonuses without compromising combat effectiveness. But be forewarned, good combat items with noteworthy Prayer bonuses can be expensive.

And that finesse we mentioned? Once you get the overhead prayers, you’ll notice that even the heftiest reserve of Prayer points can be drained dry faster than a milkshake in the desert. That’s where Prayer flicking comes in — and it’s a skill unto itself for the veteran OldSchool RuneScape adventurer to master.

That’s all well and good, but this is a 1-99 P2P Prayer Leveling Guide. You’re wondering how we get from here to there — here being fresh off Tutorial Island, and there being the mountain peak and Level 99. Unlike most skills, there aren’t many ways to stack out the necessary XP. Just lots and lots of bones. But fortunately, members have a few more options than non-members to add some variety to the grind.

Bountiful Bones and Other Oddities

The road before the holy aspirant gleams with thousands upon thousands of sun-bleached bones. And you’re going to be laying them all to rest, either buried beneath the earth from whence they came or laid upon an altar for that sweet Prayer XP bonus.

Which bones you use only matters as far as XP and cost to obtain is concerned. Right out of the gate, you’re free to use any bones you like to start farming XP. Except for Superior Dragon Bones, but we’ll cover those later in the OSRS P2P Prayer Guide.

Let’s break down the common bone types and what you can expect from them:

There are other bones, but these are the ones you’re most likely to encounter. Note the “XP at Altar” value — while burying the bones is the tried-and-true method to earn Prayer XP, members can also offer bones at the Wilderness Chaos Altar (or a player-owned house’s Guilded Altar with two lit burners) for the higher XP reward. Who says paying for membership doesn’t pay dividends?

Note that the Wilderness Chaos Altar is likely a one-way trip. But it’s ok; you’ll just get a free trip back to your spawn point. We’ll cover that option in more detail later.

Dragon bones tend to offer the best bang for your buck. So how many would it take to get you from level 1-99 Prayer?

That’s a lot of bones. The cost at the GE is constantly fluctuating, so we’ll let you do the math on how much that would cost out of pocket. Prayer can easily prove to be one of the most expensive skills to hit 99 with, so we hope you’re leveling another moneymaking skill like Mining or Woodcutting.

Getting Wild at the Chaos Altar

Deep in the Wilderness lies a lonely Chaos Temple. While services in honor of Zamorak have long since ended, zealots can still pay penance in bone and blood.

To get here, you’ll want to start from the Edgeville bank and make your way up and left along the edge of the Wilderness. As with all Wilderness excursions, this leaves you vulnerable to attack from player-killers that roam the ashen wastelands. And you can be sure they’ll be keeping an eye out for you. Braving the Chaos Altar is one of the riskiest ways to level Prayer, but it also comes with the greatest reward in terms of 3.5x the experience per bone offered at the altar.

So if you’re brave enough, note up your bones of choice and bring 50gp per note. Or you can just run one inventory at a time. How much are you willing to risk for XP efficiency?

Use the notes on the Elder Chaos Druid outside to get your bones back. But keep your head on a swivel — PKers like to hop worlds looking for someone doing just what you’re doing. Use the bones on the Chaos Altar at the heart of the temple. If you’re lucky, about 50% of the time, your bones won’t even be used up. So that’s bonus XP, and you can drag your inventory of bones out even longer. Score!

Once your inventory is gone, don’t tarry. Hop worlds if you draw aggro and haven’t entered combat yet. One way or another, make your way back to Edgeville and start the process all over again. Good luck!

Is That a Soul in Your Head, or Are You Just Happy to See Me?

Perhaps in your scampers as a member, you noticed that certain monsters drop ensouled heads now. What’s that all about? It’s just another way for members to make the OSRS P2P Prayer grind a little more pleasant.

On the island of Zeah, in the area of Arceuus, there lies a Dark Altar that holds the power to reanimate the dead. After achieving 60% favor with Arceuus, you can access the Arceuus spellbook, which contains the reanimation spells you’ll need to tap into that power.

Should you be wandering the world with the Arceuus spellbook, you can resurrect enemies in the same area that you picked up the head — as long as you killed them yourself. If you’re buying or trading for heads, you’ll have to do your necromantic work in the vicinity of the Dark Altar. Given the nearby banks on Zeah, it’s not a bad assumption to make.

There’s a whole lot of ensouled heads for you to choose from — each one with different GE costs, runes, and Magic level requirements to reanimate — so feel free to find the one that suits your current level and combat abilities the best. These bad boys won’t be happy about being resurrected.

Using this OSRS P2P Prayer Guide and training Prayer by reanimating ensouled heads is slower XP than offering bones at altars, but it might offer just the right variety to keep you focused and on task. Not to mention it offers a great excuse to be leveling Magic concurrently with Prayer.

You’ve buried mountains of bones and risked getting PKed at the Chaos Altar. Perhaps you even reanimated some heads and smashed them again. You’ve unlocked the overhead prayers and are ready to rock and roll in any fight, no matter the corner of the combat triangle. Level 99 Prayer is yours!

Thanks for following along with out OSRS P2P Prayer Guide and grinding out 99s with High Ground Gaming. We’ll see you in the next guide.