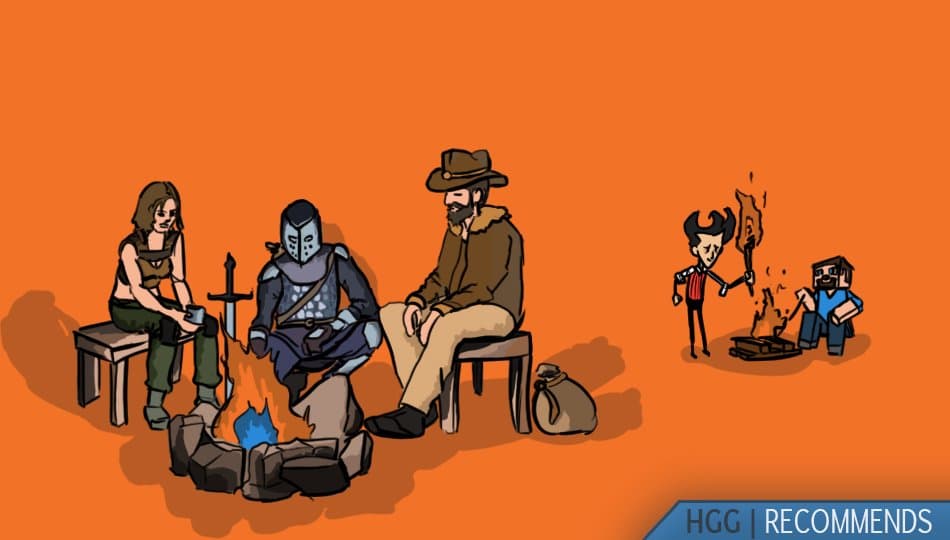 There’s something innately appealing about survival games. It could be the rewarding experience of seeing your base improve as you progress through the game. Or maybe it’s just fun to try surviving for more than a day without the comforts of modern technology (yeah right!).

Whatever the case may be, I can personally spend hours immersed in the sometimes quiet, sometimes nerve-wracking routines of survival games. And I always relish a new opportunity to face the challenge of building a comfortable life in a post-apocalyptic setting.

The mobile gaming experience is getting better and better (larger screens, better tech), and I’ve been getting into mobile gaming more and more. So for this roundup, I’ve curated the top 10 survival games for iOS. Feel free to take a look!

Starting with #10 and ending with our #1 top pick, let’s take check out the best iOS survival games.

Can you survive the harsh and demanding backdrop of the American Wild West? In Westland Survival, players act as the sole survivor of a bandit raid and must use their wits and surrounding resources to make a life for themselves in the wilderness.

Work your way up from building overnight shelters to designing and managing your own ranch, interacting with NPCs and other players (in true MMORPG fashion) along the way. Trade, duel, and prove once and for all who really tamed the West. If you’re game, you can download and play Westland Survival for free from the App Store.

After a widespread infection killed off and zombified most of humanity, survivors are forced to rebuild on the ruins of society. In Last Day on Earth: Survival, players must keep track of life stats that monitor their character’s health and well-being as they attempt to fortify themselves through the zombie plague. Play can be defensive or offensive, as resources can be used to build traps for a stronger home base or weapons for use during raids.

With so many in-game options, Last Day on Earth is one of the best survival games for iPads and larger screens. Check out the different seasonal locations and online multiplayer features, and see if you’ve got what it takes to survive the Last Day on Earth.

Grim Soul is a dark and beautiful survival MMORPG set in a fantasy world desiccated by a disease known as the Grey Decay. Players must survive by collecting resources, building fortresses, and defending themselves from the afflicted that threaten their lives.

The game combines action elements in the survival setting, encouraging strategy in its combat that requires players to adjust their style when wielding different weapons. Heralded as a Souls-like approach to survival games, Grim Soul ensures players stay on their toes in their fight to stay alive. For fans of the fantasy genre, it’s one of the best survival games on the App Store.

When a zombie plague tears its way through the human race, the once quiet and utopic life you lead fades quickly to memory. In this strange new world, the only way forward is to survive.

In Survival: Wasteland Zombie, players must keep track of their stats to stay alive in an unforgiving world. Make use of the resources available to build shelter and equipment, but be careful in your expenditure. Attaining more supplies requires venturing out into a world full of zombies and violent survivors.

Combat rewards a stealthy approach, adding extra damage for sneak attacks and ensuring that players survive longer on their hunt for supplies. Will you be able to find a semblance of normalcy in this apocalypse?

The best survival shooter for iOS

Next on the list of zombie-themed survival games is Dead Trigger 2, a fast-paced title that combines FPS action with survival elements for a more realistic venture into the undead genre. In DT2, players must expand their social network to include different NPCs who can help improve base fortifications and build equipment.

With a vast range of areas, weapons, items, and upgrades available, Dead Trigger 2 ensures that the action stays fresh and engaging every step of the way. The game also offers both a touchscreen and a virtual joystick for a more comfortable and customizable gaming experience.

NEO Scavenger approaches the survival genre a bit differently, focusing on turn-based movement and scavenging. The player awakes in the ruins of a cryogenics laboratory and must explore the surrounding land for supplies to stay alive. Exploration is risky, however, as the player has a limited number of moves, and each move expends energy that makes them more vulnerable. Not only that, but players can be afflicted with any number of negative conditions that must be treated immediately – else it’s game over.

NEO Scavenger demands a bit more strategy and risk-taking than other survival games, but the experience feels more rewarding as a result!

Radiation Island offers players a beautiful, open-world survival experience set in a reality parallel to our own. Stranded in this universe, players must survive on their own, withstanding dangerous threats and a strange environment in their efforts to return home. In addition to zombies and carnivorous wildlife, players must also brave harsh environmental conditions like radiation fields, extreme weather, and a day-night cycle that brings its own series of threats.

The game is primarily single-player, but a multiplayer mode in which players can challenge each other and compete for survival is unlocked after beating the main campaign.

ARK: Survival Evolved turns the futuristic conventions of the survival genre on its head, plunging players into a Jurassic-era adventure that requires them to survive and thrive in a world populated by dinosaurs. Players enter the world naked and alone, armed only with an extremely-sturdy set of fists and a will to live. Gather resources across the world for use in recipes, but be warned. Even the most helpful resources can be dangerous if used improperly!

Players can take on the game in single-player mode to build a solo empire, or delve into online play and use the game’s Tribe system to increase the group’s chances of survival against both rival tribes and prehistoric predators.

Always a classic, players can turn to the pocket edition of Minecraft for the relaxing, creativity-stimulating survival experience that revolutionized the genre so long ago. The game is enjoyable in its vanilla form, but mobile players also gain access to options like Slash commands (which can be used to make minor changes in-game), an online marketplace for new maps, skins, and texture packs, as well as various other add-ons made possible by the mobile port. Due to the exceptional quality of the port, Minecraft for iOS is one of the best survival games for iPhone overall.

Coming in at number one is Don’t Starve, a beautifully-stylized, haunting little game about survival in a very unforgiving world. Players take on the role of Wilson, a scientist trapped in a strange and wild new land until he can rebuild the technology needed to return home. Players can take advantage of the native flora and fauna to customize their survival camp, learning from each punishing perma-death until they become masters of their universe.