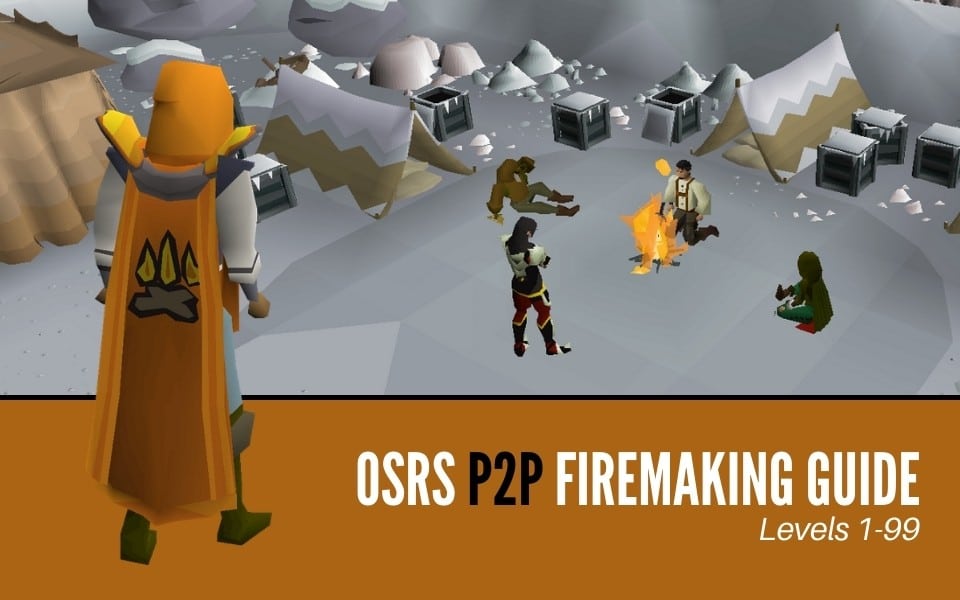 Where there’s smoke, there’s fire. And Seers’ Village can get pretty smoky.

As a member, you have a whole new world of firemaking adventures to experience — equal parts shining, shimmering, and splendid. You aren’t limited to just burning logs anymore: you can create pyre logs, light lanterns, and even take part in the raid-style PvE minigame known as Wintertodt.

But enough talk. If you’re reading this, you’re probably itching to start some fires — so let’s get started with our complete OSRS P2P Firemaking guide!

It feels like only yesterday we covered the F2P Firemaking grind. You may find that most of this is familiar territory if you already sparked a few flames. But if you’re new to Firemaking, then the following is for you.

The key ingredient in all OldSchool RuneScape fires is the tinderbox. And of course, the wood, which you can buy off the Grand Exchange or gather yourself.

Leveling Woodcutting alongside Firemaking would be the ideal “two birds, one stone” scenario. But if you’re just looking to kick some ash, then a tinderbox and logs are all you need.

Like the OldSchool RuneScape P2P Woodcutting guide, you’ll be spending a lot of your time around Seers’ Village. Not just for the bank, but for the convenient access to trees of all tiers, especially if you’re cutting them yourself. If you’re particularly lucky, you might even be able to buy a few inventories of logs the old-fashioned way — by spamming “Buying logs” outside the bank as you make a line of campfires.

More than likely, you’ll be making trips to the Grand Exchange to make any significant purchases. Having 45 Magic for the Camelot Teleport makes the process much easier but isn’t required.

Some of the more exciting variations of the Firemaking theme for members may have other requirements. But we’ll get to those in due time. Now we’d best be setting flint to tinder.

We Didn’t Start the Fire

Right off the bat, some guides advocate for making pyre logs through the early Firemaking levels. It’s a rather click-intensive approach that requires more capital to get started with. Maybe that’s your jam — in which case, click through to the guide linked above.

For our P2P OSRS Firemaking guide, we’ll be sticking to the tried and true, with perhaps a bit of Wintertodt thrown in for good measure. Straight burning logs is simply the fastest Firemaking experience around.

The final slog through Magic and Redwood will be an expensive grind —there’s no way to sugarcoat it. On the topic of cost, you might notice we left Arctic Pine and Mahogany off the list. While the former offers a bit more XP at the tail end of the Teak grind and the latter bridges the gap between Maple and Yew, they’re simply far more costly. But if you’re rolling in dough, you may want to consider slotting them in where appropriate.

Starting at Level 50 Firemaking, you can take part in the Wintertodt minigame. If you’re looking for a change of scenery during the grind, that’s exactly where you’ll want to go.

How Do You Pronounce Wintertodt, Anyway?

Wintertodt is an entertaining, unsafe minigame allowing you to have some fun while earning experience in Herblore, Fletching, Woodcutting, Construction, and — most importantly — Firemaking. It takes place in the icy Northern Tundras of Great Kourend and tasks players with defeating the mysterious entity or force known as the Wintertodt.

But the details don’t matter much. If you want a break from making endless lines of campfires, this is the place.

It’s a slower experience than just burning logs, of course, but you can’t put a price on maintaining your sanity during the Level 99 grind. The key to Wintertodt is to wear warm clothing to mitigate cold damage and ensure you bring some decent food and a few tools of the trade.

Your task will be chopping bruma roots to keep the magic braziers lit. If you’re feeling particularly frisky, you can turn the logs into kindling with a knife for a little experience boost — either way, they’ll fuel the flame nicely. Keep your health topped off with food if the Wintertodt hits you hard, and work with the other players to ensure everyone walks out with a reward. Which fortunately for you is a decent chunk of Firemaking XP with a few other possibilities besides.

OSRS P2P Firemaking Guide: Warm Your Hands by the Fire

The OSRS P2P Firemaking guide looks a lot like the F2P variant, with more wood types and a fun minigame to pass the time grinding. You can speed through the early grind with pyre logs if you have the capital — otherwise, it’s just burning logs up to 50 (for Wintertodt) and beyond.

Those endgame Redwood logs can be pretty expensive to buy off the Grand Exchange. Perhaps you’d like to level your Woodcutting until you can cut them yourself.

Until next time, we’ll see you in the next guide.