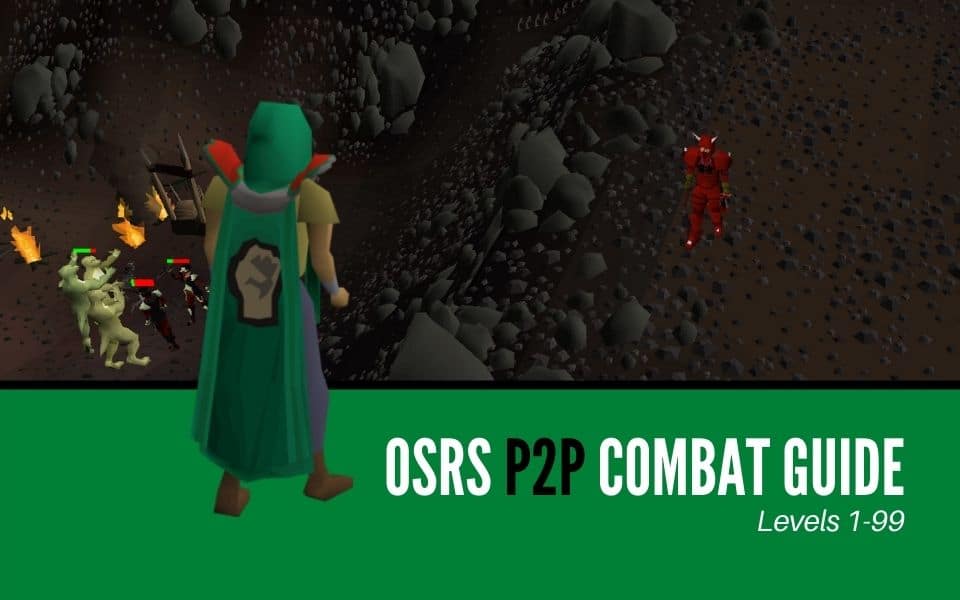 The warrior’s spirit burns eternal. The worthy ones who walk the path stay not their hand from strife, instead embracing the risk of life and limb as they forge a legend worth remembering.

In OldSchool RuneScape, there are three key approaches to conflict resolution — loose an arrow at your target, blast it with spells, or beat it into the dirt with blades and blunt arms. The first example illustrates the Ranged skill and the second one Magic. But perhaps you’re not keen on keeping your enemies at range. You prefer to get up close and personal.

The pursuit of martial excellence brings you face-to-face with all manner of Gielinorian beasts and monsters. Do you have what it takes to defeat them all? It’s time to buckle on your platemail and ready your weapon. The High Ground Gaming OSRS P2P Combat Guide starts after the break.

With Sharpened Steel and Burnished Armor

The hero’s journey begins simply: with a bronze sword, wooden shield, and a whole lot of determination. The grind from 1-99 in Attack, Strength, and Defence looks pretty similar across all three skills, although your approach may differ slightly in terms of targets and equipment.

But before we start that party, we should pluck the low-hanging fruit of quest XP.

Members have quests offering XP in just about any skill. It’s just a matter of the opportunity cost for your time and any other skills or requirements needed to finish them. This includes several low-or-no requirement quests that offer XP in combat skills, and they can be highly rewarding.

Many of the quests below require taking on some tough challenges., especially for a fresh account. It’s ok to skip some quests and train elsewhere until you feel better prepared.

But if you’re ready for the challenge, completing the quests in the order below offers a great jump start on your adventures through this combat training guide for P2P players:

Dragon Slayer (the first) also offers some generous Strength and Defence rewards. But to take it on, you’ll need 32 Quest Points in your back pocket. While that’s a good chunk of time spent questing, it’s nothing compared to the total amount of time you’ll spend grinding out that 99. Not to mention that completing Dragon Slayer is a requirement for equipping the Rune and Dragon Platebodies. Food for thought.

Your equipment is just as important to consider before engaging the enemy. Sure, you have the levels to take on a dragon, but is your gear up to the task?

While Defence governs the armor you’re capable of wearing, and Attack/Strength the weapons, the levels across skills for each armor type look pretty similar.

Starting with the basics:

And, of course, these are just the foundational tiers. There are many weapons and armor pieces — like the Abyssal Whip or the Dragonfire Shield — that don’t fall neatly into these categories. For a more comprehensive look, you’ll want to consult a best-in-slot guide or an item database. We’ll keep this 1-99 Combat Guide OSRS P2P edition laser-focused.

With the whole world of OldSchool RuneScape open to you as a member, where do you start training combat? Like any other damage-dealing skill, you’ll probably start with Rock Crabs or their kin. Where you go from there is up to you.

But you didn’t open an OSRS P2P melee guide for vague notions. We’ll provide you with a clear path forward to 99, but as with all things, variety is the spice of life. Deviating from the path is perfectly fine, as long as you stay the course. Don’t forget to rotate attack styles to level Attack, Strength, and Defence each in turn. Some folks say to knock out the Strength levels first for that max hit bonus, but the real goal is to ensure you’re as effective as possible for your combat level to take on those high-level challenges.

And remember to keep your inventory stocked with food and potions. As they say, “an army marches on its stomach.”

Swap out any objective for another one of equivalent level/difficulty as desired. Instead of Moss Giants, for instance, you could substitute a slew of Lizardmen on Kourend for the Shayzien favor. Or instead of Lesser Demons, you could thin the Yak herds on the Fremennik Isles. Of course, many of the more exotic options will be gated behind quests. Throw some questing in from time to time, and you’ll find more and more opportunities for you across Gielinor.

Many OldSchool RuneScape players choose to train Slayer concurrently with combat as well. It dovetails quite nicely with the grind by offering a rotating menagerie of targets with unique rewards and its own level ladder to climb. While this is just an OSRS Combat Guide, P2P players would do well to have a Slayer guide open concurrently.

And there are plenty of combat-focused minigames to break up the monotony, like Pest Control and the Fight Caves — the latter of which will really test your mettle. By the time you’re in the 90s, you’re comfortably capable of taking on a wide variety of the bosses found around Gielinor for that extra challenge and valuable loot.

Fighting boss monsters in OldSchool RuneScape is just like fighting any other monster dotting the overworld. Except that bosses tend to have their stats turned up to eleven in addition to whatever other tricks they may have up their sleeve. It’s inevitable that a combat leveling guide for P2P players would touch on these unique enemies, as they drop some top-tier late game items in addition to taxing your skills to the absolute limit.

Bosses represent the ultimate threat and the quintessential display of your strength and prowess as a warrior. Slaying one of these beasts will earn you the respect of your fellow players and the pride that only comes from staring death in the face and emerging victorious.

When you feel like taking on some bosses, consider the following (although there are many more to choose from):

The Chambers of Xeric

Deep beneath Mount Quidamortem on the continent of Zeah, the Chambers of Xeric are the first and one of the most popular late-game raids for P2P players to take part in. They can be run solo or with a group, and demand a range of skills as you take on a small army of bosses.

Haunted by the Barrow Brothers, the Barrows on the outskirts of Morytania is a frequent haunt of players as well. A viable option for bossing at a slightly lower level than some other late-game content, the Barrows offers solid rewards and threatens you with the full combat triangle. It requires completing the Priest in Peril and Nature Spirit quests to access.

A classic located in the Members Desert south of Al Kharid, the Kalphites are a swarm of beetle-like creatures that have burrowed beneath the shifting desert sands to escape the heat. While not a raid per se, the Kalphite Queen at the heart of the lair will keep you on your toes and offers some rare drops in return for defeating her. Bring a pair of ropes to descend into the depths, as well as some anti-poison potions.

Live to Fight Another Day

You’ve fought your way across Gielinor and left a trail of carnage in your wake. After slaying all manner of giants, demons, dragons — and a few bosses besides — your name is spoken in hushed whispers in every tavern. There’s a new master of martial combat in the realm, and even the most vicious beast trembles at your approach.

Thanks for choosing High Ground Gaming for your OldSchool RuneScape grinding needs and we hope you found the OSRS P2P Combat Guide useful. We’ll see you in the next guide!