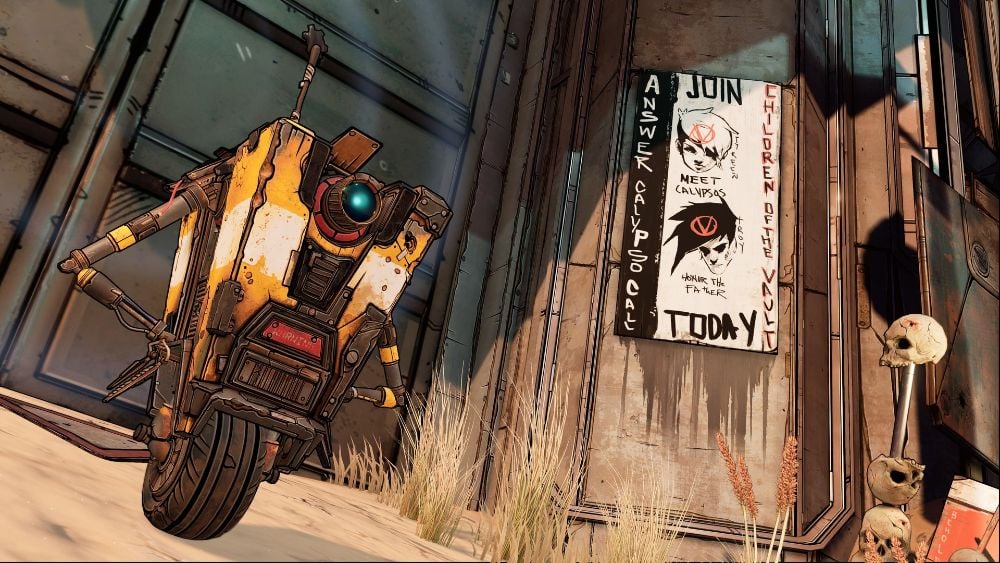 Borderlands is a series that revolutionized its genre. The stylized art and low-brow humor stand out strikingly against the drab background of more traditional FPS games. It was my first introduction to these types of games, and I’ve loved seeing how it’s evolved with each new installment (for better or worse).

Every moment of gameplay is packed with personality, filling in the wasteland’s lonely landscape with colorful commentary and even more colorful graphics. I look forward to what Gearbox has in store for later installments of the series, but I’m delighted with what we have so far.

In honor of this fun and fast-paced franchise, I’ve decided to rank all of the main series installments. There’s a lot of debate as to which titles are the best and worst, so here’s the High Ground view of the Borderlands series.

Starting at #5, let’s dive straight into the list of Borderlands games.

Borderlands: The Pre-Sequel is the only installment of the series not to be developed solely by Gearbox Software, instead being shipped overseas to publisher 2K’s Australian team. The result is a game with a uniquely Australian sense of humor coded into its narrative, which revolves around Handsome Jack’s rise to power and subsequent descent into madness.

In terms of mechanics, The Pre-Sequel plays similarly to its predecessor, Borderlands 2. Since most of the campaign takes place on the moon Elpis (which doesn’t have an atmosphere), the game introduces a few new features surrounding oxygen tanks and low-gravity environments. Players can use oxygen kits to boost their jumps, perform damage-dealing ground slams, and even improve certain stats. Other added features include cryogenic weapons that can slow and freeze enemies, and a machine called the “Grinder” that can be used to exchange a combination of common weapons for guns of higher rarity.

Chronologically, The Pre-Sequel takes place between the campaigns of the first and second games. As such, the playable cast is made up of characters who were either NPCs or bosses in the other installments. This provides for a largely cohesive story that builds onto the already detailed world of the series. While this resulted in generally positive reviews, the game was criticized for an overall lack of innovation that made it seem more like a quirky expansion to the second game than a standalone title.

As the first installment in the series, Borderlands is primarily responsible for the dramatic transfiguration of the FPS genre. Although it’s considerably less saturated than later installments, the stylized art and brighter colors inspired an avalanche of changes that resulted in the more colorful genre we know and love today. The fact that it’s ranked relatively low on our list isn’t so much a reflection of low quality, but a sign of the increasingly high quality of its successors.

Borderlands sets the stage for the rest of the series, introducing the planet Pandora, the mystery of the infamous Vaults, and a cast of characters that transcend the bounds of the first game and become critical players in the overarching story. Gearbox Software advertises the game as a “role-playing shooter,” as it combines typical FPS mechanics with customizable builds and skill trees that are more characteristic of RPGs. Aside from a few plot-specific weapons, loot is procedurally-generated to allow for a wide variety of loadouts.

Borderlands was relatively well-received upon release, praised for being a successful loot-driven shooter with a decent story and solid RPG elements. In particular, the art style generated a lot of attention, employing an experimental technique that allowed the game to stand out.

Borderlands 3 boasts a large and highly diverse cast of characters, welcoming back faces from all three of the previous main series titles, as well as prominent personalities from Tales from the Borderlands. The game features an impressive shift in gender representation, vaunting multiple women of color in the main cast, introducing female Psychos and Bandits, as well as a canonically non-binary playable character.

The game takes place several years after the events of Borderlands 2. The Crimson Raiders are under new leadership, preparing for war against the twin Sirens leading the formidable cult known as the Children of the Vault. Both the Raiders and the Calypso twins are racing to gain control over a slew of new Vaults spread throughout the galaxy, including one particularly massive and well-hidden one called “the Great Vault.” Players must put out a series of fires on other planets in the universe to gain allies against the cult and their ever-growing source of power.

The game’s mechanics are mostly similar to those of previous installments, though there are a few notable additions to character customization and combat. While earlier games featured only one unique skill per character, Borderlands 3 introduces three special abilities that can be equipped and customized in tandem for more varied gameplay. Each skill can be expanded upon using the characters’ skill trees, which are now more robust with further customization options. Combat improvements include crouch-sliding, wall-mounting, and cover mechanics.

Borderlands 3 provided a satisfying conclusion to story and character arcs that spanned the trilogy, though there were a few frustrating elements that kept it from receiving a higher ranking. I personally found the humor to be a bit stale, with the Calypso twins relying on a brand of YouTube cringe humor that was outdated before the game was even released. Some of the character cameos felt a bit meaningless, and the game’s performance issues were enough to make multiplayer frustrating even at the best of times. Overall, however, I was impressed with the game and would still highly recommend it to fans of the franchise.

2. Tales from the Borderlands

Tales from the Borderlands may not be one of the series main installments, but it’s had such an effect on the overall franchise that it’d be a mistake not to include it on this list. Developed by Telltale Games, this spin-off tells the story of Hyperion company man Rhys and con artist Fiona. It details their involvement with the Gortys Project leading up to the events of Borderlands 3.

The gameplay of Tales from the Borderlands relies on point-and-click control of characters, dialogue trees, and quick-time events — unique for a Borderlands game. Though some have criticized TFTB’s similarity to other Telltale titles, others have praised the epic, episodic format for telling a far more personal and engaging story while still retaining the overall aesthetic and spirit of the franchise.

Borderlands 2 is widely considered to be the best game the series has to offer. It builds on all of the things that made the first game successful, continuing the story of the Vault Hunters of Pandora with brighter colors, more offbeat humor, and improved looting and shooting mechanics. This time, players join four new Vault Hunters as they struggle to keep Pandora safe from the irreverent and megalomaniacal Handsome Jack.

Although the base mechanics remain relatively unchanged from the first game, Borderlands 2 introduces many new elements for improved gameplay. Character customization is made more complex with unlockable skins and head designs, as well as a “Badass Rank” system that allows players to upgrade their characters’ base stats through the completion of in-game challenges. The introduction of Eridium at the end of the first game creates a new in-game currency that can be used to purchase various premium items. Trading also becomes an option, both between multiple players and one’s own characters. The latter uses a new Secret Stash system — a shared bank between characters on the same account.

Borderlands 2 was incredibly successful, becoming the highest-selling game in 2K’s history. It earns its top ranking for several different factors, but the true selling point is the phenomenal villain that is Handsome Jack. He alone is a strong representation of the rest of the series, and leaves behind a legacy that’s difficult for the other games to fill with their own antagonists.

Thanks for checking out our ranking of the best Borderlands games! This series can be pretty divisive, so feel free to leave a comment if you’d like to talk more. If you have any thoughts on our list (or recommendations for another series you’d like us to rank), please leave us a comment.

From all of us here at High Ground, stay safe, and happy gaming!