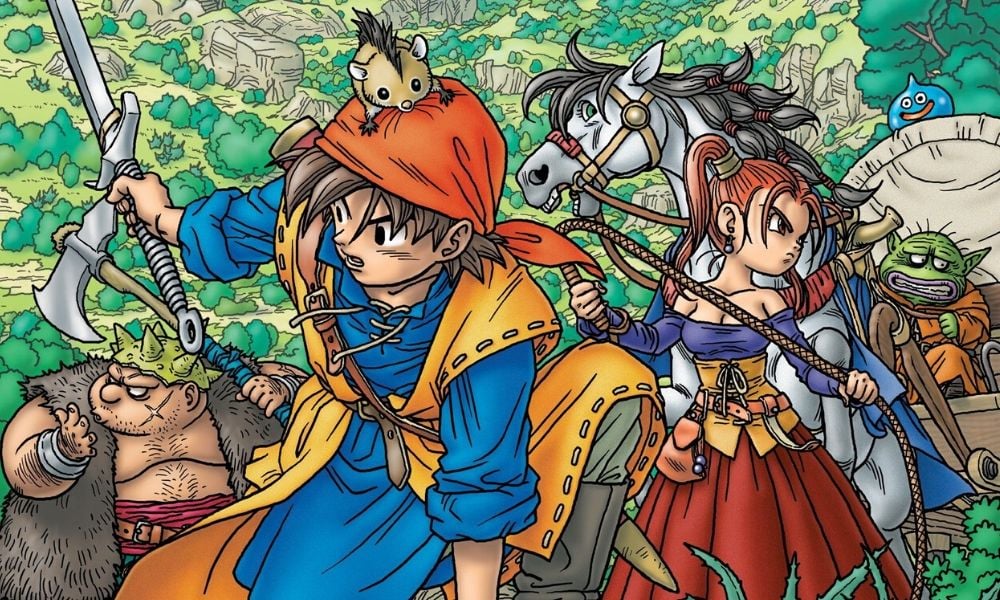 Dragon Quest is one of those franchises that’s persisted since the early years of video gaming. The series has remained relatively unchanged over the years, introducing the occasional new mechanic or graphic rehaul, but overall retaining the same general aesthetic and spirit throughout its many main titles and spin-offs.

The games have seen well-deserved success over the years with consistently high reviews and sales, but the immense similarities among the titles can make it somewhat challenging to rank them all definitively.

The High Ground team isn’t known for backing down from challenges, though, so I dove into the series to get a solid idea of what makes each game stand out against the rest. With the exception of Dragon Quest X, a cross-platform MMORPG that was never localized for Western markets, here’s our ranking of the Dragon Quest titles!

Starting at #10, let’s work our way to the #1 best Dragon Quest game ever made.

Originally titled Dragon Warrior, the first Dragon Quest game was created to bring the fun of RPGs to a broader audience. The game’s premise is a twist on the classic tale of saving a princess from a dragon — being a knight in shining armor is only half the battle. Midway through their quest, the player discovers a far deeper plot that compels them to defeat the evil Dragonlord and make a dark, final choice.

In its efforts to generate more mass appeal, Dragon Quest places a strong emphasis on its emotional storytelling and uses simplified UIs inspired by Western computer games of the time. The game plays as a typical JRPG, with four potential commands that the player can use during battle (attack, cast a spell, use an item, or run). One especially interesting feature about Dragon Quest is that the player character’s stats can be affected by their name. The game employs back-end formulas based on the letters the player chooses, which determines their initial ability scores and the rate at which those scores increase as the player progresses.

Dragon Quest is praised for its revolutionary approach to RPGs and their console potential. The fact that this game holds such a low-level ranking on our list shows just how much the franchise lived up to the potential established by its first installment.

Dragon Quest II continues the story of its predecessor, following three of the hero’s descendants one hundred years after the events of the first game. After the evil wizard Hargon attacks Moonbrooke Castle and transforms the princess into a dog, the prince and his two cousins set out to find a way to defeat him. Their journey brings them to the continent Alefgard, where the first game took place. There, they receive helpful information from a surprising source that points them to the power they’ll need to reclaim their kingdom.

The game is styled as a JRPG, though there are several notable improvements on the mechanics and elements of the first game. The game features multiple heroes and a greater array of spells and items, as well as a more open-ended exploration system that makes use of warp gates. Battle Mode also introduces groups of enemies, allowing for more varied showdowns than the one-on-one battles of the first game.

The first three games in the Dragon Quest series tell a complete and cohesive story. Where Dragon Quest II acts as a sequel to the first game, Dragon Quest III serves as a prequel. It’s set many years before the events of the first game (and in an entirely separate world), with the player assuming the role of the child of a legendary warrior. On their sixteenth birthday, the hero is tasked with completing their lost father’s quest to defeat the wicked fiend Baramos. A darker threat lurks in the shadows, however, forcing the hero to prove their mettle in the face of a hellish apocalypse.

Dragon Quest III introduces the class system that’s since become a staple of the franchise, allowing the player to recruit party members and round out the group’s battle abilities. These recruits aren’t necessarily connected to the game’s story, but can be swapped in and out of the party at will to optimize combat efficiency. A character’s class affects their stats and the spells they can learn, though their class can be changed and customized with the use of specific items or after attaining a certain level. The player character must always be the Hero class (though they can choose to be either male or female); other classes include Soldier/Warrior, Fighter, Pilgrim/Cleric, Wizard/Mage, Merchant/Dealer, Goof-Off/Jester, Sage, and Thief.

7. Dragon Quest VII: Fragments of the Forgotten Past

Dragon Quest VII is the last title in the franchise initially released under the Dragon Warrior name, with all future installments adopting the now-popular Dragon Quest branding. The player follows the Hero and his friend Kiefer through their journey to the past, set on restoring the lost continents wiped out by the Demon Lord. The game’s been praised for its extensive campaign, with over a hundred hours of gameplay even without sidequests.

The gameplay of Dragon Quest VII remains relatively similar to earlier titles, though with a few notable exceptions. The player is now able to talk with party members both in and out of battle, getting hints about plot and strategy throughout the game. Exploration is expanded beyond one large world, instead focusing on separate continents that can be explored in both past and present once the player has completed the necessary quests.

Dragon Quest IV originally released for the Super Famicom in 1995, but didn’t get a Western localization until the remake for the Nintendo DS alongside Dragon Quest IV and V. The story follows the Hero and his companions as they struggle with a mysterious amnesia, unable to remember themselves or their lives before their quest. The Hero discovers a portal to a mirror dimension known as the Phantom World, and must uncover the truth of his and his friends’ identities to save both worlds from a threat that would conquer them both.

Dragon Quest VI is remarkably similar to its predecessors in gameplay, with no new mechanics or concepts introduced. The primary additions to the game are the bonus dungeons that the player can access upon completing the game, and new animations for monster attacks.

As the title suggests, the main story of Dragon Quest IV is divided into separate chapters. Each of the first four chapters follows one of the Hero’s eventual companions, providing backstory for their quest and setting them on their journey toward the fifth and final chapter.

Dragon Quest IV’s fifth chapter introduces the Hero, as the player embarks on a quest to defeat Estark, the Ruler of Evil. The game’s later remakes include a sixth chapter in which the player aligns with one of the game’s antagonists to help them on a personal quest and restore order to the world.

Dragon Quest IV introduces an AI “Tactics” Mode that allows the player to set gameplay strategies for their party members. These tactics can be used to help control the flow of battle even when the player takes over as the Hero, and the party members become NPCs. This game also marks the introduction of casinos, which host several mini-games that offer rewards for the player to purchase.

Dragon Quest V boasts a rich and expansive story, following the Hero character from the moment of his birth until shortly after he marries and starts a family. The player follows the Hero across various time skips, setting up crucial moments in his ultimate journey. Throughout the hardships of his life, the Hero must seek the truth behind a legendary lineage and restore the balance that monsters have torn from the world.

The gameplay of Dragon Quest V remains relatively similar to that of earlier installments, expanding on the Tactics mechanic from Dragon Quest IV and allowing the players to set individual tactics for each character (rather than using a single strategy for the entire party). The game also introduces the ability to tame monsters and have them join the party for help with battles and leveling.

Dragon Quest V is also the first title to offer a bonus dungeon, allowing the player to dive back in after beating the primary campaign.

Dragon Quest IX was the first installment in the series to introduce local multiplayer, allowing four players to venture off on a quest together. Players take on the role of a customizable Celestrian who has fallen from their heavenly home in the Observatory after withstanding an attack. Using the last bit of their powers, players must collect a mystical energy known as Benevolessence to return home to the Observatory and face off against the evil that threatens it.

The gameplay remains relatively similar to earlier installments, though with the added exception of having multiple player characters and enemy spawns in place of random encounters. Battle Mode also introduces a combo system that allows players to stack multipliers when dealing identical attacks to an enemy.

Dragon Quest XI is considered to be one of the best installments in the series, though its devotion to traditional design and gameplay has been polarizing. The player takes on the role of a hunted hero known as the Luminary as he embarks on a quest to recover the heart of Yggdrasil and save the land of Erdrea from darkness.

As previously mentioned, the gameplay is vastly similar to previous installments in the franchise. The primary differences are that the game foregoes random encounters in favor of spawned enemies, and 3DS players can toggle between 3D and 16-bit graphics before entering Battle Mode.

Dragon Quest VIII is my personal favorite in the series — the fully-integrated 3D world and cel-shaded graphics were something to behold, and I was immediately hooked.

The story follows the Hero and his companions on their quest to lift a curse on the Kingdom of Trodain. The Hero is accompanied by King Trode and his daughter Medea, who have been transformed into a troll and a horse, respectively. The Hero must confront Dhoulmagus, the wicked court jester of Trodain, who has stolen the ancient scepter that maintains the curse.

Not only was the shift to a 3D world a revolutionary approach that easily earns the top spot on our list, but it also made for some notable changes to the game. Rather than playing from a top-down perspective, the player can explore a fully-integrated 3D map complete with camera controls. The battles shift between first-person and third-person views, following the same text-based model as previous installments while allowing for more complex attack animations from the characters and monsters. Battle Mode also introduces a new turn option called Tension, in which the player can delay a character’s turn to make their next attack more powerful.

Thanks for checking out our ranking of the Dragon Quest titles! If you’d like to talk about any of the games in further detail, or if you have a different order in mind, please feel free to leave a comment.

As always, we here at High Ground wish you the best. Stay safe, and happy gaming!