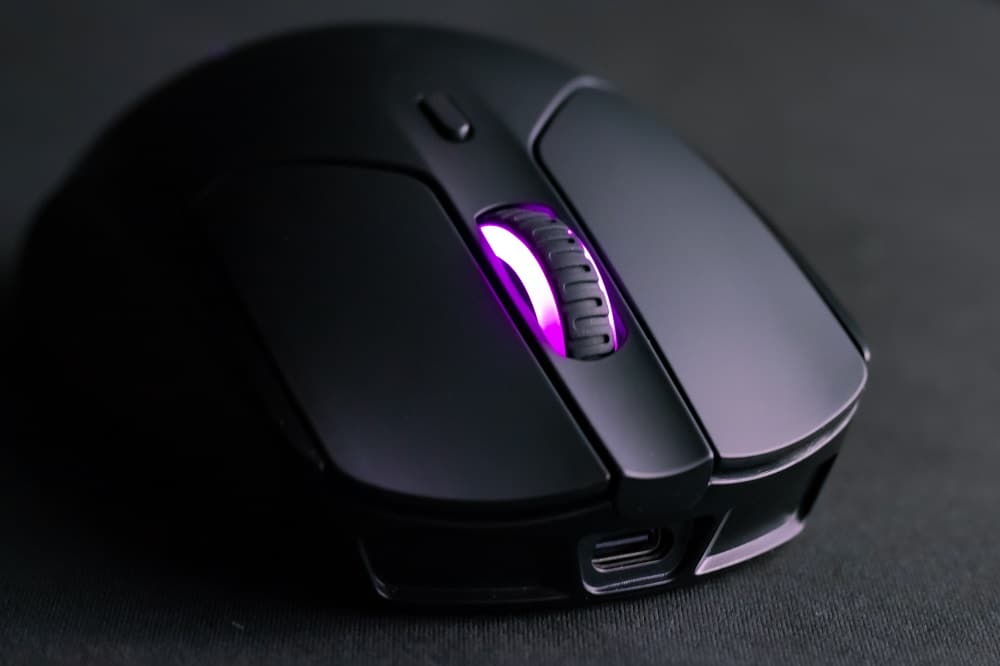 The Pulsefire Dart Mouse is the latest gaming mouse from HyperX. It is a right-handed, ergonomic, wireless mouse. In this hands-on review, I’ll share my experience using the mouse and playing Fortnite and Teamfight Tactics with it. I also talk about how well the optional wireless charging base worked and if I think it’s worth the extra cash.

When unboxing the mouse, I was pleased by its size and weight. It’s on the larger side of a medium-sized mouse but is surprisingly lightweight. It came with a small dongle, adapter, and the charger cord. Mice saturated with buttons aren’t my thing, so I was pleased that it only had the two extra on the side, aside from the standard left and right clicks. As with most mice, installation is easy: just plug it in, and you’re ready to go. The mouse’s design is pleasingly simple, and it had me at first glide.

Moving on to the HyperX Chargeplay Base, the box contained the dock, a second identical charger cord, and a USB wall charger.

The HyperX Chargeplay Base is a bit finicky. It takes a bit of wiggling to get the mouse just right to initiate charging. I found that successful charging required me to position the back of the mouse on the charging base, which causes the front to hang off the base. But even when I had got it right and the mouse had been charging and untouched for a few minutes, it still ended up blinking red a few times. Upon scanning through the quick start guide, I found that red blinking indicates a “general error,” which didn’t do me much good.

Ultimately, for me, the inconsistent charging of the Chargeplay Base seems to be more of a hassle than it’s worth (and unnecessary clutter). Simply plugging in the charging cable included with the Pulsefire Dart never failed me. The charging port is located directly on the front of the mouse, so it can be used as a wired mouse while it charges.

The Pulsefire Dart mouse is sleek, and the RGB accents don’t overshadow its smooth curves. In hand, it glides smoothly, and the button clicks feel satisfying and responsive. The padded leather-like sides are pleasantly integrated and shows that HyperX is taking ergonomics seriously this time around.

On the one hand, the plastic top side of the mouse doesn’t inspire much confidence in the longevity of the mouse. On the other, gazing upon the mouse inspires images of a space-age style tank that’s ready for business. It looks cool, but time will only tell if the materials HyperX incorporated in the design will hold up. Plastic seems to be the go-to material for many of the top gaming mouse manufacturers, so they’re probably resting on safe ground here.

Personally, I’d trade the LED lighting on a device for longer battery life. The battery life is pretty good (estimated at 50 hours with lighting on), but I always forgot to stick it back on the charger after I was done gaming. I reached out to our contact at HyperX, and they said the lighting could be disabled with their NGENUITY software which extends the battery life to around 90 hours. Not shabby!

Unfortunately, I could not get HyperX’s NGENUITY to work. NGENUITY is the app used to personalize the color of the lights and other settings on the mouse. After much troubleshooting, I discovered that while the mouse supports Windows 7 through 10, the app only supports Windows 10.

As of the time of this writing, the majority of review scores for this app are 1 star. Many reviewers are encountering the same few errors and issues with the program. The most common complaint among the reviews is that the app software must be open in the background for the profile settings to be active. For many gamers — particularly competitive ones — concerned with maximizing FPS and performance, this is a significant downfall. Granted, the software is in beta still, but obviously the mouse is not. I’m hoping they put some more time into the software and make it a priority to improve it.

The Pulsefire Dart operated to my satisfaction. It’s a capable gaming mouse that performed well in my testing. The scroll wheel is not too sensitive and offers a necessary level control. When bound to one of your more vital in-game abilities or functions, I was able to press the two buttons on the side quickly. I think this gave me a split second advantage on my opponents.

The mouse seemed to disappear during my time playing Fortnite and Teamfight Tactics, becoming a bionic extension of my arm and hand. It’s the perfect fit for my hand. Its lightweight lends itself to gliding effortlessly across my mousepad without any hiccups. Needless to say, I didn’t find myself wrestling with the mouse during gameplay (or noticing any tracking issues), even when things got intense.

HyperX wisely placed the side buttons, away from the active and resting hold positions. It’s a welcome change from my experiences with other mice that have overly sensitive or poorly placed forward and backward click buttons. The leatherette side padding on the mouse is very comfortable, and the texture feels capable. I never felt like it was going to slip out of my hands when things got heated in the final stages of a Fortnite match. Most gaming mouse brands will promote an ergonomic design, but the Dart delivers on that promise. It could just be the size of my hands, but it never failed me throughout my gameplay with it.

The asking price is a little high for its feature-set; the fact that the Ngenuity app is still in beta and the wireless charging pad isn’t included doesn’t help. Unless you have a couple Qi-enabled devices, I’d recommend skipping the wireless charging pad for now. That said, the HyperX Pulsefire Dart still delivers great gaming performance in an ergonomic form factor. It performed well in the games I played, and I didn’t experience any discomfort even after a couple hours of gaming.