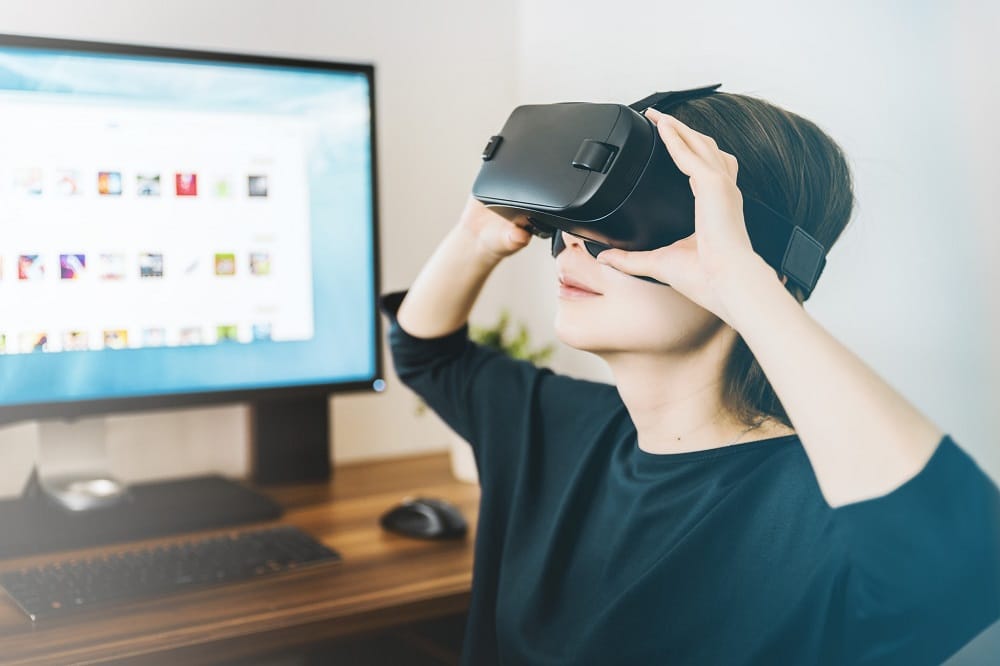 In this article, we are going to show you some of the best PC VR games. The VR industry is gaining more and more field in the tech market. Nowadays, there are VR headsets for Playstations, PCs, and smartphones. While they are different when it comes to prices and features, all of them have a thing in common: they allow you to experience games and apps in a new way.

If you want the latest cutting edge tech we recommend VR games for PC. The PC platform offers the best graphics and VR experiences. Virtual reality games are amazing because they allow you to enter the game and feel as if you really are the main hero. If you end up enjoying VR and want to try out games that you can play with your friend, check out a review of the best multiplayer VR games on Top Best VR.

Now, let’s see which the best PC VR games are for testing out this new gaming medium.

If you love music and you have the talent to become the lead guitarist in a rock band, then this VR game is for you. There is also a regular version of Rock Band. However, that doesn’t compare to the VR game which is a lot better. One of the best things about the VR version is that you can pick what cords you want to play and just have fun.

One of the best controllers for this game is the Oculus Touch. It can be mounted on the Rock Band guitar and you can easily play for hours. However, you need to remember that this is not like the original version of the game. It is not multiplayer and you can’t select another instrument besides the guitar.

2. House of the Dying Sun

This is a game for those who want to play the bad guy for once. You will need to get the good guys and make an example out of them. This is a space dogfighting game where you are a merciless imperial killer. Get this VR game if you want to hunt down the enemies and hear an amazing soundtrack while doing so.

Reviews of the House of the Dying Sun show that it works best with Oculus Rift or HTC Vive. You won’t need any special controllers, just the ones included with the VR headset and your PC’s keyboard and mouse. Also, this game is available in the standard version as well.

Another great VR game for those who want to shoot their virtual enemies is the Robo Recall. While there are a lot of games where you can use 2 guns to shoot, this is a more polished game. In this game, you will be a recall agent who needs to clean robots off the street. Also, you will benefit from a futurist scene.

For those who like fight games, they will be pleased to know that you can also rip the robots apart. You don’t always have to shoot them. It is up to you how you handle the bad robots. For this game, you will need Oculus Rift and the VR motion controllers because you will need to shoot with both hands.

This is one of the first VR games to appear, even before the VR headsets were released. The first beta version works amazingly with the first version of Oculus Rift. Now, their finished game version doesn’t disappoint. You can also get the Horizon expansion if you enjoy this VR game.

This is a great game for sci-fi fans and for those who like to explore the galaxy. This game is also available in the regular version but it is far better in VR. Elite: Dangerous can be played with Oculus Rift or HTC Vive and you will need the controllers, the PC’s keyboard, and the mouse. It is also recommended that you purchase the flight sticks.

If you enjoyed the regular screen version of Thumper then you will love the VR version. Of course, the VR version is much better because it is more intense and you feel like you are inside the game. This is another music game great for people who are passionate about music instruments and different songs. While it might seem easy to play, it is actually a pretty stressful game.

This is not a good game for those who like relaxing music games. However, if you are looking for an abstract and intense game, Thumper is the one for you. Another great thing about this game is that you can play it with Rift or Vive and you only need the standard controller.

Want to climb a cliff without lifting a finger? If the answer is yes, then The Climb is the game for you. We couldn’t create a list of the best PC VR games without The Climb. Since it is in VR you will feel as if you are climbing the cliff. The best thing is that you won’t break a sweat doing so. This is a game where you need to focus a lot because there are some almost impossible moves you need to make.

This game is great for people who love to do sports and for those who don’t want a VR game that involves shooting. If you have a sensitive stomach it is best to avoid the game because these are some shifting cliff-faces that might make you dizzy. For this VR game, you will need the Oculus Rift headset and the standard controllers. The motion controllers are recommended also.

Everybody tried Minecraft at least once in their lifetime. If you enjoy the regular version of the game, then you will love the VR version. This VR game is easy to play, especially if you are used to the regular screen version. You have two options for this game. Either you mod the base game to work with HTC Vive or you get the VR edition which works with Oculus Rift.

This is a simple game and it is best for people who want to learn how to play VR games. It comes with a basic concept and all you have to do is build objects and send them toward the target. There is also a regular version of this game if you want to see how it works before you purchase the VR version.

You will need to use the VR motion control for this game. This is not a game where you sit on a chair and only play with your hand. You will kneel to the ground to assemble small pieces of the weird objects you are building. Unfortunately, this is not a good game for those who are looking for a game with deep narrative but it is a great option for people who like to build stuff. It works on both Rift and Vive.

Do you love zombie apocalypse movies and TV series? If the answer is yes, then you should look for Arizona Sunshine immediately. It easily made our best VR PC games list. This game will show you for how long you will survive if a zombie apocalypse strikes. You will have to shoot zombies but you only have a limited amount of ammo so use it wisely. This game can be played by two users and it is much more fun when you play it with a friend.

This game is great for those who want to shoot zombies and play with a friend. However, if you are looking for an arcade, fast-moving game this is not a great option. This tense survival game works on both Vive and Rift and you will only need the motion controllers.

If you always dreamt of being a member of the Star Trek bridge starship, then you should purchase this game as soon as possible. You can also play as the captain of the crew and you will be able to give orders to the rest of the crew. Play this game in multiplayer version to enjoy it with your friend.

This VR game makes you feel as if you are in the starship. It is an amazing game for Star Trek fans and for those who like to play games with their friends. Unfortunately, there is not a lot of action in this game so it is not a great option for people who love action packed games. Purchase the VR Motion controllers because you are going to need them. You can play on Vive or Rift and cross-play is supported.

There are a lot of virtual reality games of PC you can play with Vive or Rift headsets. Also, if you are not in the mood for playing games, you can check out some of the best VR apps. Some of these include Kingspray Graffiti, Google Earth, and Tilt Brush.

Make sure to read an in-depth review of the games you want to purchase and see what controllers you need. Also, remember that some of these games won’t work on HTC Vive. VR games and apps are a great example of how technology can make our life better. Enjoy your VR experience but make sure to stop playing if you experience nausea and dizziness.

Enjoy our list of the best PC VR games? You’re sure to love our other game roundups as well: