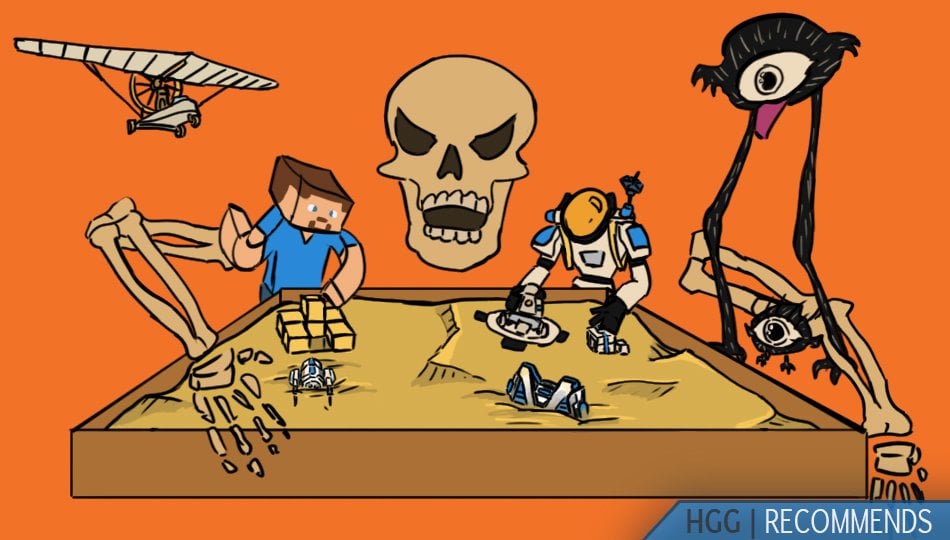 Do you remember playing in the sandbox as a kid? It was a land of possibility where you could build a sandcastle and rescue the princess or dig deep underground for buried treasure. The activity didn’t really matter – you were free to explore and let your creativity shine. If you miss that sense of wonder, we’ve got good news: the best sandbox games capture this classic childhood experience and turn it into an exciting video game adventure.

The best sandbox games feature open-world environments that are ripe for exploration, resource collection, and crafting. They’re designed to give players full control over their gaming experience and instill a sense of profound intrigue and adventure. Naturally, the genre is insanely popular and features a range of best-selling and highly rated titles. To help you navigate the maze of great options, we’ve curated a list of the best sandbox games on the market. If you’re ready to roam free and light that creative spark, let’s check ‘em out.

We’ve curated the following list of sandbox games to spark your creativity and help you find your next favorite title.

Our pick for one of the best online sandbox games

Rust is an online game that drops players into the middle of the wilderness with one single objective: do whatever it takes to stay alive. Players must manage their thirst, hunger, and health while developing an overarching plan for survival. Craft items to help you on your journey, and build a fort for shelter from the ever-looming zombies. Oh – and watch out for enemy players hellbent on stealing your resources for themselves. Rust boasts a large player base of over 5 million people, and it’s available for every major operating system. Plus, with online servers that can hold over 100 people, Rust is arguably the best sandbox MMO around!

Our pick for best sandbox game on Steam

Originally released in 2004, Garry’s Mod remains a fan-favorite on Steam due to its innovative sandbox elements. There are no objectives, and players can create objects, summon NPCs, equip items, and do whatever they please. The unique physics engine lays the framework for endless fun and excitement, and the large library of available spawns creates endless hours of entertainment. The game continues to receive updates and patches, and there’s still an active community to join and play with.

Our pick for one of the best sandbox games PS4

The latest addition to the series lineup, Just Cause 4 takes the sandbox adventure you know and love and lifts it to new heights. Players assume control of Rico Rodriguez, a jack-of-all-trades skilled in special-ops procedures. Move about the giant open-world map and wreak havoc in assorted vehicles, or try your hand at one of the many weapons like guns and rocket launchers. The game also features an exciting plot that adds direction and keeps players focused on an overarching objective.

Our pick for one of the best sandbox games PC

If you’re a fan of online sandbox games, Scrap Mechanic for the PC is an excellent option! Drop into a machine-filled open-world and build your own adventure. The game features hundreds of building parts that you can use to create objects ranging from futuristic vehicles to incredible moving houses. Play online with friends and engineer to your heart’s content. Scrap Mechanic is currently available on Windows only, and you can download the game from the main website.

Our pick for one of the best sandbox games for Mac

Do you enjoy online PC-based shooters that feature strategy and a hint of realism? Well, Arma 3 offers all of this and more. The game is set on a group of islands in the South Pacific sometime in the 2030s. Players assume control of Ben Kerry, an army corporal in charge of missions ranging from infiltration to full-on military attacks. Explore the many miles of island terrain, and take part in the countless mini-objectives and storylines along the way.

Our pick for one of the best sandbox games iOS

Don’t Starve is one of the best sandbox survival games bar none. The objective? Assume control of the scientist Wilson and stay alive for as long as you can! The game is set in a dark world full of monsters and a variety of nasty obstacles. You’ll need to remain healthy and emotionally stable throughout your journey or risk being devoured. The gameplay is heavily influenced by Minecraft, while the artwork has a Tim Burton-esque vibe to it. The game is available for PC and every major console, and it’s adored by fans and critics alike.

Our pick for one of the best space sandbox games

Void Destroyer 2 is a unique RTS sci-fi game that involves space combat and requires intergalactic tactical prowess. You begin the game with a bare-bones spaceship and little else to your name. Journey your way through space while exploring planets and taking down enemy ships, building your wealth and making a name for yourself along the way. As you progress, upgrade your ship with new chassis, engines, and weapons. But be wary! The solar system can be a dangerous place, and only the strongest will survive.

Our pick for one of the best 2D sandbox games

If you haven’t heard of Terraria, chances are you’ve been living under a rock. Which, ironically enough, is exactly the kind of excitement that Terraria offers! Journey your way through procedurally generated worlds, mining resources and constructing items and shelters along the way. Terraria features a full-fledged crafting system, fort-building mechanics, and endless exploration. You’re free to fight enemy monsters and befriend NPCs, or open multiplayer mode and explore the map with your friends.

Our pick for one of the best sandbox games Xbox

Your mission? Colonize the procedurally generated solar system one planet at a time. Astroneer is a sandbox exploration game with no clear objectives or linear storyline, yet it offers some of the most immersive gameplay imaginable. Take control of an astronaut and navigate an assortment of planets on foot or via spacecraft. The game features resource collection and crafting systems, as well as a number of groundbreaking game mechanics like terraforming and oxygen generation. Astroneer was released in early 2019 and is available on Windows and Xbox One.

Our pick for one of the best sandbox games ever

It’s widely regarded as one of the best sandbox games of all time, and it’s inspired numerous games, including several on our list. Yes, it’s Minecraft, the game that’s centered exploration, resource collection, and crafting. Players are dropped into an open world where they’re free to roam the procedurally generated maps and build skyscraper structures or dig deep underground. There are endless activities to engage in, and Minecraft boasts a bustling community of both hardcore modders and casual gamers. Ready to let your imagination run wild? Check out Minecraft on all your favorite platforms.

What are Sandbox Games?

A sandbox game is a type of video game that features open world maps and, quite frequently, creative crafting and building systems. Gameplay consists of non-linear objectives, which allows the player to explore and complete tasks as they choose. Sandbox games often make use of resource collection and crafting mechanics, and this sets them apart from the best open world games.

The first major sandbox title arrived on the scene in 1984 with the release of Elite. It featured an open-world environment that allowed players to roam through space as they pleased, as well as innovative concepts like resource mining. Following the success of Elite and other hit titles throughout the ’80s and ’90s, the early 2000s saw games like GTA and Garry’s Mod arrive on the scene. This ushered in a new era of massive 3D open-world environments and games that gave players complete control over the game world itself.

Minecraft hit the market just a few years later, and its incredible success inspired a new wave of sandbox games that featured epic crafting systems, procedural generation, and more. The current outlook? The sandbox genre is running at full capacity, and it remains an incredibly popular formula among indie and major game developers.

Our research on sandbox games highlighted many of the unique characteristics in the genre, and we’ve penned some general thoughts on the subject for a comprehensive look.

Not only is creativity encouraged, but it’s also absolutely necessary. Sandbox games are about choosing your own destiny and creating a world inspired by your own imagination. There are few rules, and whatever you dream up is fair game.

2. Forging your own path can be difficult.

While it might seem counter-intuitive, making all the decisions for yourself can be more challenging than linear storylines, as analysis paralysis sets in. Moreover, sandbox games often entail trial-and-error rather than direct instruction.

3. Large maps are the norm.

Given that exploration is one of the primary mechanics in sandbox games, developers generally utilize large maps (and even procedural generation) to create an immersive world full of activity and adventure.

4. You can always specialize in one or two skills.

While there is always a lot to do and explore, you are free to choose one or two skills to excel in. Many sandbox games even encourage this by introducing mechanics like trading systems that allow you to bypass certain activities altogether.

5. Crafting and building are akin to constructing a sandcastle.

Corny as it may be, the best sandbox games take us back to our youth and instill that same sense of wonder and awe. The world is your oyster, and your journey is just getting started.

Be sure to check out our other game roundups for even more exploration and adventure titles: