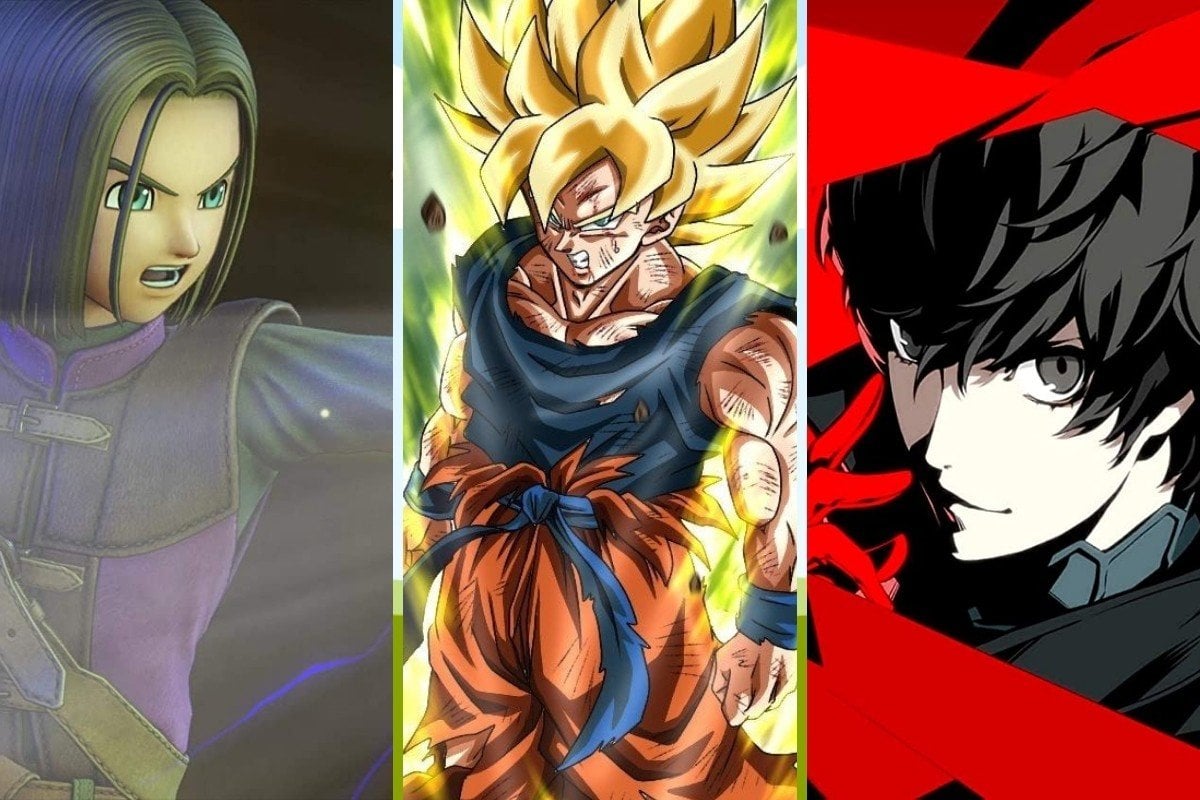 Today we’ll be discussing the best anime games for PS4. If you enjoy Japanese animation and immersive role-playing titles, you’ve got to check it out!

Japanese anime is one of the most popular animation styles in the world. Everything from Astro Boy to Demon Slayer has captivated eastern and western audiences alike. From your favorite manga pages to the latest Disney-produced Miyazaki film, there’s something for everyone to enjoy.

But we’re not here to talk cartoons and comics — we’re a gaming publication.

The anime art style isn’t limited to the pages of manga or a Crunchy Roll subscription. There’s a whole sub-genre of anime-inspired video games just waiting to be played.

It’s hard to quantify exactly what constitutes an “anime game.” There isn’t always a clear line when attempting to differentiate between different art styles. For this list, we won’t be including games whose art style seems to aim for realism (e.g., Final Fantasy, NieR: Automata). Games based on popular anime series and original games that utilize the anime art style will be included. Basically, if it looks like anime, we count it.

Starting with our least favorite, here’s the comprehensive list of best anime games for PS4.

The best art style in an anime game for PS4

One of the most exciting things about the first Ni No Kuni game was that Level-5 partnered with the legendary Studio Ghibli for its design and a good deal of its animation. Ni No Kuni II doesn’t have any further involvement with Studio Ghibli, but the art style remains true to the original while still taking advantage of the PS4’s expanded graphic capabilities.

You play as Roland, a man who finds himself in the middle of a coup d’état after being drawn into the “other world.” He must protect the young usurped king and help him rebuild his kingdom.

The gameplay is good, but the real appeal is in the art style. It retains much of its predecessor’s Ghibli-charm and keeps us coming back for more.

For most of its run, Naruto was the second-bestselling Shonen manga after One Piece. An anime and series of fighting games spawned from that popularity, which managed to accrue a pretty decent-sized following for itself. Even now that the last episode has aired, people are still keeping those characters alive.

Naruto Shippuden: Ultimate Ninja Storm 4 follows Naruto and his former teammate Sasuke as they battle their way through the Fourth Shinobi World War. It has all of your favorite characters from that world, each boasting the signature techniques you remember from the show.

The game’s Road to Boruto expansion allows you to play through several story beats from the Boruto spin-off series as a handful of its new characters.

Not only is it styled after Masashi Kishimoto’s original art, but the combat is nothing to sniff at either.

Catherine is one of the more cerebral games to come out of Atlus Studios, and between you and me, that’s saying something.

You play as Vincent, a middle-class salaryman who starts having surreal nightmares after meeting a beautiful woman named Catherine (not to be confused with his longtime girlfriend, Katherine). The story explores the psychological effects of guilt and lust.

Most of the gameplay revolves around puzzles as Vincent struggles to climb deadly towers of blocks. There are still elements of Atlus Studios’ famous social simulation, including a bar where you and your friends can meet after work. The decisions you make in these group gatherings affect the end of the game.

Danganronpa’s place on this list might throw a few of you for a loop. Does an occult-indie title really deserve such a high ranking on a list of the best PS4 anime games?

Yes, and here’s why.

The Danganronpa series is known for over-the-top mysteries, ludicrously convoluted plotlines, and a unique art style. Although Killing Harmony doesn’t do much that the first two installments didn’t do first, it still does them better than any other game on the market.

You play a student trapped inside Hope’s Peak Academy, a high school designed for the “ultimate students.” You’re considered one of the best that Japan has to offer, but everything goes wrong when you and your classmates are trapped in a murder game. The only way to survive is by solving your classmates’ murders.

It’s campy, it’s stylish, it’s fun, and it contains some seriously dark overtones. It’s probably the most “anime” game on this list.

The Tales series has been progressively gaining popularity for a while now, culminating in its newest installation, Tales of Berseria.

At first glance, this game is a jaunty pirate adventure. You set out to explore the islands dotting the Holy Midland Empire’s seas, accompanied by a crew of pirates with unique designs and abilities. Your character, however, is on a quest for revenge. The story’s central pillar revolves around Velvet learning to cope with her trauma, a process made easier by the lighter tone of the crew’s interpersonal stories.

Tales of Berseria is a classic JRPG with a cool anime style and many interesting places to travel, fight, and grow.

Ever hear of a little Shonen anime called Dragon Ball? Arc System Works certainly has, and they decided to use it to throw together the best anime fighting game of this generation.

Dragon Ball FighterZ manages to blend a deep catalog of beloved Dragon Ball characters with high-octane visuals and a three-person team fighting system that is second-to-none.

The story mode is pretty fun too!

The game is set shortly after the Universe 6 arc of Dragon Ball Super. Android 21 repairs Android 16 and uses the power of the dragon balls to resurrect some of Goku’s most legendary enemies. Now, these characters must fight for the fate of the world.

The best anime JRPG for PS4

All of the characters have original designs made by the legendary manga artist Akira Toriyama, the man responsible for Dragon Ball. You have to admit that gives this game some serious otaku cred.

You play the reincarnation of a legendary warrior known as the Luminary. Together with a cast of lovable characters, you embark on a thrilling adventure across Erdrea.

Dragon Quest XI is a fantastic JRPG and a wonderful place for new players to break into the Dragon Quest series.

Code Vein has been touted as “anime Dark Souls” by fans and critics alike, and it’s easy to see why. There are souls to collect, giant monsters to fight, long attack animations, and a heavy criterion for dodging enemy blows. Fans of the Souls games will find a lot to love about Code Vein, but I think relying too heavily on that comparison does a disservice to all the ways Code Vein distinguishes itself.

The story is set in a post-apocalyptic future where monsters are being raised by vampire-like creatures called Revenants. You can team up with an AI-controlled ally or a friend via co-op multiplayer to explore the world, uncovering the mystery of your own missing memory.

The dramatic character designs are really fun, but the styling isn’t the only anime thing about it. The angsty, melodramatic narrative is about as anime as stories get. It adds an element of silly fun to a genre typically defined by bleak, gray-toned worlds.

Persona 5 takes the number one spot on our best anime games for the PS4. This shouldn’t come as a surprise to anyone who’s read our Persona games ranked list or our best JRPGs for the PS4 list, as this game was number one on both of them as well.

You play Joker, a recent transfer to a high school in Tokyo. You explore the city, make new friends, and eventually discover the city of the collective unconscious, Mementos. Together, you must battle the “shadows” that reside there, stealing the hearts of corrupted adults.

Persona 5 has everything you could want in a JRPG — monster collection, turn-based combat, social simulation, and a colorful cast of side characters to share the world with. It’s like Atlus looked at every other successful JRPG, plucked their best mechanics, and then rolled them all together until they were perfectly balanced.

That isn’t why it’s number one on this list, though.

Persona 5 takes the top spot here because it has style. Everything from the pop-noir, red and black color palette to the modern-jazz soundtrack screams “cool.” The character designs are all top-notch, playing into the theme of their Mementos costumes representing who they truly are under the masks (or personas) they wear in human society.

It isn’t just an innovative game; it’s a unique evolution of the anime style.

We hope you enjoyed our list of the best anime games for PS4. We can’t wait to see what new anime-inspired wonders the PS5 has in store.