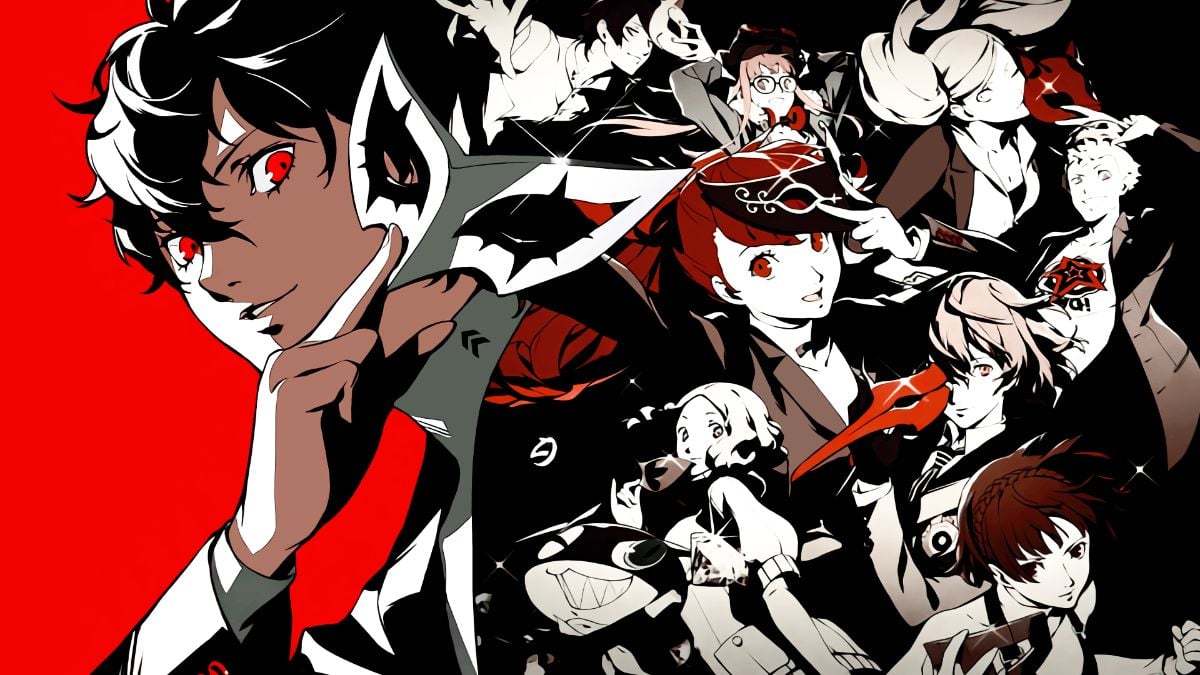 Persona is relatively unique in the world of video games. It started as a spinoff of Atlus’s Magami Tensei series, but has since grown to become more popular than its parent franchise in terms of mainstream success. Even though it’s never fully rivaled Final Fantasy or Dragon Quest, the series has grown in popularity with each new game they’ve released ever since Revelations: Persona arrived on the PlayStation back in 1996. We’re big fans of Atlus here, so we decided to put together a list of Persona games ranked worst to best!

Persona has some interesting dynamics that set it apart from other JRPGs. If you’re checking out the series for the first time, it might help to know what you’re getting into. Like Final Fantasy, each Persona game is set in its own world with its own cast of characters and its own set of rules. There are a few constants that make up the Persona formula, though — the main characters are high school students, the protagonist is silent, combat revolves around the use of Personas (guardian spirits who fight on your behalf), and the themes are related to religion, myth, and the human psyche.

Don’t know where to start? Don’t worry. Our best Persona games ranked list will help you separate the wheat from the pseudo-psychological chaff.

Technically, a list of all Persona games ranked would include a couple of 3DS chibi-style games, a browser game, two fighting games, and a set of rhythm-based dance games. We don’t feel that these games really represent the series, even if they do carry the Persona name. For our purposes, this list will only contain numbered installations in the series.

Also, this list will only feature the most up-to-date versions of each game. So, you won’t see both Persona 5 and Persona 5: Royal since Royal has everything the base game has to offer and more.

Without further ado, here’s our list of Persona games ranked worst to best!

Revelations: Persona, or Shin Megami Tensei: Persona, kicks off when several high school students gain the ability to control different aspects of their personalities, or Personas, after playing a fortune-telling game. Under the guidance of their guardian spirit, Philemon, these kids use their Personas to save the world.

This game had some pretty revolutionary mechanics when it came out, even if it is the lowest-ranked Persona game on our list. You could negotiate with your enemies mid-combat, allowing you to win some battles with words rather than fists. This would eventually go on to be a staple of the series.

Unfortunately, it suffered from an awful Western localization, and the innovations it offered didn’t push enough boundaries to rank it above any of the other games on this list. The only people who should play Revelations: Persona now are those dedicated to playing through the entire series.

Persona 2: Innocent Sin was made for the PlayStation back in 1999, but it didn’t get a Western localization until it was ported to the PSP in 2011. The game adds a bit of complexity to the established system and takes the story down a much darker path. Set in Sumaru City, the game follows Tatsuya Suou and his classmates from Seven Sisters High School as they use their Personas to fight against the Joker. The Joker is a sinister madman who’s started warping reality by spreading rumors that keep coming true.

Innocent Sin builds on the combat from the first game and adds the “rumor system,” allowing your player characters to spread rumors heard from NPCs if they find those rumors beneficial.

Wait a minute! We already did Persona 2, didn’t we? Well, there are actually two of them. Sales for Innocent Sin weren’t as high as Atlus had anticipated, so they scrambled to recoup their losses by expanding on the story with a sequel. Persona 2: Eternal Punishment is technically the third game in the series, acting as part two of the Persona 2 duology.

Eternal Punishment takes place a few months after the events of Innocent Sin. It’s still set in Sumaru City, but it now follows the story of a reporter named Maya Amano. As in all Persona games, she and a group of friends gain access to their Personas, using them to battle the forces of evil and solve the mystery of the “Joker Curse.”

Eternal Punishment might have been hastily thrown together to regain the lost sales from Innocence Lost, but it’s a unique game that fully stands on its own. It even surpasses the game it was made to save. Eternal Punishment improves on the music, combat, and the rumor system from the original, and the story is among the darkest in the series. This is the one to get if you’re most interested in the cerebral-horror aspect of the series.

Persona 5 Strikers is the only game on this list that wasn’t developed by Atlus. It was primarily made by Omega Force, the studio behind Dynasty Warriors. The game just came to the west in February 2021, even though it was released in Japan a year prior. This isn’t Omega’s first time building in the world of a famous IP — they’re also the team behind the Legend of Zelda spin-off, Hyrule Warriors. Strikers is more than just a spin-off, though.

Strikers takes place four months after the events of Persona 5. It follows Joker and the rest of the Phantom thieves as they decide to spend their summer vacation on a camping trip together. Their preparations are interrupted when an idol named Alice Hiiragi gives them a card with a codeword which, when entered into a popular app, abducts them into a parallel Tokyo similar to the dream world they’ve battled their way through before.

There are a few missing features, such as the confidant system, and the combat is a little more Kingdom Hearts than classic Persona, but it still has that classic Atlus feel to it even if they weren’t the ones behind the wheel this time. Fans of the series will still find plenty to love in Strikers.

Until recently, Persona 4: Golden was the golden standard for what a Persona game could be. It polished all the best aspects of its predecessors to a mirror shine. The base game was released on the PS2 in 2008, with Golden serving as the game’s port to the PS Vita in 2012 and PC in 2020.

Persona 4 was inspired by several mystery novels, giving it more of a noir vibe than past games. It also broke from the traditional urban setting, placing its characters in a metropolitan town called Inaba, near Mt. Fuji. The story follows Yu Narukami and friends as they use their Personas to investigate a magical “TV World.” They discover a connection between the creatures that live there, called “Shadows,” and a string of murders occurring in the town. Only by uncovering the relationship between the two can they stop the tragedies from happening.

Don’t let the grisly murders fool you — Persona 4 is the brightest and most vibrant game in the series, both aesthetically and tonally. Do you like goofy anime tropes with pop-inspired character design? If so, Persona 4 is probably the game for you.

It recently became available on Steam, making it the first and only Persona game to make its way to modern PC gaming. Rumor has it that Atlus was shocked by how well it performed there, so fingers crossed that they have more ports on the way!

There’s a reason nothing below Persona 3 made it this high on the list. Persona 3 revolutionized the series when it added a social simulation component to the game. The ability to talk to your comrades outside of battle allows you to become invested in them as characters and not just tools for you to manipulate to beat the game. Persona isn’t the only series to do this — Fire Emblem is famous for its character interactions, but adding a pinch of social interaction was precisely what the Persona formula needed to bring the series out of the obscure JRPG shadows and into the limelight.

The story is excellent, as well. The player-named protagonist joins a group of his peers called the Specialized Extracurricular Execution Squad (or SEES). Their mission? To investigate the “Dark Hour,” a mystical period of time that most people don’t know exists. Here, they use their Personas to battle the mind-eating Shadows. Persona 3 FES added over thirty hours of gameplay, including an epilogue called “The Answer,” which ties up many loose ends and makes for a more complete version of the story.

Some people might question our decision to rank Persona 3 over Persona 4, since Golden offers many of the same mechanics in a more polished package. That’s a fair point, but we’d argue that Persona 3 is the game that set the tone for the rest of the series. It was the first Persona game to be a major success in the West, and its use of the calendar-based time system, its introduction of social links, and its general aesthetic went on to define both games that came after. It’s a great story that’s held up to the test of time.

There’s nothing worse than when a new game doesn’t live up to a series. Luckily, that isn’t an issue for Persona 5. This game got a perfect 10/10 from IGN, and (more importantly) earned the top spot on our list of the best JRPGs for the PS4. The base game was initially released in 2016 for both the PS3 and PS4, with Royal following as a PS4 exclusive.

The story takes place in Tokyo as our nameless protagonist (who later takes the moniker “Joker” — sound familiar?) and a group of friends explore Mementos, the city of the collective unconscious. Together they “steal the hearts” of corrupt adults, forcing them to take responsibility for their selfish behavior.

Persona 5 returns to the more cerebral storytelling of early Persona games, but without the overly self-serious tone. The character interactions are some of the best in the series, and the combat has never been better. They nailed the series anime-pop-horror-noir aesthetic, pairing it with an amazing jazz-centric soundtrack and some of the most stylish animation in the genre.

Royal’s release brings new characters, more areas to explore, and a new semester at Shujin Academy. Overall, it’s the culmination of many of Persona’s most innovative features. Atlus has truly outdone themselves — Persona 5 is not an act I would want to follow, and I pity the team that has to make Persona 6.

We hope our Persona games ranked list has given you a more in-depth look at the Persona series. If you enjoyed this article, please let us know in the comments and subscribe to our email list for more.