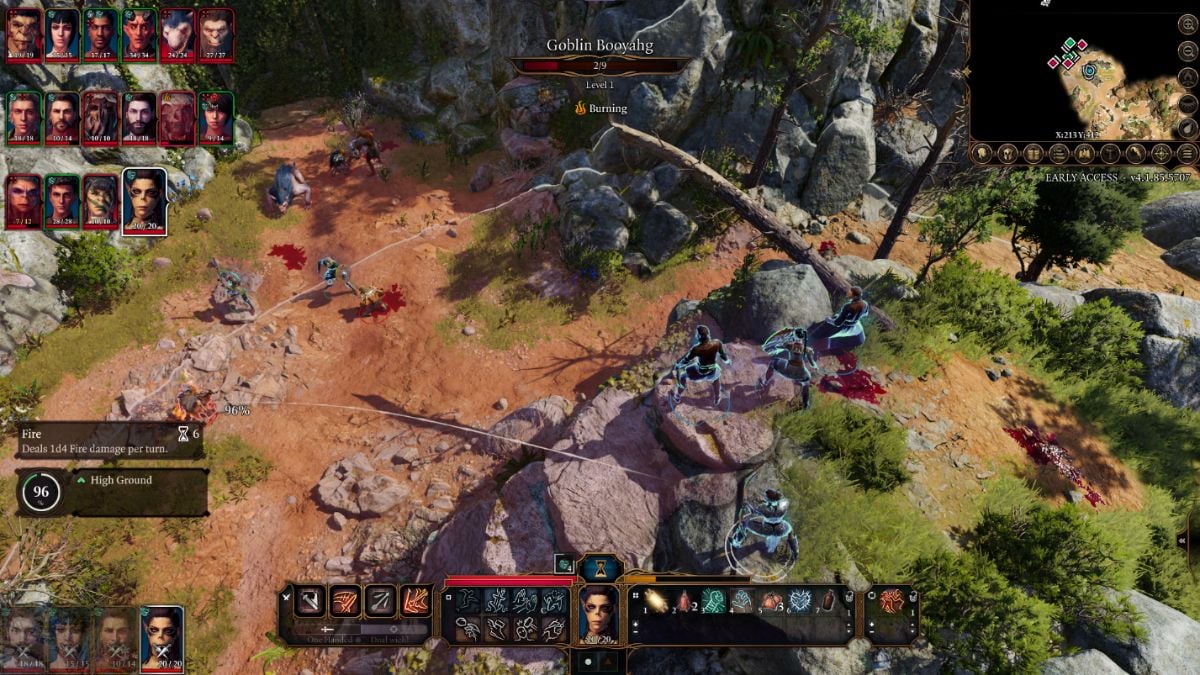 The travelers were under attack. Goblins had beset them only scant meters from safety, and they fought tooth and nail to keep the nasty things from looting their soon-to-be corpses.

Drawn by the sounds of battle, a party of wayward adventurers — a half-Drow Ranger, a Githyanki Warrior, a Human Wizard, and a half-Eladrin Cleric, to be precise — crest a hill from which they have the perfect vantage point on the chaos below.

In any other game, the choice would be clear: save the travelers and move to the next linear story beat. In Baldur’s Gate III, things aren’t always so clear-cut.

Our adventurers had just barely survived an encounter with looters and thieves outside some overgrown, moss-covered ruins. Each battle is appropriately a matter of life and death. Luck was on their side last time, but there were no such guarantees here — the sheer number of goblins, not to mention the warg, threatened to overwhelm them. Should they brave the fight anyway, or leave the travelers to their fate?

There is no “right” answer in Baldur’s Gate III. Any and all of them present a path forward, often with implications for future story beats or potential rewards/threats down the line.

Although they were frozen in time waiting for me to take action, I like to imagine my half-elf Drow and the wizard sharing a look — a slight narrowing of the eyes, a confident smirk. The Drow nocked an arrow, the wizard readied a spell, the Githyanki coiled like a spring ready to leap into the fray, and the Cleric shimmered with golden light as she uttered the first words of a healing spell.

The travelers would not fall this day. Or, if their path were truly destined to end here, they wouldn’t fall alone.

This is Baldur’s Gate III. And even in early access, it’s as thrilling as a trip through one of the Nine Hells.

Minor spoilers may follow, but likely nothing you wouldn’t know from following the game’s development.

From the first moment you spend with the character creator, it’s evident that Larian Studios is sticking to the roots of Baldur’s Gate. You’ll be able to play as one of the “origin characters” later on, but Larian knows they have a lot to prove by ensuring that every interaction, quest, and story beat is just as enjoyable for a custom-rolled character. I have to imagine that’s a large part of why they started early access with custom characters — they want you to know that you can expect a quality experience no matter which character you choose.

Because, like all good Dungeons & Dragons campaigns, this is your story — the story of how you found yourself on an Illithid nautiloid over the Sword Coast with a tadpole in your brain. The tadpole serves to drive the story (at least through the first Act available in EA), a ticking time bomb that threatens to turn you into a tentacled monstrosity as soon as the clock reaches zero. It’s a problem shared by all of the characters who come to join your party. Much like a table full of players, it’s hard to get the characters to agree on how exactly you should go about finding a solution.

The translation of the tabletop realm to PC has long been the calling card of the Baldur’s Gate series. Veteran CRPG developer Larian Studios carries the standard here with aplomb. Sure, there are a few missteps — shoving is such a common and easy solution that if you can make it through every battle in Act 1 without shoving some hapless mook to their deaths, I’d go so far as to call that “hard mode.” Still, by and large, it does a remarkable job of making you think like a Dungeons & Dragons player, right down to the skill checks.

Baldur’s Gate III is absolutely littered with skill checks, even in Early Access. Want to play a character who’s all sneak and charm with very little combat ability? You sure can. It will be hard, granted, but you can let your other party members handle battles while you breeze past every Persuasion and Insight check. Some non-combat checks even advance the story, much to my delight.

Passive checks in particular may seem like something that wouldn’t translate well to a video game, but Baldur’s Gate III pulls them off without a hitch. Entering a room and seeing everyone in your party fail a passive skill check delivers the same sense of foreboding as watching your DM roll some dice behind their screen, purse their lips, then look back up at the table without a word. It’s horrifying. I love it.

Back to the combat, though — does the number-based combat of 5e work in this setting? Absolutely. It’s just as brutal as its tabletop version because, at the end of the day, statistics and probability don’t change. You’ll still whiff 90%+ attack rolls, and you’ll sometimes nail desperate, last-chance 20% saves. That’s what makes the game so exciting and gives it so much potential to build a wild and sprawling narrative — it isn’t so much that you never fail, but that you have so many different ways to respond to your failures and define your heroic legacy.

Whether by sword or spoken word, you’ll notch up victories across the Sword Coast as you hunt for the solution to your tadpole problem. And you’ll have plenty of opportunities to bond — for better or worse — with your fellow party members along the way.

You Got Your Mass Effect in My Tabletop Game

Getting to know the characters is one of the highlights of my time spent with Baldur’s Gate III thus far. The moments between bouts of combat allow you to speak to your companions, finding out what makes them tick, getting their thoughts on your leadership, and triggering a few sidequests when you sufficiently earn their trust.

The interactions with your party are rock solid, well-written, and effective at digging up memories of campaigns past with your D&D group. While you might not like every quirk of their personalities, they’re all unique and interesting and promise many rich and varied adventures to come on the full game’s release.

Baldur’s Gate III is shaping up to be everything a Dungeons & Dragons player and DM like myself would hope for in a PC retelling of the classic experience. There’s even multiplayer on the horizon, owing to Larian’s experience making the Divinity: Original Sin series.

As an added note, fans of the earlier games should expect some changes — as I mentioned before, Baldur’s Gate III is based on Fifth Edition. Quite a bit has changed since the last installments hit PCs in ’98 and ’00.

Still, some things never change… like failing a passive Perception check and slowly backing out of the room.