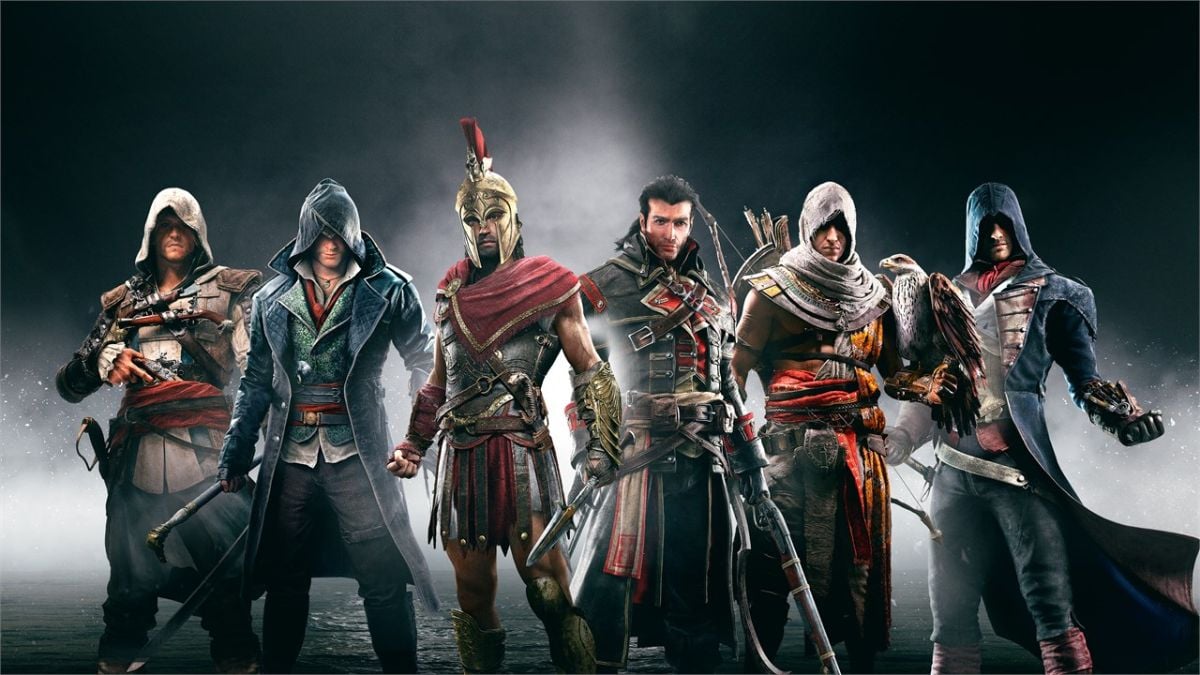 We all remember our first leap of faith — that long plummet from a tower only to land safely in an illogically small cart of hay. Laying your hands on an Assassin’s Creed game is a unique experience. Sure, Prince of Persia pioneered the parkour action game, but there is a unique signature to Ubisoft’s flagship series that you won’t find anywhere else. What other series combines an open-world sandbox design with detailed historical settings, innovative combat mechanics, and memorable stories?

Assassin’s Creed Valhalla is slated to come out this November, and it’s one of the most anticipated games of the year. Players everywhere are rubbing their palms together in anticipation of the new Viking-themed adventure. With that in mind, we thought now would be an excellent time to take a look at the best Assassin’s Creed games ranked!

As a quick disclaimer, this list will only be including main-series console and PC titles. The Assassin’s Creed name has been used on over a dozen handheld and mobile games that aren’t considered canon to the main story. We’re also leaving out the Assassin’s Creed Chronicles games, as they are much simpler and don’t utilize the same playstyle as the rest of the series.

You’ve waited in the shadows long enough. Without further ado, here’s our list of all Assassin’s Creed games ranked!

Assassin’s Creed Unity is set in the French revolution. You play the Assassin Arno Victor Dorian during the events leading up to the execution of King Louis XVI.

Unity is ranked lowest on our list, but that doesn’t mean it’s a bad game. There’s still plenty to love about the setting and the story that unfolds. It had a lot of bugs at launch, however, and while the mechanics were perfectly adequate, there simply wasn’t enough innovation to separate Unity from its predecessors.

The feud between the Assassins and Templars has been going on for centuries by the time Assassin’s Creed Rogue takes place, but this is the first time players have been able to see the battle from the other side. Rogue is set during the Seven Years’ War. You play as Shay Patrick Cormack, a former Assassin who traded sides and now begins hunting his former brothers.

The game gets points for its unique perspective, but it offers very little mechanically that wasn’t available in Black Flag. It was also the last Assassin’s Creed game available on the PS3/Xbox 360 generation of consoles, making it easy to overlook with new technology on the horizon. It was later remastered for modern consoles, but high-resolution textures and improved shadows and lighting weren’t enough to generate excitement for what felt like “just another Assassin’s Creed game.”

Assassin’s Creed III: Liberation was initially released on the PS Vita. It follows the series’ first female protagonist, Aveline de Gradpre, as she attempts to thwart the Templars in their bid to take control of New Orleans at the end of the French and Indian War.

Aveline is a great character, and this was the first Assassin’s Creed game to come to a portable console that actually felt like part of the main series. The mechanics functioned similarly to Assassin’s Creed III, though it took advantage of the Vita’s rear touchpad, cameras, and gyroscope. Despite being a great game, it was somewhat limited by the capabilities of a handheld device.

Just last year, however, Liberation got a complete makeover for the modern generation of consoles. It now runs on a completely new graphics engine with new character models and revamped mechanics.

Assassin’s Creed Syndicate follows Jacob and Evie Frye. Our protagonists utilize the organized crime syndicates of Victorian-era London in an effort to rid the city of Templar control.

Syndicate is a hard one to place on this list. It’s the most advanced version of Ubisoft’s approach to Assassin’s Creed games (up until they changed the formula with Origins, anyway), but “most advanced” doesn’t always mean “better.” There were so many features in Syndicate that the game ended up feeling a little bogged down.

It’s a shame, really, because hopping carriages and building up a criminal underworld is pretty fun. Playing as the twins is a unique and memorable experience, and adventuring through London at the height of the Industrial Revolution makes for striking visuals and a whole new dimension to gameplay.

Here it is, folks — the game that started it all. Assassin’s Creed was one of the first games that really showed off the capabilities of seventh-generation consoles.

The game follows Altair Ibn-La’Ahad, an Assassin tasked with removing several prominent Templars during the Third Crusade. It’s also the game that introduced Desmond and the mystery of Abstergo.

The game played like a dream upon release, and the controls stand up to the test of time. The only trouble with this game is that it’s relatively empty — there’s not much for Altair to do outside of the main storyline except hunt down a few collectibles.

I’m a sucker for that light-washed aesthetic, though. And it’s secured a respectable spot on our list of Assassin’s Creed games ranked.

Assassin’s Creed: Revelations marks the final installment in the Ezio trilogy, and it’s a personal favorite of mine. It was originally released for the PC, PS3, and Xbox 360, but was later remastered as part of the Ezio Trilogy for the PS4 and Xbox One alongside Assassins Creed II and Assassin’s Creed: Brotherhood.

It’s set in 16th-century Constantinople (not Istanbul) at the height of the Byzantine Empire. Ezio must attempt to unlock Altair’s secret vault to obtain his memories, allowing players to go back in time and control the original master Assassin once again.

It’s cool to see Altair again, but the real appeal lies in the satisfying conclusion to Ezio’s story. As the longest Assassin story arc in the series, it’s well-deserving of a good ending, and Revelations certainly delivers on that front.

Unfortunately, other elements of the game and its story are pretty lacking. The hook blade is an interesting addition that makes travel more fun, but Ubisoft’s version of Constantinople fails to stand out as much as other locales in the series. Throw in less-interesting antagonists and a ton of fetch quests in the main storyline, and it makes sense why Revelations doesn’t live up to other titles in the series.

Assassin’s Creed III takes us back to the American Revolution. You play as Ratonhnhaké:ton (or Connor) as he supports the colonies in their bid for independence while simultaneously seeking revenge against the Templar who attacked his tribe and killed his mother.

Connor is a great character to play, and the story is one of the best in the series. It’d rank a lot higher on our list if it weren’t for the architectural pitfalls of its setting. 18th-century New England doesn’t offer the same density of tall, historic buildings that other locales in the series do, meaning that the signature parkour-style gameplay is far more grounded than players are used to.

The game was remastered in 2019, and was released for both the Switch and as an add-on to Assassin’s Creed Odyssey for PC, PS4, and Xbox One.

Assassins are cool and all, but do you know what’s even cooler? Pirate-Assassins!

One of the biggest things that set Black Flag apart is the seafaring aspect. Ship-based exploration replaces a majority of the travel, giving players a sense of discovery that wasn’t present in any of the Assassin’s Creed games that came before it.

Sailing across the West Indies, listening to your crew sing sea shanties and fighting for freedom from British and Spanish tyranny? Aye, maties. It’s the pirate’s life for me!

Assassin’s Creed II follows the enigmatic young Ezio Auditore de Firenze as he goes on a quest for vengeance against those responsible for his father’s death. The game is set in Renaissance Italy, featuring Venice, Florence, Monteriggioni, Forli, San Gimignano, The Vatican, and Tuscan.

People loved the first Assassin’s Creed game conceptually, but we always knew that it had room for improvement. Not only does Assassin’s Creed II have a much more charismatic protagonist, but it also boasts marked improvements over the first game in nearly every way. The combat system is more complex, we receive cameos from historical lions like Leonardo da Vinci!), the world as a whole is fuller and livelier, and Ezio can swim!

It’s certainly not the most intricate game in the series, but it was the first to show us how vibrant and fun Assassin’s Creed could be.

Assassin’s Creed Origins marked a dramatic turn in the series. Since its inception, Ubisoft has been cranking out one to two Assassin’s Creed games a year. Many fans felt as though the games were becoming formulaic and stale, but Origins changed that.

The game is set in Ancient Egypt and chronicles the inception of the Assassins. Bayek and his wife Aya fight to protect the Ptolemaic Kingdom from numerous threats, including civil war and a Roman invasion.

The setting isn’t the only major change Origins makes, though. The combat mechanics have been completely revamped in favor of a hit-box system, and eagle vision — the Assassin’s ability to detect nearby threats — has been replaced with an actual eagle.

Many players who’d slept on the last few Assassin’s Creed titles were drawn back into the fold by Origins.

Assassin’s Creed Odyssey is the most recent game in the series, and takes place during the Peloponnesian War back in 431-422 B.C. Players choose to control either Alexios or Kassandra, sibling mercenaries that fight for both Athens and Sparta in the conflict.

With the most recent installments making steady changes to the Assassin’s Creed formula, we’re eager to see what Ubisoft has in store for Valhalla.

Coming in at number one on our list of Assassin’s Creed games ranked is Assassin’s Creed: Brotherhood. It’s only the third game in the series, but it’s one of the most memorable games Ubisoft has ever made. A slightly older and more skilled Ezio returns to finish what he started, namely, ending the reign of the Borgias.

The game is set in Renaissance Rome, which is one of the best cities to navigate in the series. Handling Ezio is a bit more interesting than in Assassin’s Creed II, and the game also introduces the ability to recruit Assassins to work under you. This allows players to organize coordinated attacks, which are always thrilling to pull off.

On top of all that, it has one of the best-written stories that culminates in a one-on-one battle with the Pope in the heart of The Vatican.