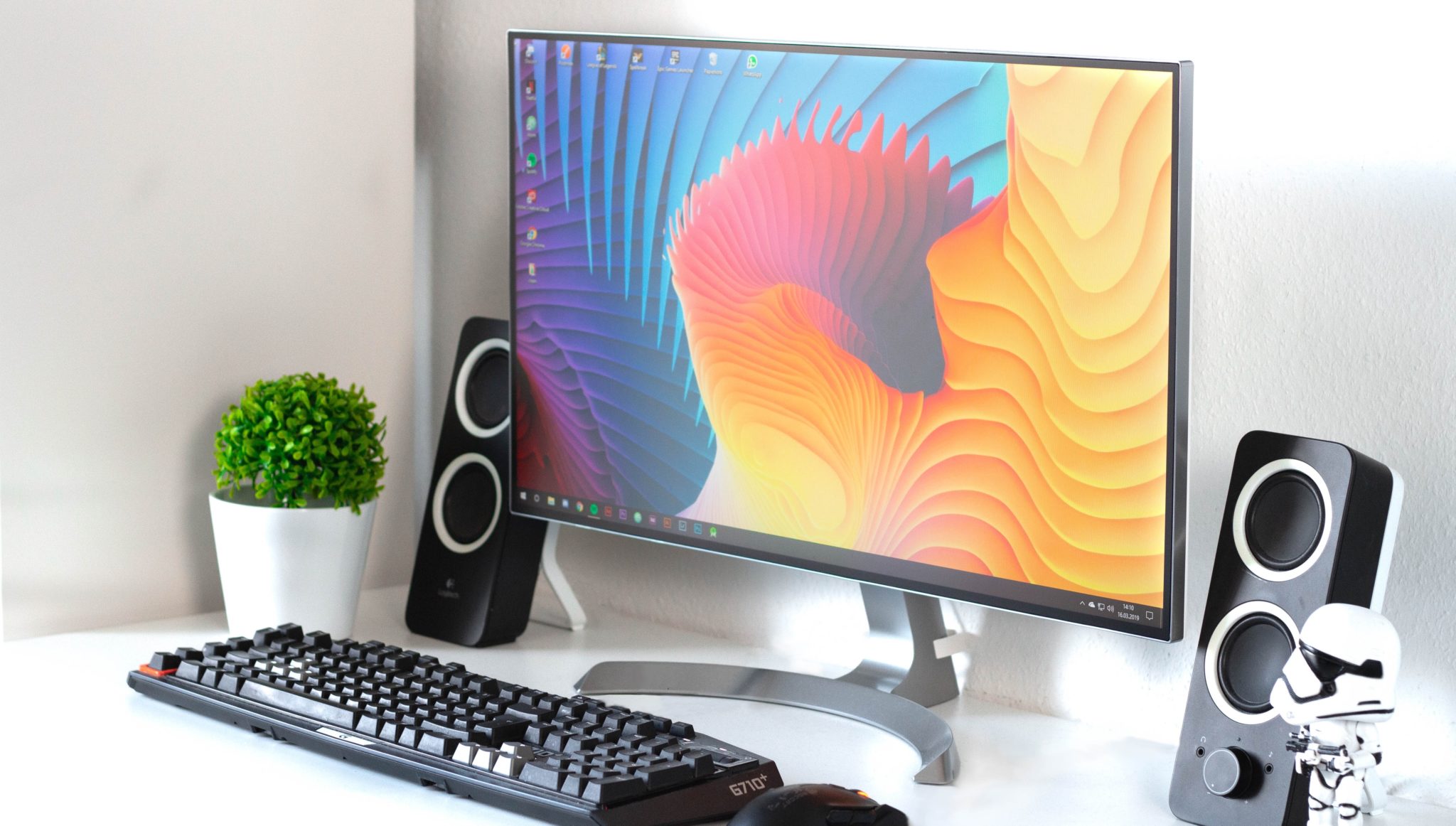 It’s the dawn of a new decade, and OLED monitors are nearly ready for prime-time. Are they as powerful as everyone claims? Let’s put it this way: the best OLED monitors oughta be banned from gaming. These displays present images so clear and detailed, the competitive advantage is unreal. We’re talking 4K resolutions, sky-high refresh rates, and response times well under a millisecond.

Fortunately, there are still a few kinks to work out with OLED technology. But early adopters are in luck. For gamers at the forefront of innovation, the best OLED monitors deliver cutting-edge performance that’ll leave your opponents in the dust.

This article takes you through the latest OLED monitor news. We’ll also peek at the most popular models and look behind-the-screens of this exciting (and overpowered) technology. What’s the future hold for OLED? Read on to find out.

Although OLED technology has been around since the 1950s, it wasn’t until a few years ago that OLED displays entered the mainstream lexicon. Indeed, there’s been a whirlwind of new stories and breakthroughs in the past year alone.

Let’s take a look at a few of the most notable news pieces:

Next, let’s have a closer look at the best OLED monitors currently available for purchase.

At 21.6 inches, the ASUS ProArt PQ22UC is a fairly small OLED display. But what it lacks in size, it more than makes up for in features.

What can you expect from the ASUS ProArt? For starters, it boasts insane specs like DCI-P3 coverage with 10-bit color depth, 4K resolution at 204 PPI, and a 0.1ms GTG response time that blows away everything else on the market.

Though the ProArt is mostly suited for design and editing (there’s no DisplayPort to access features like Adaptive Sync), it’s still a killer peripheral on the battlefield. Snag one today to experience next-level color, contrast, and graphics.

The best OLED monitor for gaming

It’s the gaming monitor we’ve all been waiting for. That’s right — the Alienware AW5520QF has finally arrived!

Experience the quality for yourself by connecting with Radeon Freesync or NVIDIA G-Sync, and watch as your name rockets to the top of the leaderboards. The Alienware AW5520QF is the best OLED for gaming, bar none.

The best OLED monitor for professionals

The first Sony Trimaster OLED monitor hit the shelves over 5 years ago, and there’s been a steady stream of models released every year since. Marketed as professional-grade displays, these monitors are genuinely top-tier. They’re geared primarily towards studio work and broadcasting, but nothing’s stopping everyday folks from grabbing one — except perhaps the (absolutely insane) prices.

The latest Sony Trimaster display, the BVM-E250, is among the best HD OLED monitors on the market. It features unrivaled color depth and accuracy courtesy of a custom micro-cavity structure with dedicated color filters, and boasts a broad I/O connectivity panel for all your devices. Despite its 1080p resolution cap, your eyes won’t believe what they see.

Interested? You can custom order the Sony BVM-E250 Trimaster Monitor on B&H for the low-low price of… $23,400.

These next monitors haven’t hit the shelves quite yet, but they’re all expected to make an appearance within the next few months.

Channel the predator and annihilate your enemies with the Acer Predator CG552K!

This powerful OLED monitor is part of Acer’s gaming line, meaning it’s well-equipped to handle the latest triple-a titles and hardware (looking at you, PS5 and XSX) with ease. It offers 4K resolution out of the box, as well as 98.5% DCI-P3 color coverage and a stunning 400 nits of brightness. It also comes with DisplayPort, HDMI, and USB-C ports, and provides access to Adaptive Sync and NVIDIA G-Sync at a 120Hz refresh rate. Oh, and did we mention the 0.5ms response time?

The Predator’s release date has been pushed back due to recent worldwide events, and it’s now expected to launch in mid-2021.

ViewSonic is a major player in the display game, but they’ve been hesitant to step into OLED products… until now.

The ELITE XG550 features nearly identical specs to the other 55-inch options on this list. This includes 4K resolution at a 120Hz refresh rate and a 0.5ms response time. What sets this unit apart is its extremely narrow bezel and bespoke RGB accents, which highlight its stunning imagery to dazzling effect.

There’s no word yet about Adaptive Sync or G-Sync. But if Viewsonic hopes to remain competitive, chances are they’ll find a way to incorporate these crucial gaming technologies.

There’s fine. And then there’s the LG UltraFine OLED Pro Monitor, AKA the 32EP950.

While we lack many of the specific details of the LG 32EP950 (it was only announced 2 months ago), initial impressions are… well, impressive.

This is LG’s first entry into the OLED market, and they’ve pulled out all the stops for every type of user. As such, the 32EP950 is packed with the latest connectivity I/O, including DisplayPort, HDMI, USB-3, and even built-in KVG switches for multipurpose use.

Like several other options on this list, the 32EP950 offers 99% DCI-P3 coverage and a 1000000:1 contrast ratio for vivid imagery. But LG didn’t stop there. The 32EP950 also supports Adobe RGB color coverage at 99% and Pixel Dimming HDR — making it ideal for professional design environments.

The LG UltraFine is an OLED monitor you’ll want to keep your eyes on.

A capable portable monitor is essential if you regularly travel for work, play, or competitive gaming tournaments. While there are many good options on the market, there’s been a notable lack of great options. The Xtend Touch Pro aims to change all that.

What’s so special about this monitor? First of all, it boasts a cutting-edge AMOLED display (AMOLED is a refined version of OLED technology) with 4K resolution. It also features 100% DCI-P3 coverage and a “one million to one” dynamic contrast ratio for stunning imagery — all built atop an easy-to-maneuver 15.6-inch screen.

There are a few nitpicks, however. First, the XtendTouch Pro can be hard to find, as preorders are currently sold out. It also lacks DisplayPort and standard HDMI ports. But that’s a small price to pay, honestly. Why? Because coming in at $1,300 MSRP, the XtendTouch Pro is the most affordable AMOLED display on the market.

In this final section, we’ll look at some out-of-stock OLED monitors that are discontinued and/or extremely difficult to find new. If one catches your eye, consider searching on secondary marketplaces like eBay.

The Ultrasharp UP3017Q was the first readily accessible OLED monitor to hit the shelves. When it released back in 2016, the gaming community couldn’t believe its eyes. Thirty inches of real estate, 2160p resolution, and 0.1ms response times? Unbelievable.

Though difficult (if not impossible) to find new, it’s a beast of a machine on the aftermarket. It’s also a cheap OLED monitor, all things considered. Simply hook it up to your rig via DisplayPort or HDMI, and you’ve got a stellar gaming display that’s guaranteed to destroy the competition. It’s one of the best OLED computer monitors around.

Gear up for greatness with the EIZO FORIS NOVA. This sleek display features a modern-industrial look that blends muted aluminum with cutting-edge technology.

As for the OLED screen? Washed-out colors and lack of contrast are a thing of the past. Enjoy true-to-life graphics that are perfect for gaming, watching videos, and more. Perhaps the best OLED monitor for 4K.

While this limited-edition display was initially capped at 500 units, rumor has it that a new batch is on the way!

The best OLED monitor for eSports

We’re honestly not sure what happened with this monitor. Things were looking up back in 2019, but the monitor has disappeared from public view in the year since. Is it still under production, or was manufacturing scrapped? We’re not sure.

What we do know is that initial reports estimate this monitor will have a 144hz refresh rate comparable to the best gaming monitors on the market. And if the other OLED displays are any indicator, you can likely expect response times well under 1ms. Top it off with 4K resolution and an exemplary 21.6-inch screen — and it may turn out to be the best OLED monitor for gaming (if it ever sees the light of day).

A Look Inside the Technology

What is an OLED monitor, exactly? An OLED monitor is a display that uses organic light-emitting diodes for better picture quality.

For starters, OLED monitors are self-illuminating. This means that each pixel within the display delivers its own illumination and on-screen image. That’s in stark contrast to standard LED displays, where the diodes act as a backlight that simply lights up an LCD (liquid crystal display) screen. With OLED, there’s no LCD required.

Moreover, OLED monitors use organic matter to produce light. Think about what that means. Have you ever heard that natural light is better than artificial light when it comes to picture quality? The same principles apply here.

OLED monitors are much more vibrant, and they offer higher-res colors and contrast – from a wide variety of viewing angles. Moreover, the best OLED monitors all feature 4K or better resolution.

Other key differences include size, energy efficiency, and price. Given the nature of OLED technology, they are much slimmer and smaller than traditional LED displays that need a bulky LCD attachment.

They are also far more energy-efficient than standard LED monitors. But, this all comes at a cost. As of 2021, OLED monitors are much more expensive than traditional LED monitors.

The Pros & Cons of OLED Monitors

Let’s take a look at the pros and cons of OLED technology:

OLED monitors are better in nearly every way. Their resolutions are higher, so pictures are clearer and brighter. Their color and graphics are more vibrant. And their contrast is second to none.

Even in the more technical areas, LED monitors are no match for color OLED displays. OLED monitors are slimmer and more energy-efficient. And in terms of responsiveness, the best OLED monitors boast input lag well below 1ms. That’s far better than comparable TN monitors.

Still, there are some downsides. Given their work in progress status, OLED monitors are still quite pricey. In addition, image retention (aka burn-in) can still be an issue. What is burn-in? This anomaly occurs when on-screen images leave a ghostly imprint on the display, even when it’s shut off. It’s an unfortunate byproduct of the increased brightness from organic light-emitting diodes.

Fortunately, the problem is dwindling as the technology evolves. It only happens in severe cases, and OLED manufacturers are well aware of the risks. As such, most of them offer extensive guarantees and/or warranties.

The primary question is: are these enhanced displays worth the cost?

Our opinion? A resounding yes! Although we currently only recommend them for early adopters, OLED monitors are the displays of the future. And they’ll provide you with a movie or gaming experience like no other.

What’s Next for OLED?

So, what’s next for OLED PC monitors? We’re happy to report that the future looks bright.

More and more companies are adopting OLED technology. This includes businesses in various industries, not just the technology sector. Some prominent companies have even promised to do away with outdated LEDs and LCDs completely!

Though the technology still has a ways to go, you can expect big things from OLED monitors. Hell, TVs have been using OLEDs for years. And though R&D for monitors is different than standard television sets, recent sales figures paint a promising picture.

Want to stay up to date on the latest happenings? Leave a comment down below and bookmark this page for future updates. Stay tuned for more exciting news on the best OLED monitors!