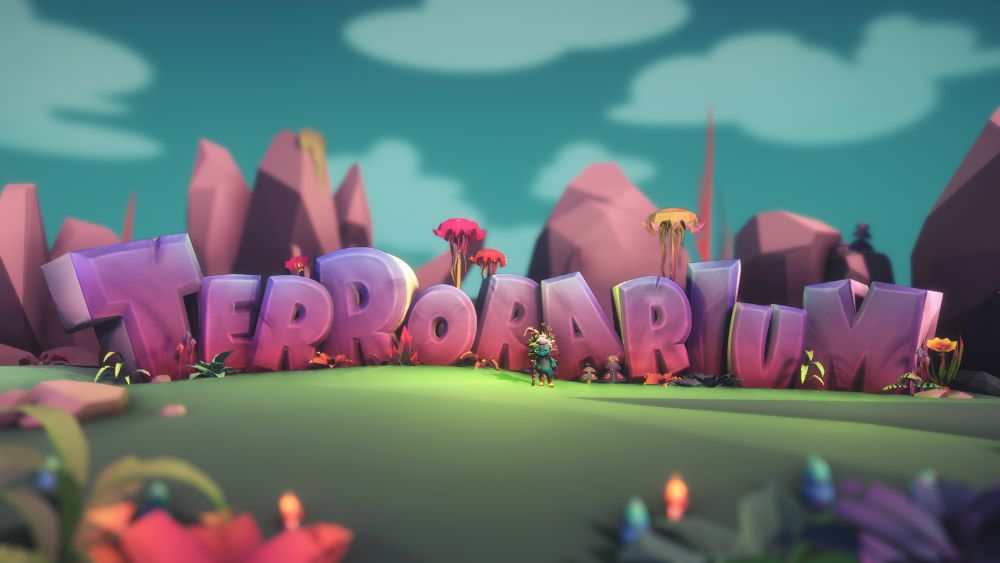 Coherent mechanics can prove vital for a game’s playability. This is particularly true for the puzzle genre, the one to which Terroriarium belongs. Unfortunately, points about puzzle game design (which should be straightforward and intuitive) seem lost on the game’s construction. On top of that, Terroriarium is rife with bugs, awkward controls, frustrating AI pathfinding… and I’ll stop myself there. If things are about to get exhaustive, we might as well get into it.

Before getting into the problems with Terrorarium’s design, it’s important to give credit where due. For instance, many levels exhibit some creativity and fun problem-solving. These have that coveted moment in puzzle games where everything clicks, and you’re able to progress in a smart, satisfying way.

And while the Maker Mode lacks conveniences like an Undo or Redo button, it offers a robust enough framework for some wonderfully inventive player-made content. One level in particular, aptly named Separation Anxiety, had an imaginative and charming mechanical theme to it. However, that specific example also illustrates a fundamental problem running through the whole experience — every single advantage the game attains gets quickly undercut by the larger structure at work.

Now, as mentioned above, certain critiques are particularly salient when it comes to certain genres. In the case of puzzle games, movement and mechanical interactions must be predictable and reliable. Too much rough, messy, erratic movement, and a puzzle that was solved minutes ago is suddenly taking far more time than necessary to crack.

Take this with another design feature Terrorarium eschews: checkpoints. The lack of checkpoints within levels means that if you fail at any point — your Moogus move in a way you didn’t want and unexpectedly tumble into some water and drown, for example — and you must restart the entire level. This is particularly galling in later levels when environments sprawl and present multiple obstacles for the player. The result is that every time your Moogus phase through a wall and into a hazard, dying and forcing a restart, you have to redo every single puzzle you’ve already solved with flawless execution. Else be prepared to do the whole thing over again. Repetition, monotony, and frustration dominate the majority of gameplay.

Of course, it would be unfair to say that Terrorarium’s gameplay never manages to pull off some fun moments. But these moments feel like a single bucket of water cast onto a raging forest fire. It hisses and spits before being devoured by the frustration inherent to the bugs, the controls, the movement, the platforming, and the endless repetition. While there are some interesting ideas, and the game’s central gameplay concepts could work well within a different structure, there’s no ignoring a simple fact. That is, for every few moments of engaging puzzle solving, there are hours of monotonous fiddling.

When turning to the aesthetics and narrative of the game, one finds a strikingly similar problem to those with Terrorarium’s mechanics. When it comes to the visuals, there are some cute character designs and colorful environments. But everything has a sort of “cheap” quality to it, not to mention color-matching issues (like making the targeting arc nearly the same color as the background). Meanwhile, the soundtrack has a sort of upbeat, lighthearted energy to it early on, but becomes tiresome as the hours drag on.

As for the game’s humor and tone, things are predictably a mixed bag. The Gardener’s primary motivation for enacting such mayhem is to win the Intergalactic Horrorcultural Society’s annual murder garden competition, which she has placed second year after year. This is a cute, silly premise for the plot, and certainly one I can get behind for the game’s general feel. However, there are these moments where the humor is driven into the ground by — what else? Repetition.

One scene that jumps to mind is a brief moment when the Gardener is fiddling with a console, surrounded by Spicy Moogus, one of which bursts into flame. Without skipping a beat in her work, without changing her expression in the slightest, the Gardener douses the little redcap with a fire extinguisher. It’s a fun little moment that made me chuckle slightly. Then it happens about four more times, no change whatsoever, culminating in all of them bursting into flame, activating the sprinkler system, and shorting out the electronics.

As elsewhere in Terrorarium, one good concept — in this case, that of a joke — is driven into the ground and sapped of all its potential.

There might be a good game buried in all of Terrorarium’s problems. But it would need such an overhaul that by the time its issues were addressed, most people will have moved on. Some clever design ideas and a couple of decent jokes can’t make up for hours of repetition, frustration, and structural instability.