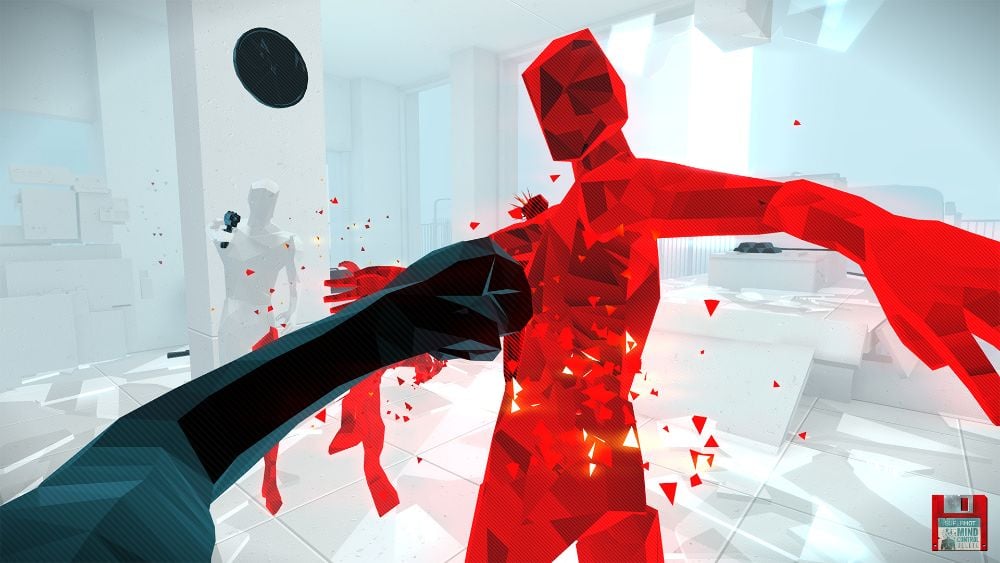 When SUPERHOT came out in 2016, it garnered quite a bit of buzz. Players and critics alike sang praise for its innovative movement, time-freeze mechanics, and distinctive art style.

Less noteworthy? The story, which lacked a clear focus and proved to be the least memorable part of the game.

Now that we’ve come to 2020, the year of tremendous uncertainty, SUPERHOT: MIND CONTROL DELETE is the subject of discussion. Has it managed to integrate a more compelling story? Are the mechanics still fresh and exciting? Are its new features robust enough to justify taking a once-planned DLC and expanding it into a standalone title? To borrow from the game, you’ll just have to read MORE.

Initially, MIND CONTROL DELETE seems an awful lot like its predecessor. It’s got the same basic mechanics and feel, with new weapons thrown in, some structural differences, and nothing overtly transformative. Then, once you’ve started digging into the gameplay, you begin to realize just how much bigger the sequel is than the original. Not only are there new weapons, but there are also new enemy types, abilities, structures for progression, and customizability mechanics, and a slew of other additions and features. Very quickly, you start to see why this was rolled into its own game.

But are these additions compelling? In short, yes. There’s a certain roguelite feel to progressing through levels now. At certain intervals, you’re able to add different perks and abilities to your repertoire. You also unlock more upgrades to add to the pool as you work through the story. It’s fun to specialize in a particular form of combat — melee, guns, throwables, etc. — and let that guide how you approach encounters.

You also have more health than in the first game, where one shot would be enough to do you in. Initially, it seemed as though this would render the game too easy, and early on, that was mostly the case. However, once new enemy types were folded in, the challenge ramped up nicely, and tension was restored. Each new weapon and enemy type changes the flow and tactics of a given engagement, and reacting to these wrinkles adds a welcome dose of dynamism to proceedings.

Of course, one should not espouse the merits of a SUPERHOT without mentioning the audiovisuals. By and large, MIND CONTROL DELETE is even more striking than its predecessor, especially with new enemy types to mix things up. There’s certainly a great deal of satisfaction gained from hurling your katana at a foe, recalling it, and decapitating them. Or, better yet, slicing down an enemy, then whirling and deflecting a bullet back at a distant opponent, and watching with glee as the two shatter in an instant on the replay.

The most glaring issue with MIND CONTROL DELETE is something I noticed rather quickly. I had to ask myself: “are they repeating levels?”

That question is answered with an emphatic “YES” by the game’s design. While I couldn’t tell you how much repetition was featured in the first game (it’s been three years, and then some), it certainly didn’t leave a lasting impression of samey gameplay. Sadly, and for all the variance in enemies and weapons, the monotonous level design is a significant barrier to the followup’s long-term appeal.

To be totally fair, repetition and the senselessness of endless violence is a major theme of the game’s story. That said, a piece of media can do something deliberately, and one might still consider it a mistake. While discussing the pointlessness of violence as juxtaposed with its addictive nature is certainly interesting, actually playing through this idea in the game world proves less engaging. And if the violence starts to become tedious rather than addictive, you’re taken out of the experience emotionally, stifling the story’s ability to have a significant impact on you.

Other factors are somewhat mixed in quality. The replay feature is a wonderful staple of the series overall, but it’s hard to ignore the fact that shooting, when sped-up, tends to look awkward and underwhelming. It’s also something of an odd design feature to have a quota of enemies to kill rather than a particular encounter that you pick apart to the last man. When you reach the quota, all enemies die, and the level ends. In terms of pacing, this is an idea that works well — you aren’t running around every nook and cranny searching for the last man standing — but it makes the game’s design feel less deliberate and more random.

While the marketing for the game boasts its considerable size advantage on the first game, one can’t help but lament the elegance lost with such growth.

SUPERHOT: MIND CONTROL DELETE is considerably larger than its predecessor. It’s more complex, has more exciting progression and abilities, and the combat feels more dynamic and engaging. However, it’s not a complete upgrade. Repetitive level design and a more random feel to encounters start to wear down the game’s staying power. This repetition makes it that much harder to become invested in the story and keep playing to see what happens next.