Overwatch vs. Paladins: Battle of the Hero Shooters 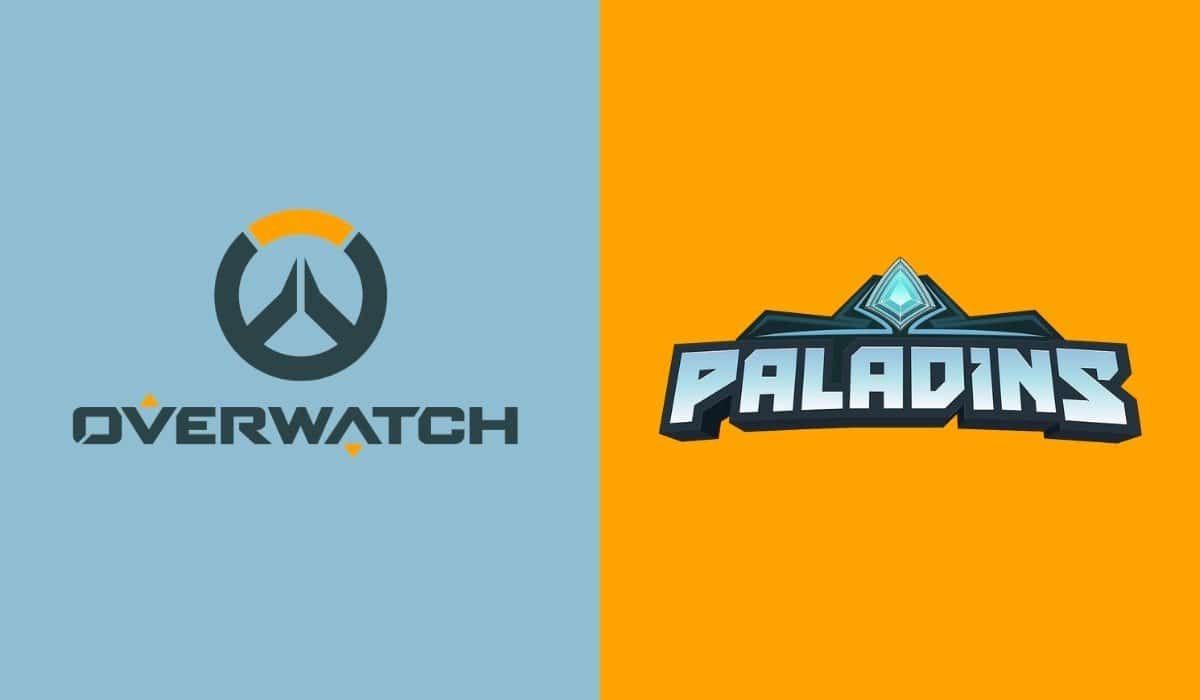 When it comes to Overwatch vs. Paladins, both have become integral pillars in the hero shooter genre. One defined a new style of gameplay, one may have copied the other, but both have developed into unique experiences.

But are they both worth playing? If they do share similar features and mechanics, does one edge out the other? We plan to answer those questions through a deep-dive into the history and structure of each game.

By the end of this breakdown of Overwatch vs. Paladins, we hope you’ll have a better idea of which game best fills the hero shooter-sized hole in your gaming library. Let’s dive in!

Overwatch is a team-based multiplayer first-person shooter developed by Blizzard Entertainment. It was released on May 24, 2016, and was only developed due to the cancellation of the MMORPG Titan. A subset of the Titan team decided to combine elements from their canceled title with the basic competitive role structure of Team Fortress 2, and Overwatch was born.

Role-based team system aside, what really sets this title apart from other competitive shooters is its story. Blizzard worked their magic and injected vibrant characters, subtle storylines, and in-depth lore for the fans to uncover. Over the last four years, Blizzard’s continued investment in the title has helped elevate eSports with the launch of the highly competitive Overwatch League and has paved the way for the highly anticipated 2021 sequel Overwatch 2.

Paladins is a free-to-play multiplayer shooter developed by Evil Mojo and published by Hi-Rez. Released on May 8, 2018, it was one of the first successful hero shooters to emerge after Overwatch (RIP Battleborn). The initial reception was fairly positive, but it struggled to surpass claims of being an Overwatch clone despite being in development for several years before it ever hit the public eye.

Not content to stop at one game, the Hi-Rez team also released a mobile version called Paladins Strike and a battle royale title called Realm Royale. Like Blizzard’s approach to storytelling, each of these games builds on the lore and champions found in Paladins. But rather than utilizing Pixar-esque cinematics, it’s done this with a robust card system and a consistent influx of characters to leverage the free-to-play model.

Which Came First: Paladins vs. Overwatch?

Overwatch dropped two years before Paladins. That said, both games were in development at roughly the same time — it just took a little longer for Paladins to release.

While it’s possible some aesthetic and gameplay elements were tweaked to reflect Overwatch‘s style, it’s unlikely Paladins was designed as a direct rip-off. There are a lot of differences between the two games that will become more apparent as we get into the gameplay, characters, and game modes of each title.

As far as gameplay is concerned, both games take direct cues from Team Fortress 2. You have a team made up of offensive, defensive, and support roles. You leverage shooting and power mechanics in pursuit of more kills or an objective. And that’s kind of where the similarities end.

Success in Overwatch is all about team composition, character choice, and positioning. Heroes are separated into distinct classes (DPS, tank, and support), encouraging players to find the perfect team balance. The game even tells you when a specific player type is missing before launching.

You utilize unique primary and secondary attacks, passive abilities, and an ultimate ability to deal damage, heal allies, or provide some other type of support. To further encourage team balance and clever countering, you can even switch between characters mid-match to better address enemy builds. In many ways, your combined team build is just as (and sometimes more) important than your own skill.

Paladins is far more traditional. While the first-person shooter elements are relatively similar, the player actions and builds are very different. Team composition factors less into your chances of success — it’s more about how you customize your champion. You get a basic attack, three skills that can be swapped out, and an ultimate ability that works pretty much exactly how you’d expect.

The real gamechanger is the card and skin system. Alongside your attacks, your champion can build up a deck made up of three talents and sixteen classic cards. You build your character at the beginning of your match and are locked into your choices for the rest of the match. This makes the prep and build phase far more important than the gameplay, meaning you’ll need to spend just as much time building up your champion as you will playing.

A hero shooter is nothing without fun, diverse, and memorable characters. Luckily, these games have plenty of them. Maybe even too many — every time a new character is introduced, it briefly breaks the competitive meta.

The characters in each game are pretty different from a broad perspective, but there’s bound to be some overlap in their design. For example, Paladins features characters that look and function similarly to Overwatch’s Roadhog, Pharah, and Torbjorn. Likewise, the addition of Brigitte to the Overwatch roster drew scrutiny for looking and acting so similarly to the portable shield champion Ash.

Character similarities will happen more and more as more hero shooters enter the market, especially if they follow the same fantasy/sci-fi aesthetic. What you really have to look at is how the heroes function in-game and what sets them apart.

Overwatch and Paladins share the same basic offense, defense, tank, and support classes character layout. While they fall under different names, the character roles are virtually mirror images. It’s also worth noting that, with Paladins being free-to-play, you only start with six characters unlocked and have to either earn or buy the rest. Overwatch gives you access to everyone up front.

The first notable difference is team size. Overwatch utilizes two teams of six players while Paladins only allows for five on each side. As said before, Overwatch is all about team composition, which makes for interesting character combos with a simplified move list. Each of the thirty-two heroes has one basic skill, one unique skill, and an ultimate ability.

Paladins is far more complex. While the forty-six heroes all still utilize a basic skill, you actually have three unique skills. Add in the personalization offered by the cards and skins, and you can fine-tune every character build in very different ways.

There’s a lot of overlap between game modes with these two Overwatch vs. Paladins, but Overwatch has more than double the options available to play.

Currently, Overwatch has seven distinct game modes. They’ll also typically add in a unique holiday game mode during seasonal events. This is expected to expand in Overwatch 2, but here are the modes available right now:

Paladins spent a lot of time introducing game modes only to eventually retire them. Typically, these former game modes didn’t work mechanically, felt unfair, or simply weren’t fun. In some cases, they just spun off into their own game. That’s left them with three game modes that they’re constantly fine-tuning:

The same mentality that established each game’s approach to game modes extends to map design. Overwatch has far more options with twenty-one maps, while Paladins runs with a respectable ten. The actual design of these maps reinforces the way the developers intend the game to be played.

For Overwatch, the arenas typically have three lanes with a variety of side routes. They are wide-open spaces that allow for vertical gameplay and repositioning when approaching larger rooms. They’re meant to be played as a cohesive team that chooses a path to counteract the enemy team’s approach.

Paladins is far more nuanced. While the overall layout works similarly to Overwatch, the designs also include tunnels, hideouts, and cover to allow for more skirmishes. The maps are also designed around one or more specific game modes, meaning they often have more specialized layouts.

Overwatch vs. Paladins: Community and Support

One thing often noted between these games is that Overwatch feels more alive. From the characters, animations, and overall gameplay to the maps themselves. Some of this has to do with the overall design direction — the rest is due to the lesser graphics in Paladins. This difference has established the focus of each developer over the last few years.

Blizzard has spent their time developing new characters and game modes while also tweaking the overall meta. But this has all had more to do with bolstering the Overwatch League’s eSports potential over just optimizing the game for fans. Sure, it’s led to solid support and updates, but it often goes against what most fans want or expect from the game.

Hi-Rez, in direct contrast, has focused more on optimizing what is already there. Yes, they’ve added more characters and cards, but they’ve mostly been experimenting and honing in on what works. Rather than just adding new maps or modes, they work with what they have and take direct community feedback to inform design decisions.

Both Overwatch vs. Paladins have well-established and passionate fanbases. There’s never a shortage of people to play with, discuss changes, or theorize with. Paladins is free-to-play, so you can expect it to continue operating for years to come as long as they can keep players coming back.

Overwatch has a highly anticipated sequel coming out in the next few years. Blizzard has stated that support will be shared between the two games and that the original will remain a core focus post-launch. That said, we can likely expect to see support lean more in Overwatch 2’s favor in 2022 or 2023.

Paladins vs. Overwatch: Which Is Better?

Although they’ll likely still be treated as copies of one another, we’ve hopefully explained the differences between Overwatch vs. Paladins. really are. Sure, they’re both hero shooters, but that baseline has evolved into very different experiences that are both enjoyable in their own right.

For premium, mechanically refined, character-driven gameplay, Overwatch is the best choice. For a free-to-play experience with robust pre-game customization and strategy, you’re better off choosing Paladins.

Our advice? Give both a shot and see which one sticks. Maybe start with Paladins first (it is free, after all) before spending anything on Overwatch.