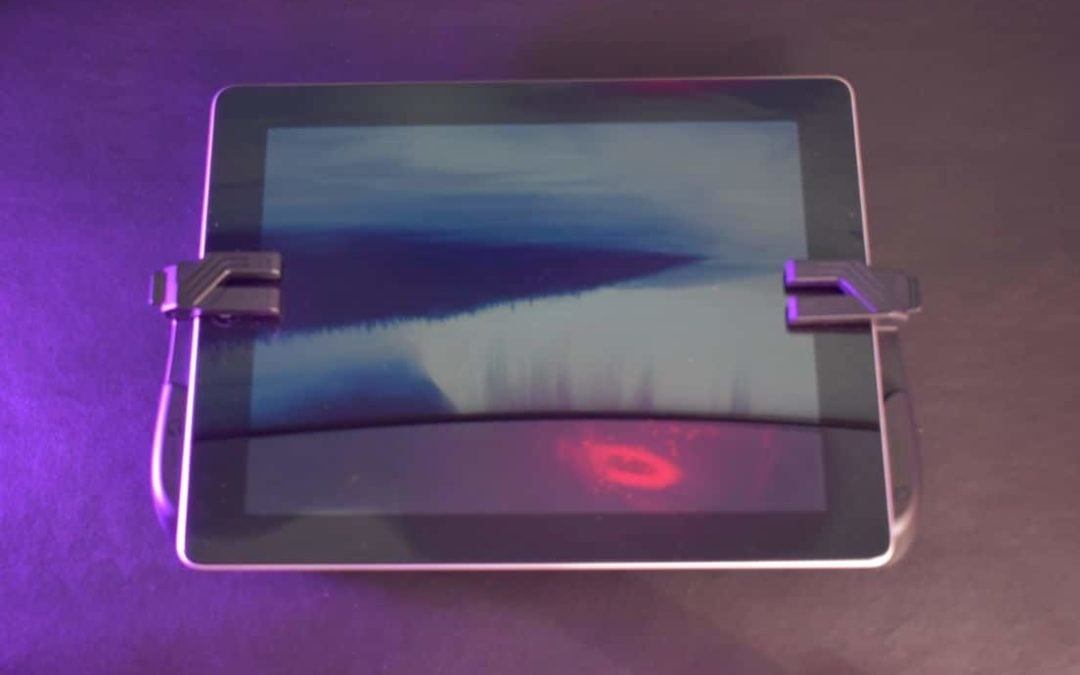 Like mobile gaming, but not satisfied with the flat panel design? Controllers for smartphones like the HyperX ChargePlay Clutch and the Razer Kishi are growing more and more common on the market, but what about something for people who prefer to do their mobile gaming on a slightly bigger screen? Here, we review the GameSir F7 Claw tablet controller, a new solution for enjoying tablet gaming.

GameSir recently released the F7 Claw; a controller which, according to their website, is “compatible with any iPad and Android tablets.” GameSir has more than their share of experience making peripherals at this point. We enjoyed both their F4 Falcon and their X2 in our reviews. Now, they’ve sent us the X7 Claw so we could give you our unbiased review and let you know if it deserves a spot on our list of the 10 best iOS controllers!

The F7 Claw consists of two grips that stick to the back of your tablet with a series of suction cups while a pair of rubber nibbed “claws” clamp onto its face. It doesn’t connect via Bluetooth. Instead, the handles have to be lined up so that the physical nibs on the claw are pressing buttons on the touch screen. The handles themselves have an all-black, ergonomic design. They’re comfortable in the hands and have a nice, grippy texture, improving the overall comfort of holding a tablet.

Each controller features a power switch, USB Type-C charging port, two triggers and a turbo button that controls the “burst frequency” of the L1 and R1 buttons respectively. It’s worth noting that they must each be charged separately and GameSir only supplies a single charging cable. The buttons are very clicky. Some users may like that, while others may find the sound annoying. Unfortunately, that’s where the good news ends.

We tested the F7 on an iPad and a Fire tablet and the grips didn’t work with either very well, in spite of GameSir’s instance that they are compatible with any Android or Apple tablet. The iPad was too heavy, allowing the suction cups to slip and the tablet to wobble and slide. The smaller Fire tablet felt more secure, but the claws obstructed a significant portion of the screen.

Is it Good for Gaming?

The use case for the F7 is extremely limited. It seems to primarily be designed for games like Call of Duty: Mobile and PUBG: Mobile, where the nibs can line up with buttons on the sides of the screen. Even then, gamers may have different experiences based on how the claws line up with those buttons. This can cause even more issues when the suction cups slip.

Slippage from the suction cups is not only distracting, but could risk you dropping and damaging your device. It doesn’t work well with all tablets as it claims and the number of games itworks with as intended are sparse.

Is the F7 Claw Worth the Money?

The market for Tablet controllers is much smaller than smartphone controllers, particularly for trigger only designs like the one offered by the F7 that keep your thumbs free for screen-based control. Even so, the F7 is difficult to recommend based on our testing. Especially since similar products seem to be available at less than half the price.

Overall, users might be better off with a Bluetooth controller like one of the ones on offer from ipega.

The GameSir F7 Claw maybe useful with certain tablets for certain games, but it is generally unwieldy and frustrating to use. Throw in a high price point and it becomes very difficult to recommend.

View on Amazon View on Gamesir