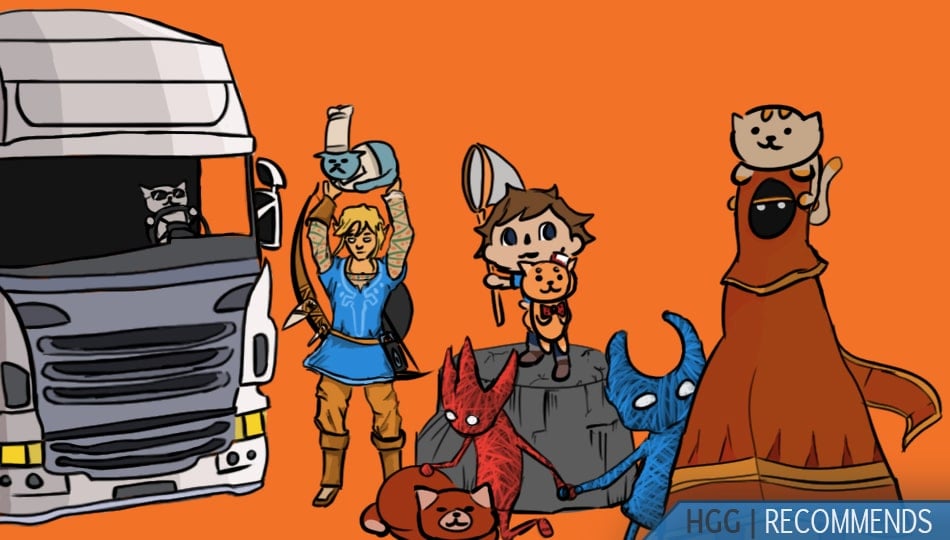 Life is stressful. Factor in the current situation where we’re all confined to our homes, and it’s enough to drive anybody up the wall. Fortunately, video games offer a welcome escape from the daily grind, which is why many of us are looking to the best relaxing games as a helpful escape. For me, that’s meant a deep-dive into the complete Ace Attorney series and a nearly month-long vacation on the deserted islands of Animal Crossing: New Horizons, which has been a welcome distraction and a comforting environment right when I needed it.

Trust me – I get the need for something calming right now, which is why this next game roundup is a list of the top 11 most relaxing games for PC, console, and mobile platforms. Please read on for some recommendations!

Let’s get right into the list with an in-depth look at #11.

The Sojourn is a visually striking game that tells its story entirely through moments suspended in time. Although the game’s primary focus is on its cleverly-designed puzzles and beautifully-rendered graphics, the story is ultimately one of growth and holding onto hope even as innocence is lost. Players proceed endlessly forward as they solve a series of puzzles, uncovering the slowly-unfolding story of a child’s life in a mysterious land.

Puzzles are solved through careful manipulation of statues, each with special abilities that introduce new mechanics for more elaborate gameplay and solutions. Players must use spatial awareness and memory to manipulate the statues and their environment, progressing through the games and unlocking bonus levels with each successful solution.

The Sojourn’s simple premise combined with engaging puzzles and beautiful art makes for a perfect unwind at the end of the day. If you’re interested in a more detailed breakdown of the game, check out our review here!

Unravel Two is a beautiful game about cooperation and friendship. The adventure follows two anthropomorphic yarn creatures on their quest to return light to an old abandoned lighthouse and drive away the oppressive storm. The two creatures (known as Yarnys) are connected by a single string that requires teamwork and cooperation to solve environmental puzzles.

Although Unravel Two can be played solo, the game really shines when played as a two-player couch co-op with each player controlling a different Yarny. The game’s themes of togetherness feel all the more personal when players must work together to solve puzzles and free other Yarnys that have been trapped throughout the world.

If you’re currently isolated with a potential gaming buddy and are looking for a sweet game to enjoy together, this game is a delightful option to consider!

There is nothing complicated about Neko Atsume: Kitty Collector. On the contrary, it’s a game that thrives on its own simplicity and cuteness. The premise of the game is literally in its name — the player’s goal is to attract as many kitties to their garden as possible, using the gold and silver sardines that the kitties bring as thank-you gifts to purchase additional garden upgrades, food, and toys for their growing kitty collection.

The game is free-to-play and endless, as the player can continue attracting kitties as long as they actively put food out for them. There are a large number of different cats in the game, with special themed cats that only appear when certain foods and items are placed into the garden. If you’re a cat lover and don’t mind a bit of pointless fun for the sake of getting to watch cute, cartoon cats romp around a garden of your own design, consider picking this one up!

If you’re someone who sees long, quiet road trips as the perfect avenue for relaxation, Euro Truck Simulator 2 is the ideal option for you. In ETS2, drive articulated trucks through a downsized simulation of Europe, picking up and delivering cargo in various cities across the map. Landscapes are beautifully-rendered, and the introduction of the game’s radio makes for a peaceful and atmospheric journey.

The game also takes on small management simulation elements as players complete deliveries. This opens up the option to open your own delivery company, purchase trucks and garages, and hire other NPC drivers to handle deliveries.

For Journey, there is nothing more inherently peaceful than the thought of feeling impossibly small and anonymous in a vast and wondrous world. Players control an unnamed, robed figure on their journey (get it?) to reach a distant mountain. They’ll encounter environmental obstacles that can be overcome with the figure’s powers of song and flight. As the game progresses, the player can add to the length of their rune-embroidered scarf, giving them a longer period of flight that helps with traversing more demanding environments.

Throughout the game, players may encounter other real-time sojourners on their own travels. These players cannot be interacted with outside of the same musical chime used to solve certain puzzles, and they remain unnamed until the game’s credits roll.

If you gravitate toward deep, emotional storytelling and the peaceful comfort of anonymity, I strongly encourage you to give Journey a try!

RiME is a lovely puzzle game about love and loss, following the journey of a young boy who is guided across a mysterious island by a fox-like spirit. As the young boy quests to reach the tower in the island’s center, he begins to recall the circumstances surrounding his being on the island and the origins of a strange figure in a red cloak that appears throughout his adventure.

The game’s puzzles are solved through a combination of running, climbing, interacting with objects, and using abilities like shouting and singing to trigger special events in the environment. If you enjoy dynamic puzzle-solving and emotional storytelling, RiME may be a good fit for you!

In ABZÛ, players can explore and revitalize breathtaking aquatic landscapes with the use of magical springs. Players begin the game as a diver who has awoken on the surface of the ocean and must uncover the secrets of a ruined civilization, discovering and utilizing an incredible new power to restore life to the dying sea.

ABZÛ’s gameplay involves controlling the diver through the vast ocean, solving puzzles and interacting with local wildlife to progress through the story. The simple story and straightforward mechanics encourage players to spend time in the beautiful underwater world, taking a moment out of their busy and stressful lives just to sit and meditate in the serene waters that surround them.

Gris is a stunning game that combines simple platformer mechanics with concise and compelling storytelling. The game’s fluid, watercolor-like art and animation create a soft and welcoming environment that beckons players in and guides them along on their journey.

Players take on the role of a young girl named Gris, who has fallen into a colorless world that exists only in shadow and small pinpricks of light. As Gris quests to rediscover her lost powers and return home, she must also find ways to put life and color back into the world around her.

Stardew Valley is a must as far as relaxing games go. After all, a large part of the game’s premise is the escape from the busy city lifestyle, and the romanticization of small-town farm life is present in every beautiful second of the game’s gentle pace.

In Stardew Valley, players spend their time developing their farm, purchasing upgrades and new materials with rewards gained from farming, foraging, fishing, and mining. Players can also pursue side quests by completing odd jobs for villagers and donating supplies to the town community center, which in turn unlocks additional upgrades for the town. Players can also pursue friendships and romantic relationships with the NPCs, living out a full fantasy of quiet farm life surrounded by vibrant, pixellated graphics and a peaceful soundtrack.

If you already love Stardew Valley and are looking to while away a few hours with some other farming/life sims, check out our roundup of similar games here! Alternatively, if you enjoy playing with mods and are looking for a new way to experience the game, feel free to look into our recommendations for the best Stardew Valley mods here.

2. The Legend of Zelda: Breath of the Wild

Although Wind Waker will always hold a special place in my heart, Breath of the Wild has quickly become one of my favorite titles in the series. This time around, Link awakens in the ruins of a once beautiful and prosperous Hyrule, devoid of all memory of his previous life and armed only with the knowledge that he must defeat Calamity Ganon to save the kingdom and Princess Zelda.

The game returns to the explorative roots of the franchise, following Link through a vast, open world with thousands of secrets and mysteries to uncover. Unlike most of the other 3D Zelda titles, Breath of the Wild allows players to choose their own path through the story. They can tackle the Divine Beasts in any order they want (or not at all!), explore the many shrines scattered about the kingdom, customize their gear, and much more. Adventure and beautiful landscapes await around every corner, and there’s nothing quite like riding through Hyrule field at night, accompanied by a soft piano rendition of the game’s central tune.

This isn’t a title you want to miss out on! If you’d like more information, feel free to check out our review here.

The most relaxing game overall

In this delightful little game, players act as the resident representative of a deserted island that they are in charge of developing into a bustling community. New developments are unlocked as players proceed through the game, building new houses and making landscape changes to perfect their island paradise.

Animal Crossing: New Horizons introduces a new currency called Nook Miles, which players can use to purchase unique items and decorations for their islands. Nook Miles can also be exchanged for plane tickets that take players to procedurally-generated islands, where they can gather additional resources and even find new residents to invite to their island.

If you’re on the lookout for a wholesome and colorful game that showcases Nintendo’s modern approach to a beloved franchise, consider picking this one up! You can check out our review here.

Thanks for checking out our list of the top relaxing games! I hope that some of the above titles sparked your interest, but if you have suggestions for other “chill” games that can help us all get through this stressful time, please feel free to comment and share your recommendations. We’re always happy to hear from you, and we’re all in this together!

From all of us here on the High Ground Team: stay safe, and happy gaming!