The Best Flight Sticks in 2021 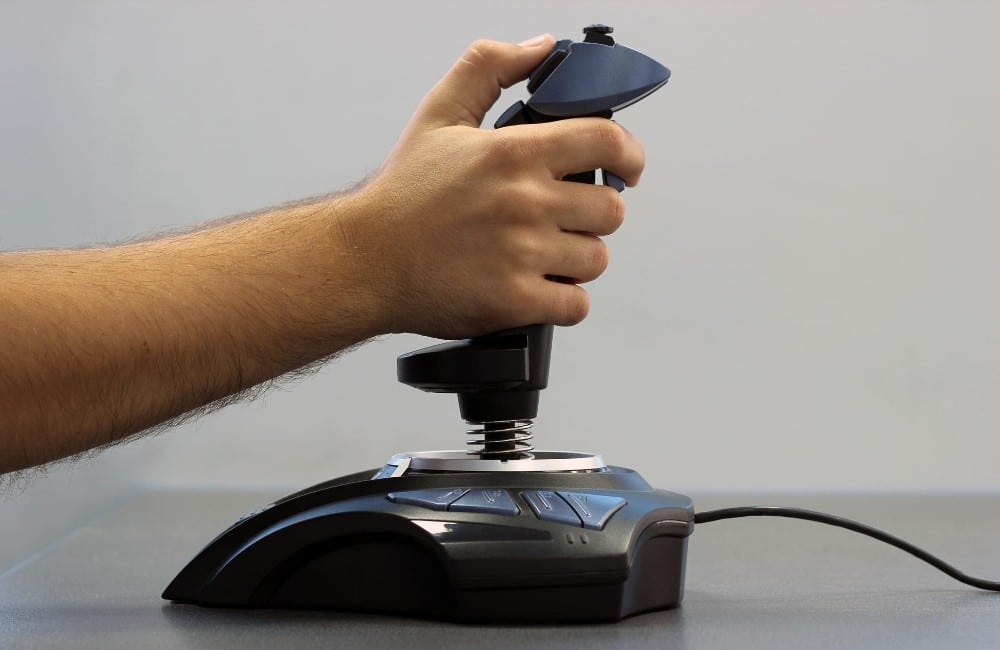 Love flight simulators? One of the best flight sticks or HOTAS (hands-on throttle-and-sticks) is essential to complete the experience. You’ll never go back to a keyboard-and-mouse after your first dogfight or evasive maneuver handled like a true pilot.

The problem? If you’re ready to make the switch, the massive number of options can seem overwhelming. What sticks have the features you need to outfly the competition? And is a HOTAS really necessary? Fortunately for you, we’ve done the legwork to find the best of the bunch for your cockpit.

Let’s take a look at the best flight sticks for different platforms, games, and limited budgets — starting with the PC.

Let’s jump right into the best flight sticks list with a look at our #1 top pick.

The best flight stick for PC

There may be gear that’s better on individual metrics, but the Thrustmaster T16000M FCS HOTAS Controller is the flexible HOTAS ready to meet all your needs (and then some). And it shows up at a price that won’t make you think twice about upgrading your graphics card as well.

This particular setup sports an ambidextrous design on the joystick. For the rare game that supports two joysticks, you can dual wield to your heart’s content by reconfiguring the stick for either right or left-handed play. Left-handed players rejoice!

So why buy a HOTAS? If you’re a fan of spaceflight sims, it’s simply the best way to put yourself right in the cockpit of your spacecraft. You’ve got throttle in one hand and maneuvers in the other. When coupled with the extra buttons on the throttle side, there’s nothing outside your control. Of course, it requires the extra desk space that only PC users can spare. But it’s worth every square inch you spend for the raw immersion.

If you’re new to the skies and seeking the best flight stick for PC, look no further than the Thrustmaster T.16000M FCS HOTAS Controller.

I remember booting into Windows 98 to play Mechwarrior 2, Descent, and X-Wing vs. Tie Fighter with a Logitech joystick. It’s oddly comforting to see that they’re still a major player in the flight stick and HOTAS market. And for the Elite Dangerous CMDR (which I am), they field a top-tier HOTAS in the form of the Logitech G X52 Flight Control System.

Playing Elite Dangerous with a HOTAS makes perfect sense — especially in VR — given the layout of your cockpit in-game. But playing without an HMD allows you to take full advantage of the integrated LCD screen and customizable commands. Logitech boasts that the X52 sports 282 programmable commands at minimum. In other words, every aspect of your flight will be under your complete control. Bind common maneuvers, toggle combat mode, or dump auxiliary power to weapons — so you can focus more on turning hostile ships to slag. Or peacefully strip mining deep-space asteroids. Whatever your jam is.

As for the rest of the specs here, the X52 is rock-solid in all departments. It’s got all the buttons and switches you need to feel like an actual pilot. And while the flight stick sports a twist rudder, you can lock it if you’ve got a set of rudder pedals (which you really should).

Rounding out the package is the 5-position grip system that allows you to scale the joystick’s handle to your specific hand size. This “one size fits all” tech means you can game in comfort until the sun rises again — or at least until you warp back into the Sol system. When it comes to the best flight stick for Elite Dangerous, you’ll find it right here in the Logitech G X52 Flight Control System.

Sometimes you just need a stick in your hands and the open sky before you. If you aren’t concerned with all the bells and whistles, you can’t go wrong with the Thrustmaster USB Joystick. It has all the fundamentals at a price that simply can’t be beaten.

Plug-and-play with a free USB port, then take for your favorite flight sims. Enjoy four built-in buttons, a POV hat for camera control, and a trigger in case you need to send some hot lead downrange.

The Thrustmaster USB Joystick is ideal for those looking ahead towards the latest and greatest Microsoft Flight Simulator launching later this year. If you’re new to flight sims and wondering whether it won’t be your point-of-entry, the Thrustmaster USB Joystick is the best budget flight stick to feel out your place among the clouds. You could always upgrade to a HOTAS later.

Spaceflight is only part of the package for Star Citizen, the eternally-in-development sci-fi simulator that promises a sprawling universe of adventure. But when you’re at the helm of your virtual flagship, you want gear that’s going to hold up to the rigors of intergalactic travel.

Enter the Thrustmaster T-Flight HOTAS X Flight Stick, an all-in-one HOTAS solution built to accompany you from one end of the galaxy to another.

It’s low profile and all integrated as one unit. So when you exit the cockpit, it’s easy to relocate as you switch to mouse-and-keyboard controls. Don’t let the price fool you — T-Flight offers programmable buttons and onboard memory for saving your customized profiles, just like its more expensive counterparts. Toggle between them with the PRESET button, and off you go. Different ships demand dynamic controls. Save a profile for each starcraft in your fleet, and you’ll be ready for anything.

Just in case things get hot, the weighted base keeps the HOTAS firmly in place. The last thing you need is to be chasing your HOTAS across the desk in a dogfight. Thrustmaster has thought of that and more, and it’s all crammed into a relatively affordable package. That’s why the T-Flight HOTAS X Flight Stick is our choice for the best flight stick for Star Citizen.

The best flight stick for PlayStation

While it’s a multi-platform series now, Ace Combat got its start on the PlayStation. So let’s be honest: no matter where it wanders, the series has its home on PlayStation. When you’re looking to play Ace Combat on your PS4 — or any flight sim, really — look no further than the officially branded and compatible Thrustmaster T-Flight HOTAS 4 Ace Combat 7 Skies Unknown Edition flight stick.

This is an all-in-one package with both the stick and the throttle ready for combat. But unlike some all-in-ones, the throttle is detachable — making this an attractive and flexible option for couch gaming. Regardless of where you post up for PS4 gaming, this HOTAS can accommodate your seating arrangement. Not to mention that being designed for PS4 means you get all the unique system buttons you need to share your glorious victories or access the PlayStation’s operating system.

The HOTAS 4 also boasts a dual rudder system, meaning that the joystick can simulate the functionality you’d otherwise get with a good pair of pedals. Yaw through space like a champ, or use the progressive toggle switch if torquing the joystick is too distracting in the midst of combat. While a pair of pedals simply can’t be replaced, this is as good as it gets without them.

Practical ergonomics round out the offering here, meaning you’ll be comfy during extended play sessions. And when you’ve had your fill of modern aircraft, this flight stick is ready to venture through No Man’s Sky with you as well. That’s why the Thrustmaster T-Flight HOTAS 4 Ace Combat 7 Skies Unknown Edition (golly, that’s a mouthful) is our choice for the best flight stick for PlayStation. Now take to the skies and conquer.

The best flight stick for Xbox

Why change what isn’t broken? That was the rhetorical question on the minds of Thrustmaster’s designers when making the T-Flight HOTAS One. This is essentially the same HOTAS as the PS4-branded T-Flight HOTAS 4, simply reconfigured for Xbox One. That said, it’s still a stellar HOTAS ready to fly you through Elite Dangerous and beyond.

Like the HOTAS 4, the HOTAS One has a detachable throttle for convenience. And with Microsoft’s commitment to integrating their ecosystem across all devices, your Xbox-specific buttons will work on your Windows 10 PC as well. When you’re ready to upgrade from the entry-level flight sticks to make the most of your Microsoft Flight Simulator experience, the HOTAS One is the next natural step.

Also carried over from the HOTAS 4 is the dual rudder system, meaning that the joystick doubles as your virtual rudder for Y-axis course corrections. This comes in especially handy for modern flight sims. But aspiring space pirates will certainly be thankful for the extra maneuverability when threading the needle while approaching a space station.

Whether you’re grinding out your Elite ranks in Elite Dangerous or exploring the world in Microsoft Flight Simulator, the T-Flight HOTAS One is simply the best flight stick for Xbox.