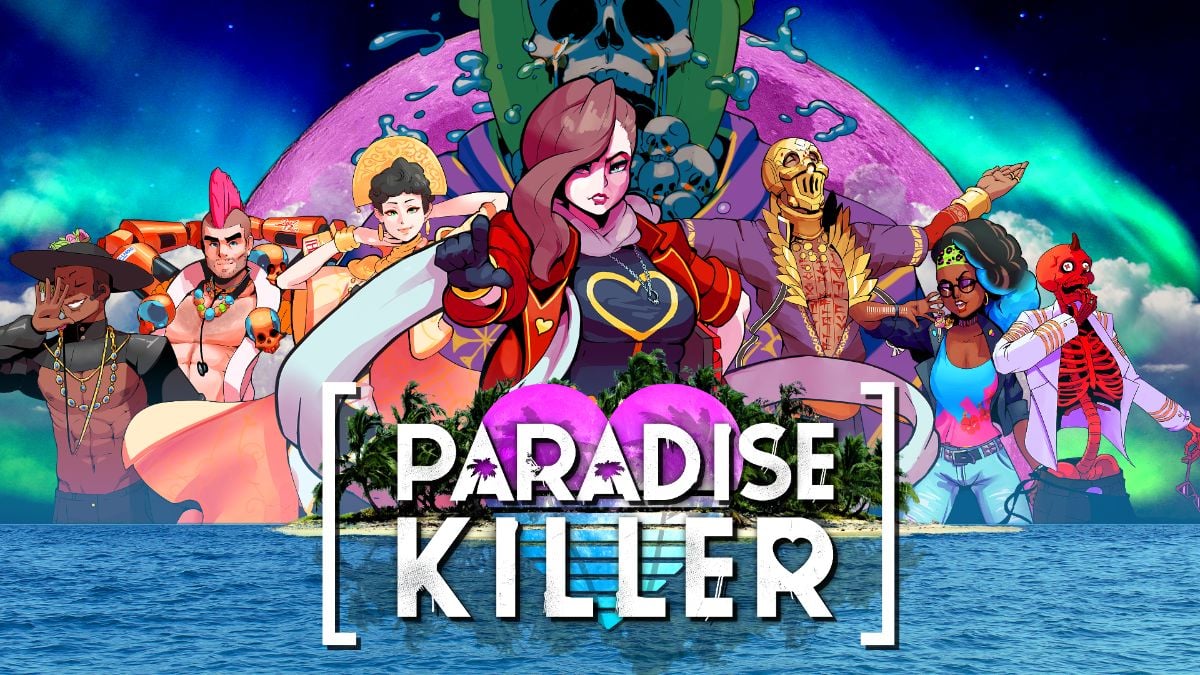 Sometimes, a game draws you in from its very first moments. There’s something about its aesthetics, its mood, maybe a particularly compelling story hook that catches you and reels you in.

Sometimes, investment develops slowly and builds over time. Perhaps it’s even somewhat hindered by early exposition (particularly for games with robust story worlds) — but before you know it, you’re sprinting to the next lead, wondering what sort of depraved, bizarre conspiracy you’ll uncover next.

Paradise Killer falls squarely into the latter category, with something of a clunky introduction belying its strengths. Despite the slow start, Paradise Killer uses innovative worldbuilding and storytelling to spin its yarn into a compelling tapestry of mystery and murder.

Aesthetics play a prominent role in Paradise Killer. It’s clear that the visuals draw a lot of inspiration from anime, and the island on which the story unfolds — Island Sequence 24 — is vibrant and colorful and bizarre, just like its inhabitants. Character designs are unique and deliberately garish, the architecture is grand and gaudy, and every visual element fits into a larger tapestry of idiosyncratic technicolor eccentricity.

The soundtrack, which grows each time you collect a tape from towers scattered across the island, provides a nice mixture of chill and upbeat synth-heavy audio. It meshes with the aesthetics perfectly, and songs like “Paradise (Stay Forever)” are likely to stick in your head for a good while after playing the game. The audiovisuals blend perfectly to create a wonderfully atmospheric game environment.

The tone of Paradise Killer, meanwhile, is tongue-in-cheek, cynical, and a tad surreal. Sometimes this can be grating (the demon who goes by Shinji dips into the “LOL, SO RANDOM” school of humor a little too often), but typically this integrates well into the aesthetic framework of the game. The tone and atmosphere at play here are nearly pitch-perfect, giving the game enough flash and style for you to stick around and let yourself become invested in its world and story.

The worldbuilding in Paradise Killer is a bit of a mixed affair. On the one hand, there are many exciting aspects at play, especially once you start delving into the power politics of the Syndicate and those who are beholden to their whims. The islands and their history are fascinating, and it’s fun once you’ve got a basic understanding of their workings. The key, however, is that you’ve got to achieve that basic understanding first. And this where the game stumbles.

As you’re introduced to Lady Love Dies, the game’s protagonist and a consummate “investigation freak,” rather than conveying the basic mechanics of her life and world by folding them into a well-paced introduction, the game grinds to a halt. What follows is an extended monologue in which Love Dies explains concepts she already knows to herself, purely for the player’s edification. While monologues are certainly an established part of noir fiction, this moment feels at odds with the rest of the game, which manages to convey lore and worldbuilding with solid visuals and natural opportunities.

And then, of course, there is the game’s assortment of secrets and collectibles that help flesh out the setting. In addition to providing valuable context for the events currently unfolding (and key items to conduct your investigation), these items are fun to find and collect. Many are gated behind platforming puzzles, which, while fairly simple and straightforward, are satisfying to solve and provide the basis for a good chunk of the game’s non-dialogue gameplay. While negotiating object collision is a little clunky in spots, the framework for platforming in Paradise Killer is generally solid and allows for breezy, fun traversal.

I Was Born to Investigate

As for the story of Paradise Killer, it’s a compelling web of lies and conspiracies. Whenever you find a lead, it’s genuinely exciting to keep pulling and follow where it takes you. Every time you think one person is a likely candidate for slaughtering the Council, another piece of information sheds suspicious light on another inhabitant of the island.

Investigations as a plot device also provide a very convenient excuse to dig into character motivations directly, a fact that Paradise Killer understands fully and exploits to its advantage. As cartoony and outlandish as they are, these people are fleshed-out and distinct, and it’s interesting tying their motivations to the larger incentives their world provides. Furthermore, they have complex histories and relationships with one another, prompting a constant shift in perspective as you suss out each character’s connections and rivalries.

Paradise Killer is stylish, idiosyncratic, and offers a compelling mystery as a throughline to boot. There’s some clunky exposition early on, and certain puzzles permeate the experience (the Nightmare Computers come to mind) and become tiresome over time. That said, the world and its surprisingly grounded inhabitants (in terms of their motivations and politics, anyway) sink their hooks into you and draw you into the mystery tearing Paradise apart. Remarkably detailed and artistically realized, this world is one I’d happily return to.