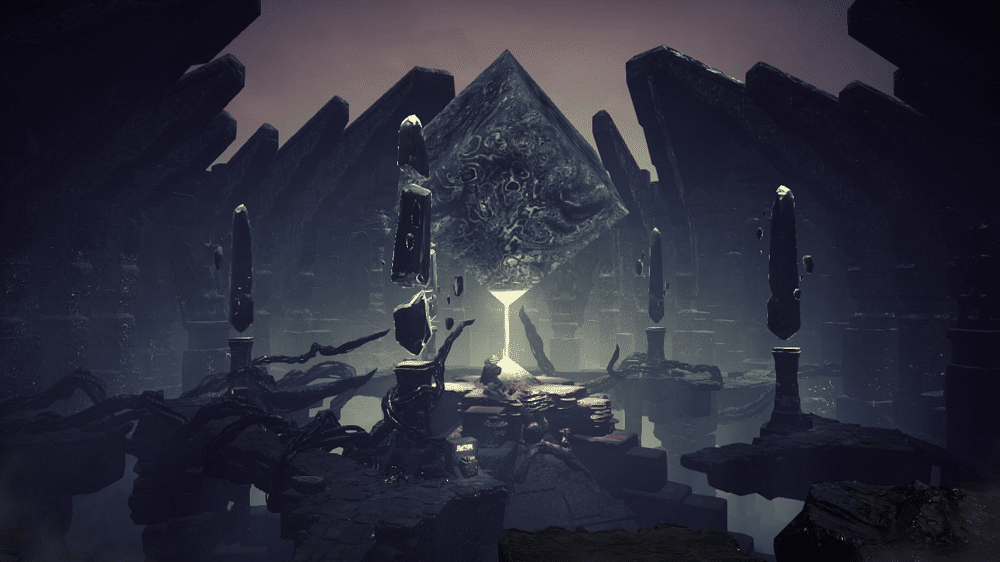 Down to the title, Moons of Madness is very obviously inspired by the works of Howard Phillips Lovecraft. Protagonist Shane Newhart hangs a framed picture of the degree from his alma mater, Miskatonic University, eldritch, tentacled monstrosities stalk after him relentlessly, and the chants of deranged academics will be instantly recognizable for anyone who’s uttered the words “Cthulhu fhtagn.”

But play for a bit and you’ll recognize other influences pretty quickly. The evil corporation and untrustworthy, accented scientist both recall Ridley Scott’s Alien. Visuals of Mars and the Invictus base could easily have come from 2015’s sci-fi/drama The Martian. These influences make for an interesting blend, although they have a tendency to render the plot rather predictable.

The story of this game unfolded without any big surprises or particularly salient insights into humanity or its place in the cosmos (Lovecraft might describe that place as irrelevant, insignificant, etc.). However, with superb atmosphere, relatable character interactions, and engaging puzzles, Moons of Madness easily stands as a strong entry in the (quite large) Lovecraftian gaming canon — and it’s set on Mars!

One of the central themes of Lovecraftian Horror is the fragility and insignificance of humanity in the grand scheme of things. All of the tools available to our small minds can only hope to stave off oblivion temporarily. In fact, our profound irrelevance may be the only thing protecting us from being fully conquered or obliterated by those who occupy the spaces between dreams.

The opening of Moons of Madness features Shane attempting to repair equipment that keeps mysteriously breaking down. Although humanity has exerted enough control over space travel to overcome the hostile environment of Mars, other, stranger forces are at work. Despite their technology and scientific acumen, Shane and his fellow cremates are wholly unprepared to face these forces. They seek to answer the question “are we alone in the universe?” Perhaps it is a question they should never have asked.

Instilling feelings like those described above is important for any work inspired by Lovecraft. Luckily, Moons of Madness does this marvelously. While the visuals aren’t cutting edge, and textures can have issues loading at times, the art direction is superb. Sickly greens and angry reds attack the darkness — light offers not hope, but confusion and unease. One is struck by the scale of the cyclopean ruins hidden beneath the surface of the red planet, with reliefs and friezes which look to have been chiseled out by giants untold eons ago. The sound design complements the visuals well; errant, half-heard sounds and crescendos of sinister music enhancing the dread.

As far as the writing is concerned, some elements work, while others fall flat. Character interactions, particularly between Shane and Declan, are endearing and fun, and Shane’s reactions to the horrible things happening around him are humanizing and relatable. However, the plot of the story is often quite predictable, and while the game mostly manages its influences well, it strays into tired tropes here and there. In terms of horror, the game employs some effective jump-scares and some very creepy moments, but it is unlikely to stick in your head and keep you up at night (go ask Ari Aster for help with that). Overall, Moons of Madness is best when the audiovisuals are allowed to shine, when Shane and Declan can brighten the mood together, and when the madness sets in.

Rats in a Maze

While areas continue to introduce new mechanics over the course of Moons of Madness, the gameplay can be divided into two broad categories. Puzzles and exploration comprise one of these categories. Early on, puzzles are quite simple, and this does a good job of lulling players into a sense of security. This makes for a well-paced introduction, for even though things start slow, it serves as a basis for unnerving both Shane and the player when something unnatural interferes with maintenance and repairs. Later, puzzles become much more involved, and there’s a good variance in complexity to the problems you solve.

The other broad category encompasses encounters and setpieces. There are a couple of fast-paced chase sequences, and these are well-designed, guiding you intuitively towards the right path without feeling overly restrictive. It’s also a nice touch when machinery is slow to react to inputs in the middle of a chase and Shane begins to curse at the tech and urge it to go faster; his words tended to be quite similar to my own in these moments. Overall, the chases don’t offer a huge amount of challenge, but they serve the pacing of the game well.

However, other encounters with enemies tend to be more hit-or-miss. Some will offer a moderate challenge, but one particular stealth section feels overlong and uninspired. It wasn’t simple enough merely to breeze past it, but it also wasn’t frightening or thrilling enough to be very engaging. Combat doesn’t really feature in the game, but there is a large action setpiece that is built up with puzzles and lore notes and benefits from effective pacing and execution. None of the encounters are pushing the envelope in terms of mechanics, but for the most part, they’re well-constructed and competently-implemented.

Much of the story of Moons of Madness is conveyed through environmental design and PC terminals containing notes and emails from various characters. As mentioned above, the environments are atmospheric and evocative, while the in-game text often provides valuable characterization, worldbuilding, and some good old-fashioned Lovecraftian verbosity. Look closely and you’ll discover Mythos Easter eggs and cute touches (a toy rocketship deposits tiny astronauts when you interact with it), as well as glimpses into the daily lives of the ill-fated crew — Chess is a popular pastime among these astronauts, for instance.

The game also does a good job of keeping things fresh and moving at a brisk pace. New areas are frequently introducing mechanics, but these are almost always manageable in terms of complexity, intuitive in their application, and at least mildly interesting in terms of the challenge they offer. It also helps that certain mechanics like the Biogage and EVA suit persist throughout the game, providing a bit of stability and consistency to counterbalance the rapid changes encountered as the plot progresses.

Game description: Moons of Madness tasks players with repairing life-saving tech, solving puzzles, dodging eldritch monstrosities, and discovering exactly what’s going on amid the dust and rock of the red planet. Shady organizations, unhinged academics, and mutated plantlife are just a few of the things with which protagonist Shane Newhart must contend.

Although it lacks in originality or surprise, Moons of Madness successfully launches Lovecraftian Horror to Mars. With an unsettling atmosphere, keen art direction, and a potent mixture of puzzles and setpieces, the game is an appropriately creepy, oppressive adventure through the void and between dreams half-remembered.