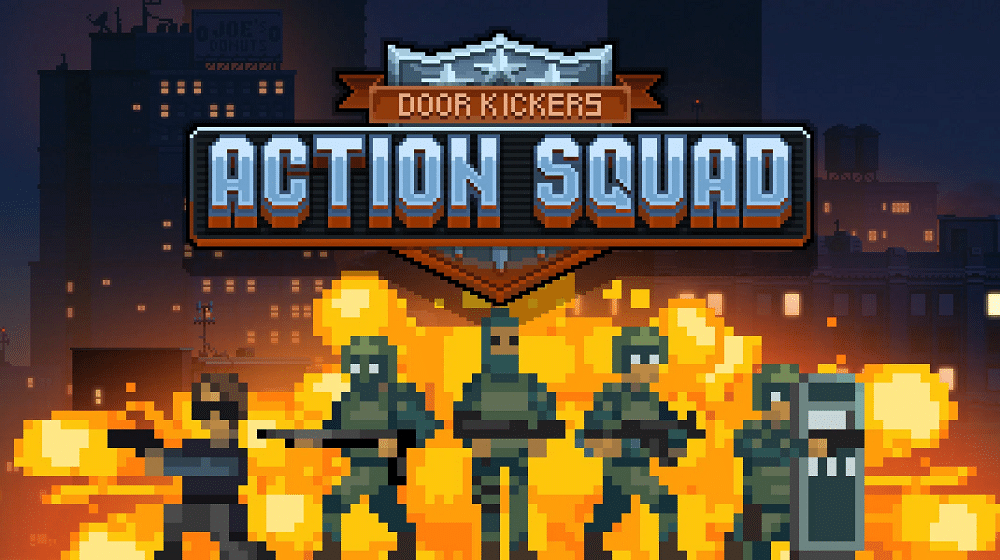 Door Kickers: Action Squad feels like a madcap pastiche of 80s action movies draped over a meticulously-designed, tactically-driven side-scrolling shooter. The developers clearly wanted to deliver a lighthearted, tongue-in-cheek, badass door-kicking action game; and for the most part, they did that. Every now and then, however, something horrific happens, and I’m left questioning my own humanity, and that doesn’t feel like an intended part of the experience, but who knows? All I know is that there are some folks who need our help, and some baddies who need an ass-kicking. Let’s breach and clear.

Door Kickers: Action Squad is a thoroughly absorbing game to play. From preparation to completion, missions offer a number of compelling options for the player to consider. Character choice is important ⁠— if you need to see into a lot of dark rooms, Recon is your man; pick Breacher if you need a door knocked down and everything behind it turned to paste. Each character can be equipped with weapons specific to them, as well as gear items available to the entire squad. Once the mission has begun, there are plenty of tiny choices to consider. For example, do you climb a ladder knowing there’s a knife-wielding maniac at the top, or try to find a way around? Facing a group of heavily-armed foes, do you smash your way in and roll for cover, or toss a smoke grenade, open the door, and launch a surprise attack on your unwary targets?

However you choose to approach a situation, kills and hostage rescues rack up Strategy Points (SP). You could take a small boon, spending your SP to replenish your depleted supply of breaching charges, for example. Otherwise, you could save up your SP for your character’s Ultimate. These powerful weapons and abilities can be character-specific, such as Agent Fergie’s Akimbo Pistols, or they can be used by multiple characters, like Sniper Support.

This creates a nice tension between risk and reward, forcing you to consider whether a situation calls for a quick, dirty approach ⁠— rushing down enemies, hoping that aggression and tanking damage for an early Ultimate will overwhelm any opposition; or whether it calls for a deliberate, prudent approach ⁠— spending your SP on armor and a flashbang resupply, focusing on defense and crowd control in order to win the day.

Take this system with the level design, the variety of enemies, and the clear thought that was put into the encounters of Door Kickers, and you’ve got a potent retro action game. Environments facilitate tactical maneuvering and creative breaches. Gunfights are typically short, brutal outbursts that can swing wildly in either direction. Various objectives such as rescuing hostages, arresting VIPs, and defusing gigantic bombs also help keep things fresh as you progress through the levels. Level-to-level, Door Kickers is an enjoyable experience.

There are, however, issues. Sometimes, the scoring system can (intentionally or otherwise) convey some pretty alarming notions. One note: while allowing any of the (white) hostages in a level to be hurt will ruin your chances for three stars, the same is not true for other noncombatants. In later levels, a character type is introduced: a young Latinx man, unarmed, who will flee at the sight of SWAT. These can be arrested for points, but their deaths are largely inconsequential to your score. In fact, you can deliberately murder these unarmed teenage POCs without losing even one shiny star.

Hey! That seems a whole lot like it’s touching on fraught contemporary political issues, which is not gonna ruin my irreverent retro-themed fun! Why don’t we level some apolitical criticism at the game? With certain levels, achieving three stars feels like more of a chore than a satisfying challenge. One level ⁠— set on an airplane ⁠— required a fairly slow approach to manage sudden waves of enemies; and only once I had fought my way tooth and nail to the cockpit did I discover that a hostage had been killed off-screen. Whoops, restart. Other times, enemies will ambush you right as a level begins. Chalk it up to personal taste, but these always feel like meaningless gotcha moments, like a poorly-constructed jumpscare.

From the electric guitar riffs of the soundtrack to Off Duty Guy’s one-liners, Door Kickers makes its tone abundantly clear. This is a silly, over-the-top, tongue-in-cheek action schlock video game. Add in some grumpy old ladies, a bunch of green zombies, and some glowing donuts, and you’ve got a party. It’s just a shame when that party gets crashed by a dark-skinned suicide bomber rushing in, flailing his arms and screaming in indistinct, vaguely Arabic-sounding gibberish. That definitely makes things… uncomfortable. But let’s save the analysis of racist stereotypes for our media studies class and just enjoy the game!

From an audiovisual standpoint, there’s plenty to enjoy. Guns sound great and make combat feel weighty and dangerous. The use of lighting and color makes for some truly striking images, even for something as simple as a cloud at sunset. Animations are also eye-catching, creating memorable images like that of a light fixture swinging back and forth, fitfully illuminating a blasted roomful of corpses.

There are some other shortcomings worth noting. The sound design for melee fighting is pitiful. Although it’s not a frequent occurrence, melee combat is supposed to be one of Agent Fergie’s specialties. Sadly, hand-to-hand combat feels limp, and it never felt badass to dispatch a foe that way. Furthermore, while the visuals are usually pretty, they can become busy and difficult to read at a glance.

Door Kickers: Action Squad has three modes, including the Classic Mode discussed above. Infinity Tower lives up to its name, challenging players to tackle increasingly difficult, randomized floors until their inevitable demise. Meanwhile, Zombie Invasion Mode offers a tromp through the classic levels, albeit with a heaping helping of the undead. Both are fun diversions, but zombies become tiresome to fight as time goes on, and adding them to already lengthy levels isn’t necessarily an improvement.

You can also grab a friend and play co-op. This feels like the best way to play Door Kickers in terms of meshing the tone and the gameplay. There’s an added ability to coordinate, which is an exciting expansion of the tactical options at your disposal. However, there’s also an added chance that your partner will bust a door down and confidently put a bullet in a hostage’s head. It’s exactly the combination of tactics, mayhem, and sudden tragedy that Door Kickers deserves.

Game description: Breach and clear and give ‘em a taste of your pop’s old Garand. Select your character and loadout, use your Strategic Points and Gear judiciously, and keep your wits about you as you prosecute an absurd facsimile of SWAT operations in Door Kickers: Action Squad. Mow down terrorists and bank robbers, fend off hordes of the undead, harass the elderly, accidentally get crushed by the elevator. Maybe snag a donut or two along the way.

Door Kickers: Action Squad feels like an action movie straight out of the 1980s, through and through. It’s often problematic, but it is undeniably a solid side-scrolling action title that’s consistently satisfying to play.