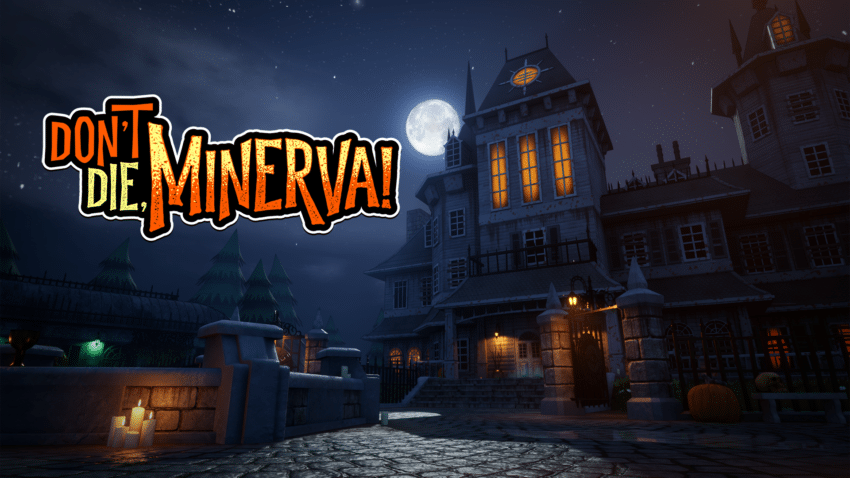 One of the compelling elements of Roguelites is the series of decisions you have to make over the course of your run. In The Binding of Isaac, you might be deciding how to spend bombs — do you hunt for the secret room? Blow up a tinted rock to get the goodies within? Destroy an obstacle to a chest just out of reach? In FTL, you might be deciding how to spend your scrap, balancing the importance of repairs and fuel with extra firepower and upgrades for the ship. Or you might chart out a route, with considerations for resource-gathering, fuel expenditure, and the ever-pursuing rebel fleet.

Don’t Die, Minerva! is already successful in a few important areas. The combat is currently its most prominent feature. Basically, Minerva battles the ghostly inhabitants of the mansion she’s exploring, using her flashlight and her stuffed animals — brought to life by the house’s magic — to banish them. When it really pops off, the combat is a tense dance through a barrage of projectiles, tactically deploying a monkey (or maybe a dragon!) and blasting ghosts left and right.

Enemy variety is an important part of keeping these fights interesting, and while this will likely need to be beefed up ahead of release, the current roster is promising. For instance, one variety of ghost is shielded at its front, and it shoots projectiles in bursts, resting for a few seconds, allowing you to circle around and hit its back. Alternatively, you could deploy a stuffed friend to occupy it while you strike at its exposed rear. It’s nice when varieties of enemies force you to change up your tactics while providing options for how you tackle them.

Other features, while smaller or less frequent, combine and contribute to the game’s overall strengths. The aesthetics feel cute and spooky, like something out of a Halloween cartoon special. The shop presents a random selection of items, and you can spend money to be presented with a different selection. This is particularly helpful when a legendary item or a health drop appears, saving your run. The items themselves drop frequently, consumables or pieces of gear that can provide flat stat upgrades, special powers, or which can synergize with one another to create a uniquely powerful run.

All that said, there are elements that Xaviant could stand to tweak or emphasize. Two major issues, which are interconnected, are difficulty and boss design. On normal difficulty, there seems to be a considerable spike between the Mansion and the Garden, particularly when facing off against the cackling, spinning ghosts of the latter.

Currently, the only boss of the game (not counting minibosses, which are typically larger versions of generic enemies), the Master, doesn’t present enough of a compelling challenge to be satisfying. The fight is something you trudge through, as opposed to dancing back and forth with a worthy opponent. It would be helpful if the fight had a greater sense of rhythm and flow; if his attack patterns were more dynamic and interesting to learn.

Furthermore, each area (the Mansion, the Garden, and the Crypt) features a variation on this exact fight, but the differences don’t feel very significant. Most of the combat has good pacing and it definitely captures some wonderful moments of tension and catharsis; it would be nice to see the boss fights developed to match that standard.

These are the most glaring issues with the current build of the game. Otherwise, it would simply be nice to see the Roguelite framework of items and resource management to be expanded or emphasized a bit. Currently, money can either be spent on a selection of items at the shop or on a cauldron full of random items (both of these can be unlocked/upgraded with Essence, the long-term resource whose upgrades carry over between runs), both of which are nice options to have. However, other spending options (or upgrades for those already in existence) would keep things engaging while making non-combat gameplay more compelling.

Plenty of games these days launch utterly infested with bugs; rushed and sloppy releases are sadly par for the course with many studios. Xaviant, meanwhile, has a fun, playable build of their game ahead of their Early Access release. While Don’t Die, Minerva! is not bug-free, and it could use some tweaks to its boss design and its difficulty curve, it shows considerable promise. Combat is fun and tense, and the Roguelite elements at play can yank a doomed run back from the brink. And there’s just a lot of novelty watching a red monkey splatter a ghost into ectoplasm with a banana.