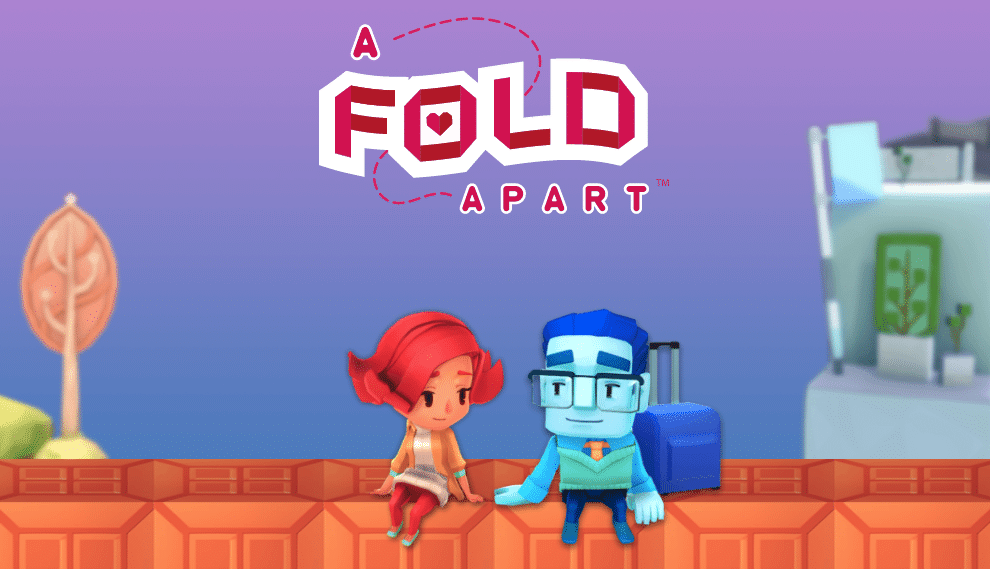 A Fold Apart immediately jumps off the screen and shows you what it’s about. Colorful, stylized visuals are paired with sweet, calming piano melodies to set the mood. You select your couple (four different gender pairings are available, a nice touch), the circumstances of your long-term relationship are established, and then you jump into the puzzles.

Throughout a roughly five-hour journey, the main characters, an Architect and a Teacher, are tested and strained, as is their relationship. The two must navigate the tension between their lives as individuals and the life they seek to build with one another. It’s a touching story, and the puzzles which constitute the main form of interaction are well-designed and satisfying to piece together.

Unfortunately, the game is held back by repetition, muddy choices and motivations, and frustrating controls, as mechanics are layered on top of one another. Can the Teacher and the Architect hold their relationship together? Perhaps the better question is: can A Fold Apart hold your interest long enough for you to find out?

A recurring theme of my run-through of A Fold Apart was the discovery of a deceptively simple solution to a puzzle. Put another way, I tended to overthink many of the game’s brain teasers. Part of this is the nature of the mechanics and how they play with perspective. Puzzles take place on a sort of page, which, as you progress through the game, you’re able to flip, fold, or rotate. If you’re navigationally challenged like me, these mechanics will be fairly disorienting. However, rather than being a drawback, this disorientation becomes a part of unraveling the puzzle, encouraging you to experiment with different moves and see what sort of progress they facilitate. The consequence of this is that puzzles rarely feel too easy or repetitive, and you often have a period of trial and error until the solution can be divined.

The puzzles themselves have fine-tuned difficulty and elegant, satisfying solutions. A given stage might require you to claim a star or merely find a path forward, often with the appearance of moveable blocks and platforms that vanish if they appear as a result of a fold. Once you become familiar with these elements, there is a clarity to the tasks you’re required to carry out – albeit with a wrinkle to a given problem that makes working out the answer engaging and worthwhile.

Less worthwhile is the time spent grappling with the controls. Early on, there’s a certain sluggishness to the way the player character clambers up onto a ledge, but this is a minor gripe and still fitting for the game’s relaxed pacing. Problems mount as mechanics are added to proceedings, especially the ability to fold from the corner of the page. Puzzles become considerably more frustrating when one of the most persistent obstacles is the finicky nature of the controls.

As relationships are nuanced and subjective from person to person, it’s tricky discussing the merits of the game’s story. One issue I personally had stemmed from the central conflict. Essentially, the main characters don’t want to live in the city, particularly the Teacher, but the Architect needs to live there to carry out their contract, a huge step in their career. Over time, the Teacher becomes increasingly frustrated with the situation, even wondering whether the relationship can survive the strain the distance brings. It’s a fine enough conflict on its own, but the game seems to sway back and forth on whether the contract is a career-making step or merely a matter of professional pride. If it’s vital for their financial security, the Teacher’s concerns become considerably more selfish. If it’s not, then the reverse is true. Without getting into spoilers, the ultimate resolution of this tension is messy and unsatisfying.

However, if the plot and ideas of the story don’t exactly stick the landing, the emotional impact therein is preserved by the stellar audiovisuals and charming dialogue. So much is conveyed about each character visually. The fonts representing each person’s inner thoughts contrast with one another – for the Teacher a flowy, aesthetically pleasing script, and for the Architect a precise, rigid font – and illustrate key aspects of their personalities. Their surroundings and how they evolve also reveal important character details, reflecting their desires and anxieties. Equally important is the dialogue, which feels very true to life as a representation of the way significant others text one another. The couple’s exchanges are crammed with charming moments, like how they will type out a message, then quickly delete it and write something else. They banter and flirt, and even though many moments in their overarching narrative feel melodramatic, the relationship between the Architect and the Teacher is sweet, heart-aching, and authentic.

A Fold Apart is a charming, sweet game that is sometimes held back by murky character motivations and weak plotting. Still, with robust puzzles, realistic dialogue, and beautiful aesthetics, the game is certainly worth checking out for romantic types and brainiacs alike.