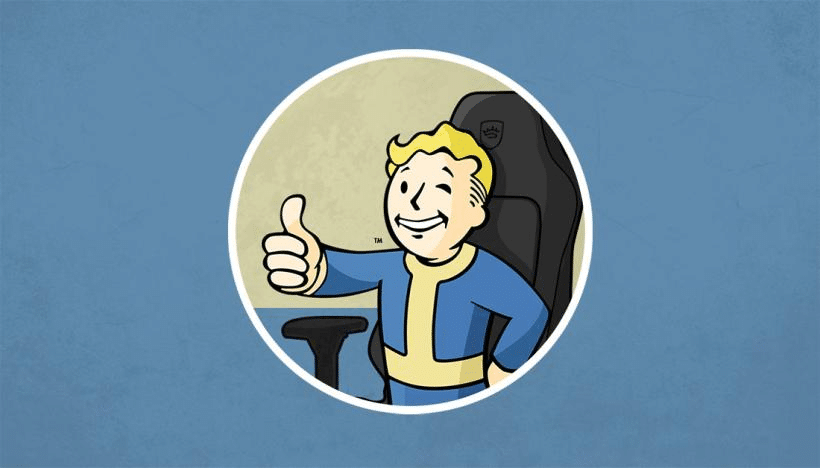 Ergonomic computer chair designer noblechairs is announcing a multi-year partnership with game publisher Bethesda Softworks. This partnership will see the manufacture of licensed products whose designs are inspired by Fallout, The Elder Scrolls, DOOM, RAGE,  and Wolfenstein, in addition to future games released by Bethesda. While their designs are not yet finalized, Fallout and DOOM chairs will release in Q2 2020.

Pictured below is concept art for the Fallout edition. The final product may vary in terms of material and appearance, but its basic design features remain fixed. Featured on the chair will be Vault Boy and Vault-Tec logos, along with the phrase “Prepare for the Future,” and the palette of blue and yellow associated both with Vault-Tec and Fallout.

Concept art isn’t yet available for noblechairs’ take on Doom. However, according to their press release, it will use military green as a color foundation, with the Doom logo stitched in white on the headrest and the Doom Slayer’s Club logo on the back. Fittingly, the backrest will feature a “blood red” Slayer Glyph.

Management at noblechairs are excited to take on this project. Steven Levitt, the Business Development Manager, called Bethesda “one of the industry’s most respected and accomplished game studios in the world. A partnership with a global high-end gaming chair brand is a great match for those who want to play games in comfort.” Also quoted in the press release was Senior Product Manager Glen Rhodes. “As a huge fan of Fallout and Bethesda’s various other properties, it’s a dream come true to be able to pair the premium quality and ergonomics of noblechairs with one of the greatest game designers around.”

Hopefully, this licensed product deal can proceed without a debacle similar to the Fallout 76 duffel bag controversy in 2018. Fans were disgruntled when they received cheap nylon bags rather than the expected canvas material. At the time, the misstep was reported on by everyone from Jim Sterling to Forbes. Wisely, and as noted above, noblechairs specifically stated in their press release that neither appearances nor materials were finalized.

Bethesda, meanwhile, recently released Doom Eternal to critical acclaim. The sequel to 2016’s Doom reboot currently holds a Metacritic average of about 88 across its platforms. For more from the publisher, you can check out their website at www.bethsoft.com. For more news and information on noblechairs, www.noblechairs.com is the place to be. And of course, stick around at High Ground for more news, reviews, guides, and coverage on both games and hardware.